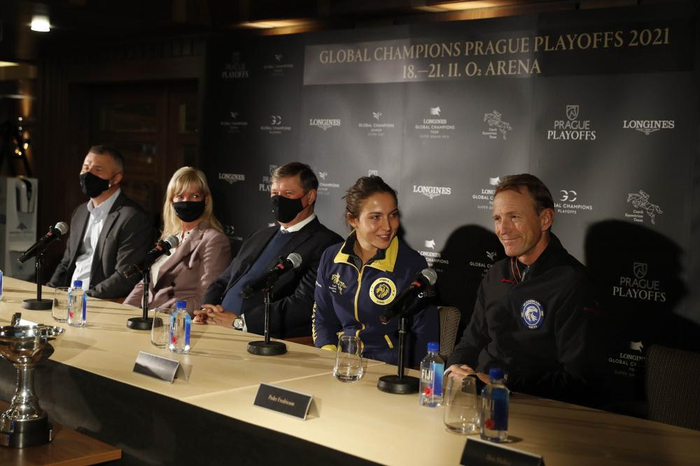 The world’s best show jumping stars declared the 2021 GC Prague Playoffs officially open with current Longines Global Champions Tour Championship winner Peder Fredricson revealing: "Anything can happen this week which is why it is such an interesting format.”

Excitement and anticipation has been building for the third edition of the GC Prague Playoffs, which kicks off tomorrow, Thursday 18 November, with the GCL Super Cup Quarter Finals.

Speaking today in a pre-event press conference to officially launch the event, Jan Tops, President and Founder of the Longines Global Champions Tour and GCL said: “Throughout 2021 we have had to make some adjustments right up to a few months before the events but we were very lucky to have great partners of event organisers who have been flexible with us and that is one of the reasons we have managed to pull it off this year. Without this amazing facility and the atmosphere we have here in Prague, our sponsors like Longines and of course one of the many to make this happen, the Kellner Family it wouldn't be possible and we are all proud to be here.”

Reigning Olympic Champion Peder Fredricson said: “I really enjoy being here, it is a fantastic city and this is a show we are all looking forward to with the best horses in the world and against the best riders - for really good prize money so we are very excited for this weekend."

GC Prague Playoffs Event Director Jan Andrlik explained: “The success of the first two GC Prague Playoffs’ means we needed to make this year even bigger and better for the riders, for the horses and for people coming to the show - it was a challenge but I really hope we are able to meet this challenge for the public. We have a brand new set up for the arena with new artists shows as well, it will be fascinating for all the family.”

Talking about the anticipation ahead of this week’s event Anna kellnerová said: “We are going to be pushing to make it into the Final. As I am a member of the Prague Lions and a team manager I have to say we have come here to fight. I think it is hard to say which three teams will be on the podium because we have seen over the years that even the best teams in the season came into the Prague Playoffs and performed differently to what we expected. I do think it is open to all the teams and it completely depends how the teams have prepared physically and mentally for this."

Jan Tops added that the atmosphere was second to none, making the vast arena feel intimate and electric during the competition: “In our sport the Playoffs is something unique, for the riders, it is what they look for and they build up for. The GCL team managers want their teams to peak this week, they can make up for the whole year as they start on zero and there is amazing prize money.”

This afternoon saw a warm up for the international field, giving the horses a chance to see the arena for the first time this year and flex their muscles in Prague. Tomorrow’s first CSI5* competition will start at 15:00 local time with the GCL Super Cup Quarter finals starting at 20:00 local time. All the action will be streamed live on GCTV.