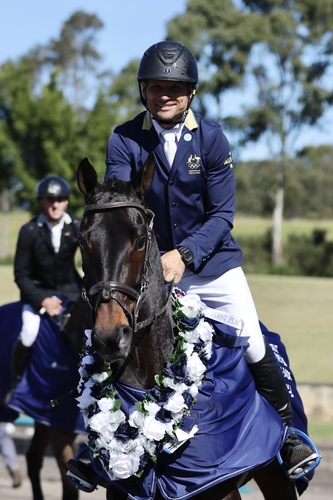 Shane Rose and Be My Daisy, winners of the Bates Saddles CCI4*-L. Photo Credit: Ashley Grant

Picnic hampers were out and glasses of bubbles under a stunning Mother’s Day Sydney blue sky for our final day of the Ariat Sydney International 3 Day Event.

The Victorian Racing Club supported today’s event with the Lexus Melbourne Cup on display, the trade village was busy selling equestrian wares with live music adding to the vibe.

Close to 280 rider and horse combinations competed in the final show jumping phase of the event. Spectators had a wonderful birds’ eye view of the top classes in the main arena from the covered stands and VIP areas.

Many of our most experienced riders were very busy with multiple mounts across the CCI3* and CCI4* classes. Shane Rose not only fulfilled his Event President obligations, but also managed 5 horses in the top classes and ended up in the ribbons with almost all.

Shane Rose also won the Equestrian NSW CCI4*-S on ‘Virgil’ despite dropping a show jump rail. Jess Rae on ‘Fifth Avenue’ continued to climb the ranks, finishing in second following a clear round, causing Sam Jeffree on ‘Woodmount Lolita’ to drop into third.

The Kohnke’s Own CCI3*-L saw no changes to the top three after yesterday’s cross country, with Shenae Lowings on ‘Dotti’ leading the class start to finish with a clear show jump round. Olivia Barton on ‘Hollyander HG’ and Shane Rose on ‘Matrixx’ finishing up in second and third, respectively.

The 4Cyte CCI2-L was won by Sam Jeffree on ‘Santoro’ and Jess Somerfield on ‘HB Zara’ led the Bowral Kubota CCI2-S from start to finish.

The inaugural Ceva Grassroots Championship was won by Thomas Irwin on ‘Willwong’ for the CCN1*, the EVA95 Champion was Amelia Dart on ‘Arakoola Bronze’, the EVA80 Champion was Olivia Waugh on ‘Vishala Dikson’ whilst the EVA60 champion was Simone Brazel on ‘Hoolander’.

Congratulations to all the prize winners and a big thankyou to the committee members, ground staff, officials, volunteers and riders for an exciting and action packed three days.

More information about the event can be found at www.sydney3de.com.au