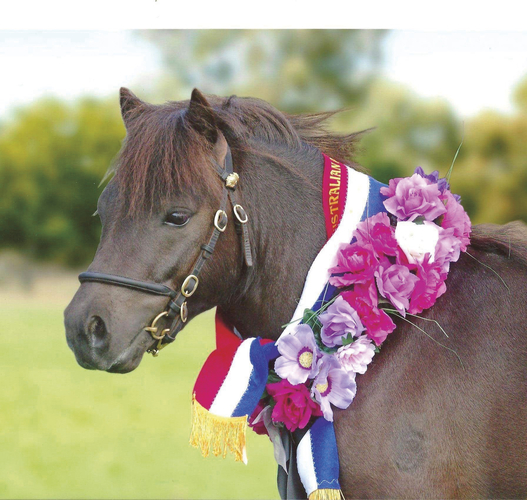 Rouse in his showing days

Emma, tell us about your Rouse. He is officially known as Caspar Creek Salem, and he is a fully registered, broad ribbon winning small Shetland. He is all of 81cm, but he is convinced he’s 18hh. He originally came to me as a “security blanket” for my high maintenance competition mare. She has since become a broodmare so he joined the “footy trip” type atmosphere of being the companion pony for both stallions — at home and away. And yep, he is undoubtedly the one in charge!

What was your Rouse originally bred for and what does he excel in? I don’t know a lot of Rouse’s early history. I do have some lovely photos of him being shown by his stud. He is an absolute saint of a Shetland — all jokes aside of the usually notorious reputation small ponies have. He has put up with my mare being ultra-clingy and not one, but two stallions endeavouring to assert their authority. He puts them back in their place and does a ripper job grooming up to about their elbows.

I have broken him to harness as that seemed the logical thing to do as a horse person, but he has come into his own as my “spare” dog. 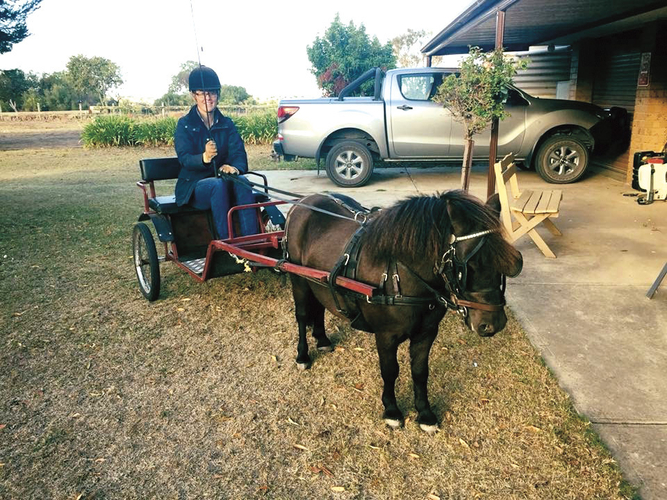 What made you use Rouse as a triathlon training buddy? I more or less changed sports five or so years ago, leaving my eventing days behind and taking up triathlon. I soon discovered that long runs are particularly boring on your own. I should note that I didn’t just decide to dabble in short-course, I more or less went straight to long-course triathlon; pet event half Ironman, 1.9km swim, 90km bike, 21km run (but I really like racing the full distance), and 3.8km swim, 180km bike and 42km run. My actual dog at the time was a geriatric Kelpie, so I figured running beat lunging, and Rouse got the gig! Since then I have gained an older Dalmatian, Sam, and big run weeks (can be up to 100km) knock him around, so he and Rouse share the load. 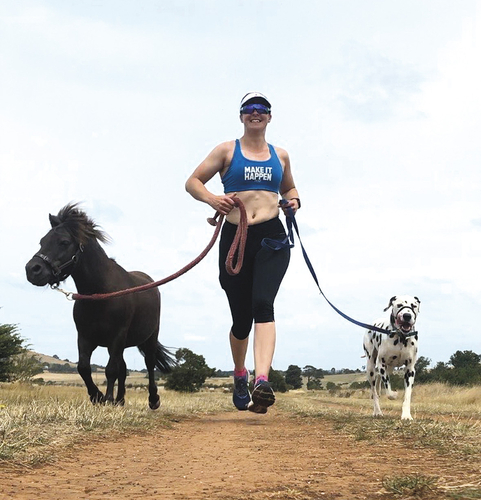 Rouse, Emma and Sam clocking up the kilometres

Are there any aspects Rouse struggles with? In all honesty, like most small ponies, while he pulls faces at the idea of “work”, he secretly loves having a job to do. There is nothing funnier than when you think oooh maybe that extra couple of km was too far and then he sees a paddock with a couple of mares in it and gets the most outrageous strut happening! He loves being able to “hoon” with me doing some speed sets (with a walked recovery) and he will crack sub-four-minute kilometres in 1km repeats.

What type of management is required to keep him sound and prepped for training? Regular farriery — I haven’t quite had to break the news to the farrier that we’re going to have to shoe the Shetland yet, but certainly keeping his feet well managed is critical. Despite living in Ballarat, he is eventer clipped (yes, fluffy ugg boot legs!). This makes life a lot easier when he runs to the point of being quite hot in terms of cooling and drying him quickly. My lovely mum did make him his own little quarter sheet for the particularly horrible days when he’d rather I ran on the treadmill!

He is also likely Australia’s only grain-fed Shetland. The upside of 40km+ a week is he can eat what he likes! Clean water, and keeping electrolytes up are also important — as any triathlete would tell you!

What comments do you receive when people see you running with your “vegan dog”? Most people who see him think he is a Labrador — and then usually do a double-take when they see he isn’t!
COVID has limited his kilometres this year. I got stuck with a horse either side of the border so he has done less running and more babysitting, but with the border restrictions easing he will gear up for a big spring/summer of running. 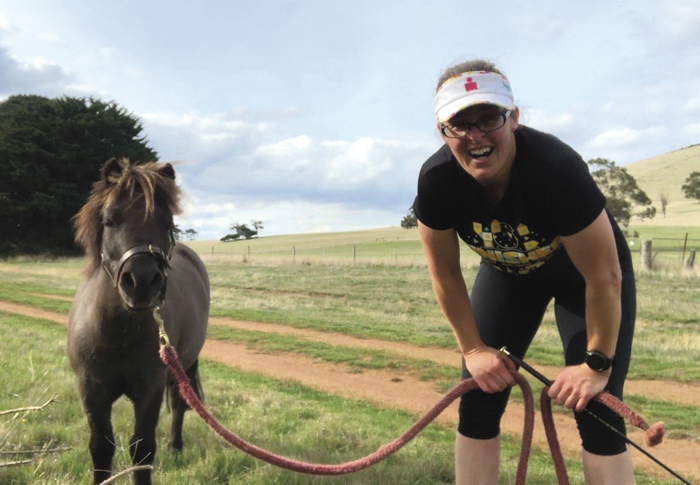