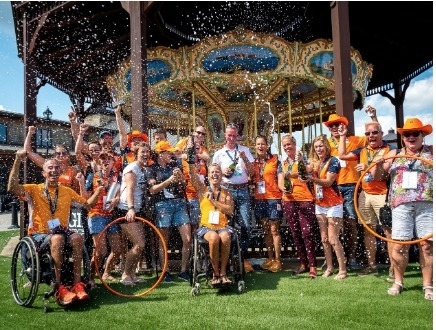 Rotterdam (Netherlands) will host the Longines FEI European Para Dressage Championships, the third to be held alongside Jumping and Dressage, from Wednesday 21 - Sunday 25 August. Some 66 riders from 21 countries will compete for medals. Who will be the riders and rivalries to look out for?

Great Britain and The Netherlands are set to renew their Para Dressage rivalry at the competition with The Netherlands clearly determined to add the European team title to the world title it famously won at last year’s FEI World Equestrian GamesTM in Tryon (USA). That was the first time in the history of the sport that Team GB lost the team competition at European, World or Paralympic level and potentially represented a major power shift in the sport.

The team competition will also see a strong challenge from the likes of Denmark, Belgium, Germany, Sweden and Norway too. It’ll be an exciting one to watch.

Ones to watch in each grade.

Italy’s Sara Morganti will have high hopes of winning her first European titles in Rotterdam. Currently the world number one ranked rider across all five grades, she comes to the championships as a double WEG 2018 gold medallist. Latvia’s Rihard Snikus will be her main challenger, and also in the mix is likely to be Germany’s Elke Philipp and the Nordic trio of Jens Lasse Dokkan (NOR), Anita Johnsson (SWE) and Katja Karjalainen (FIN).

Grade II will likely see the continuation of the constant tussle for medals between Austria’s Pepo Puch and The Netherlands Nicole Den Dulk. The pair part of a quarter of riders (the other two being Great Britain’s Sir Lee Pearson and Denmark’s Stinna Tange Kaastrup) who swap places on the podium regularly. Puch comes in as a double gold medallist from the 2013 and 15 Europeans, and the individual champion from 2017. He’ll be wanting the double again this year, but Den Dulk will be gunning for her first major international title too.

Great Britain’s Georgia Wilson could spoil the party though, having had a great run up to these competition, and Germany’s Heidemarie Dresing could also feature.

Rixt van der Horst will be the home favourite for the titles in grade III. She’s a triple gold WEG gold medallist from 2018 (and double gold from 2014) and double European Champion from 2015. As competition records go that should be enough. However, Denmark’s young superstar rider Tobias Thorning Joergensen is currently ranked number one in the grade, and he’ll be vying for his first major title having come so close on his debut two years ago. Joergensen’s team mate Caroline Cecilie Nielsen will push hard for a medal too, and look out for Belgium’s side saddle rider Barbara Minneci as well. She’s been on the verge of a podium finish for a long time.

Sanne Voets became the first non-British rider to ever win three gold medals at a single championship when she took the team, individual and freestyle medals at last year’s WEG (compatriot Rixt van der Horst achieved the same, but later that same day). Voets is the para dressage ambassador at these Championships and rides for the home team in grade IV. She comes into the championships on the back of a stellar year so far which has seen her win a number of international competitions, and rack up personal best scores. Competition will come from Belgium’s Manon Claeys, currently third in the world for the grade, and Sweden’s Louise Etzner Jakobsson. All three of them shared the medals at the last Europeans and are likely to do the same again this year too.

In grade V Great Britain’s Sophie Wells and The Netherlands Frank Hosmar resume their Europeans rivalry. Wells was the double gold winner at the 2009, 11, and 13 Europeans before Hosmar took both titles in 2015. In 2017 Hosmar took the individual gold, and Wells the freestyle. The pair have the top two positions in the grade’s global ranking, but are closely followed by Russia’s Natalia Martyanova, who returns to European competition for the first time since 2015, where she was fourth in both individual competitions. Germany’s Regine Mispelkamp will make her European Championships debut in Rotterdam, doubtless hoping to make as impressive appearance as she did at her first world’s last year, where she picked up two bronze medals.

The competition starts on Wednesday 21 August with two days of individual competition. Then comes two days of team competition, with the best riders in each grade competing for the freestyle titles on Sunday 25 August.

Watch all the action live on FEI.tv