This article is from the September 2020 Horse Deals magazine.

When you think of the perfect horse property, Elivyn Park certainly ticks all the boxes.

Owner Elise Young, with her daughter Devyn, has made these almost five acres of horse paradise home, after just two years of renovations and upgrades.

This horse paradise is located in the prestigious horse friendly area of Bullsbrook, just 40 minutes north of the Perth CBD, Western Australia, which is the perfect place for Elise to educate, train and coach her clients.

What began as a simple, rustic theme property with the basics, has transformed to a top-quality facility for her clients and a luscious green haven for her striking western performance Appaloosas to roam on.

Featuring a four-horse American style barn with three external stables, and another four additional day yards and a large arena, Elise said the properties two-year transformation has been amazing, but there was always room for improvement, as the maintenance is ongoing. 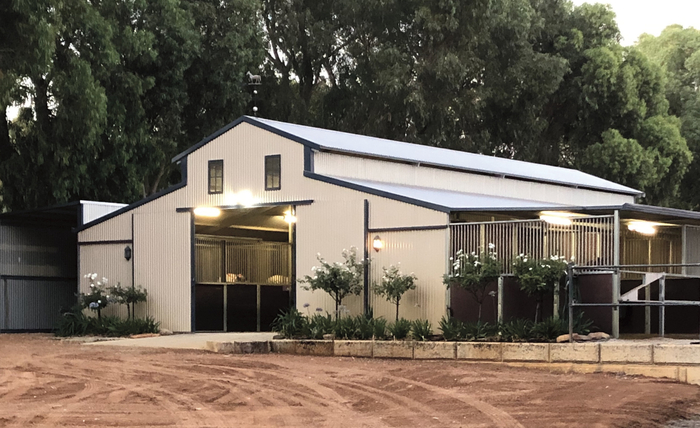 The driveway and access points had a fresh new look after Elise had contractors come in to lay some new foundations.

“The bonus with this property was, the structure was all there, but it was outdated and needed some love,” Elise said.

Elise said the house structure remains the same, with high soaring ceilings, wooden ceiling beams and a tree trunk in the main area, but the entire house, including the surrounding landscaping, has been renovated to create Elise’s dream equine facility.

Originally the property had only four paddocks with about 40 percent grass coverage, and after some new fencing and some TLC, Elise has built eight paddocks that have full grass coverage.

Everything from the arena, the driveway, to paving and access points have been resurfaced. Elise said the arena was probably the hardest part, “logistically getting trucks into the middle of the property, with little to no access points was a challenge.”

The garden has also had a woman’s touch. Elise said her mum Beverly has been the inspiration behind many of the gardens in the property.

“With the help of my mum, we took everything out. Everything had been planted for the sale of the property and wasn’t very well established,” she said. “We focused on creating some fantastic small pieces of garden around the property, including the succulent garden, which has been made to create newer gardens around the property. “While they look great, they are also effective in stopping the water run-off from neighbouring properties, as we are in the hills, so it wouldn’t affect the barn. So we built it up from scratch and started planting.

“It really has been a labour of love.” 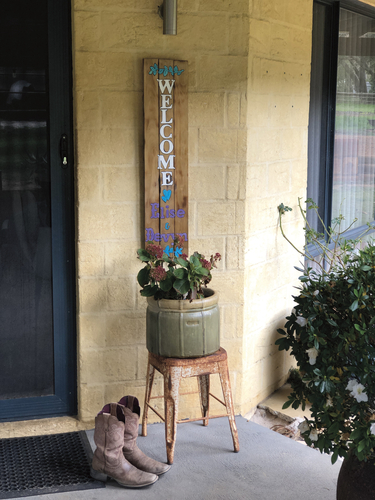 A dear friend gifted this welcome plaque to Elise and Devyn as a reminder that this home is full of love. 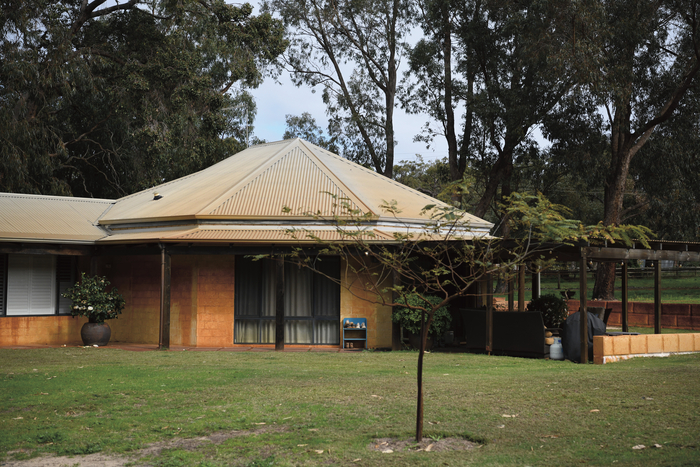 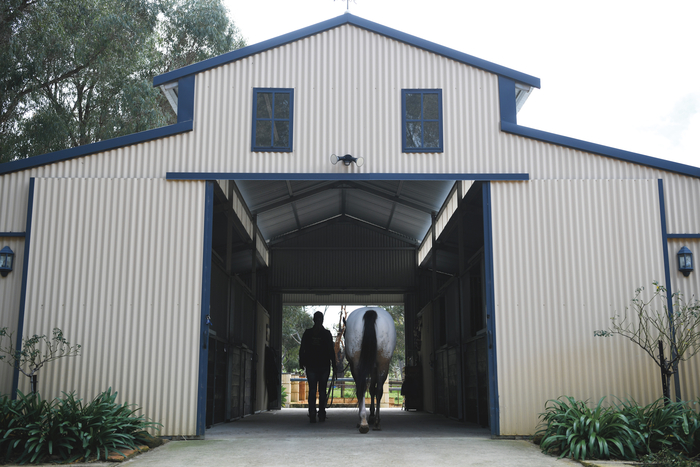 The breezeway of the American-style barn, which has four stables, a tack room and feed room. 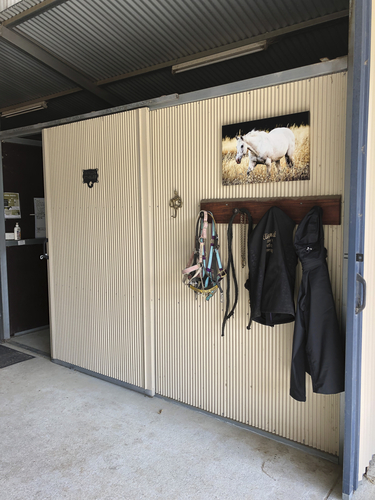 Winter in WA, means you can never be too prepared, the barn breezeway fitted out with extra equipment and jackets. 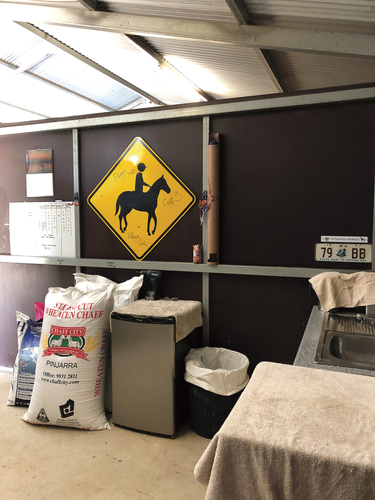 Inside the barn, a well maintained feed shed, with kitchenette, fridge and of course, the horse feed, for sometimes ten horses or more. 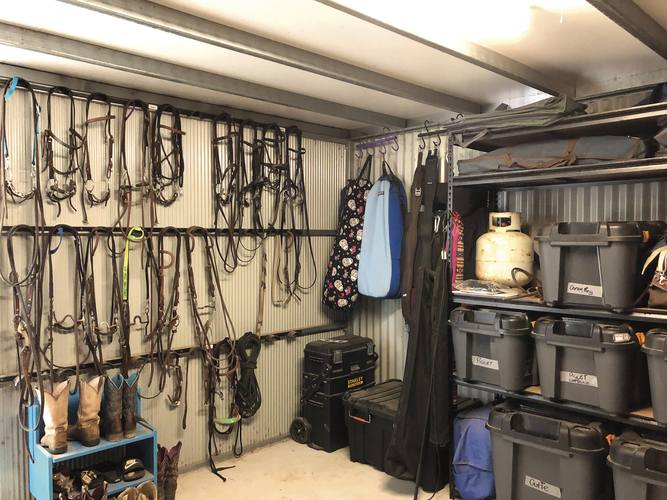 Every equestrian’s dream, a well organised tack room, fitted out and designed by Elise. 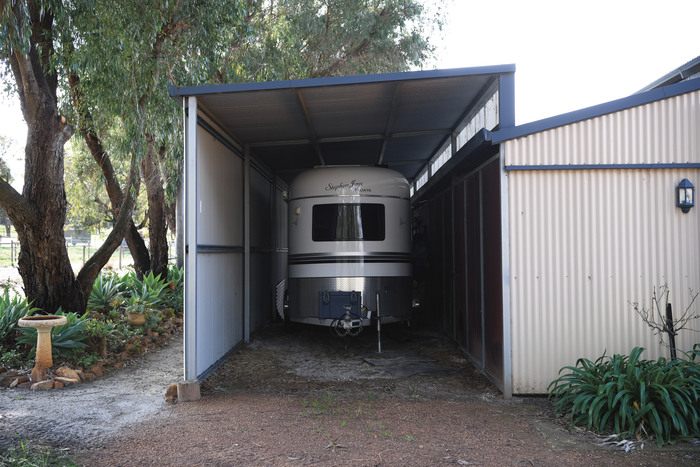 The lean-to for float parking and hay storage. 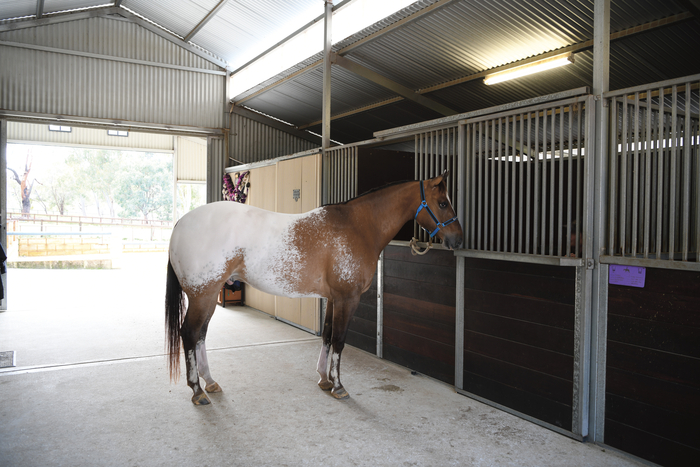 Frankie waiting patiently before being put into his stable. 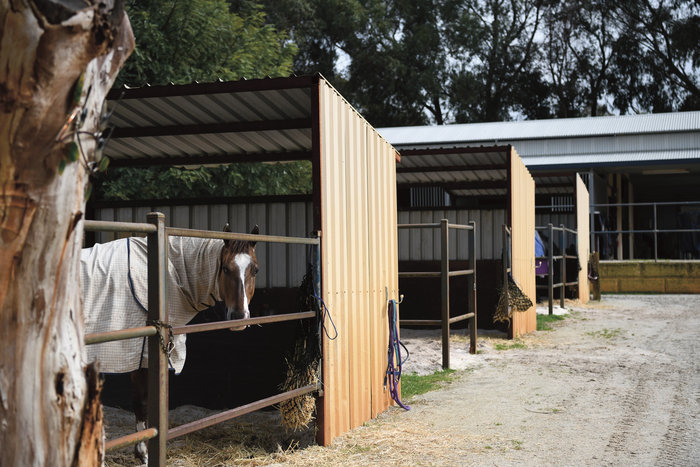 Horses in training, having some lunch in their day yards. 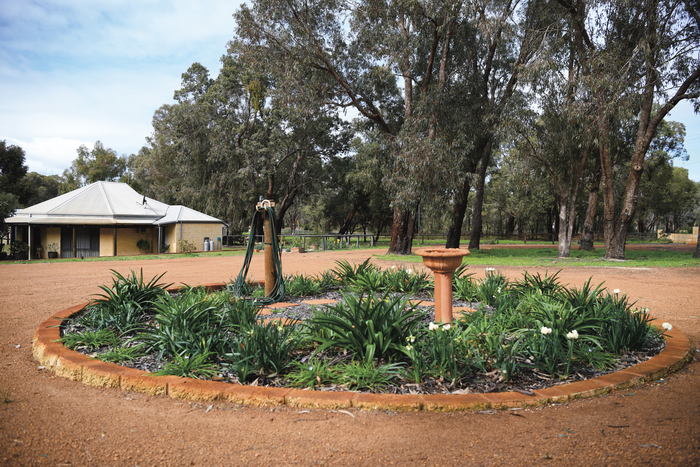 In front of the American-stlye barn is a roundabout, full of spring flowers ready to bloom. 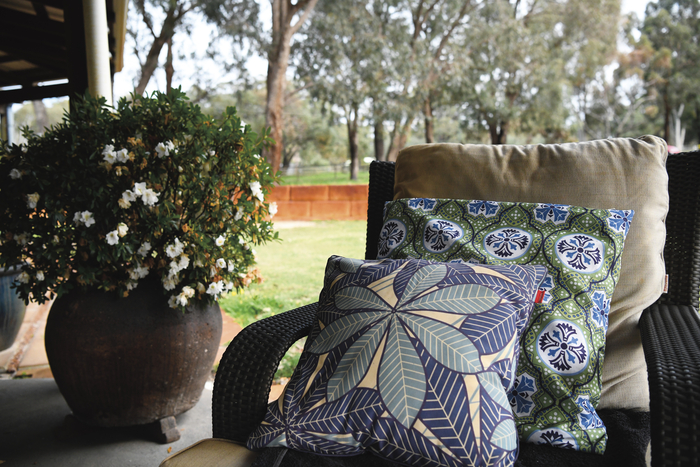 Adding the finishing touches to the verandah setting makes it a cosy place to catch up with friends or to sit back and relax after a ride. 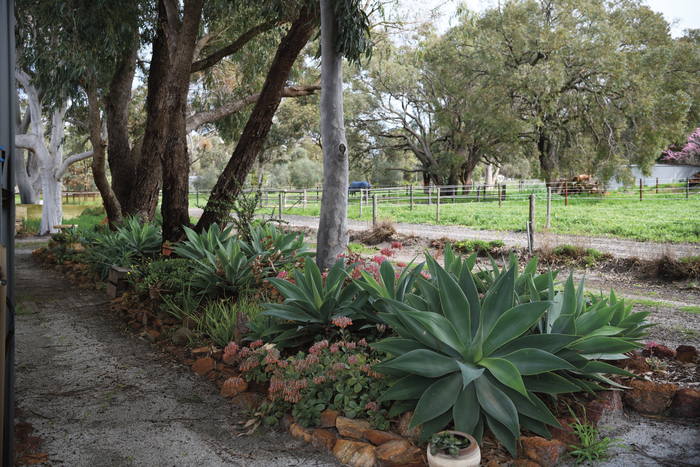 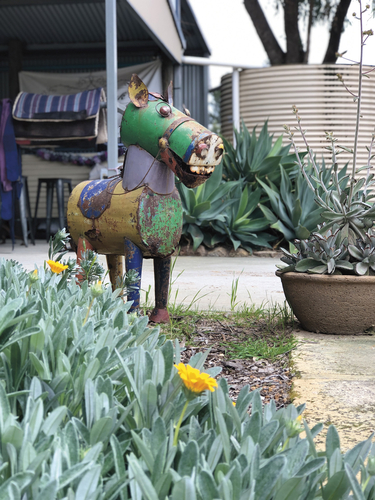 Bobby the horse was a Mother’s Day gift, who takes pride of place overlooking the arena. 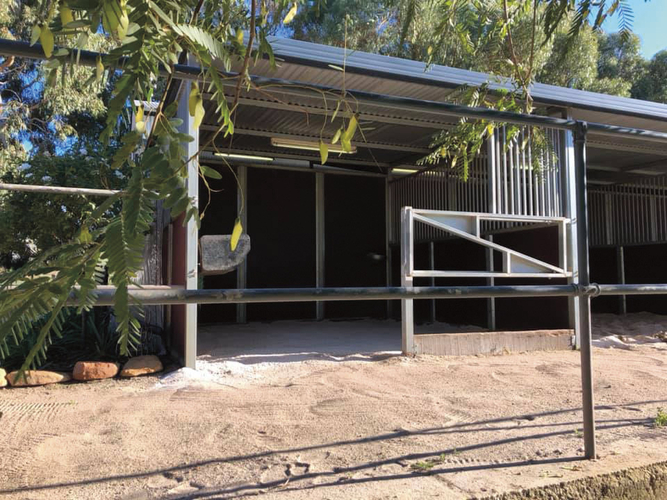 New sand and walkways have freshened up the external stables. 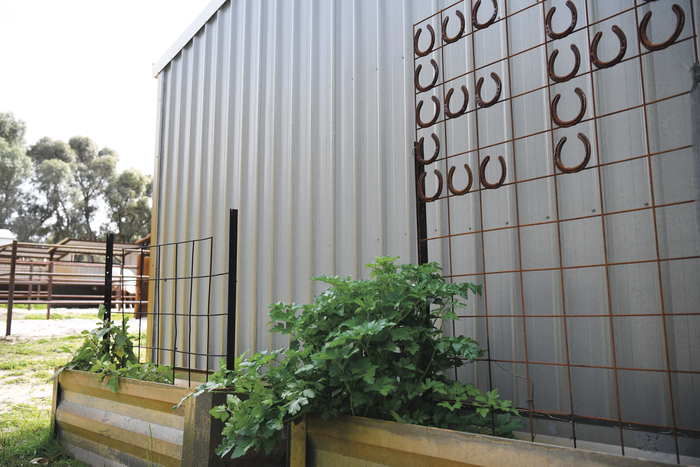 The veggie patch by the brand new shed is only a stone’s throw away from the kitchen. 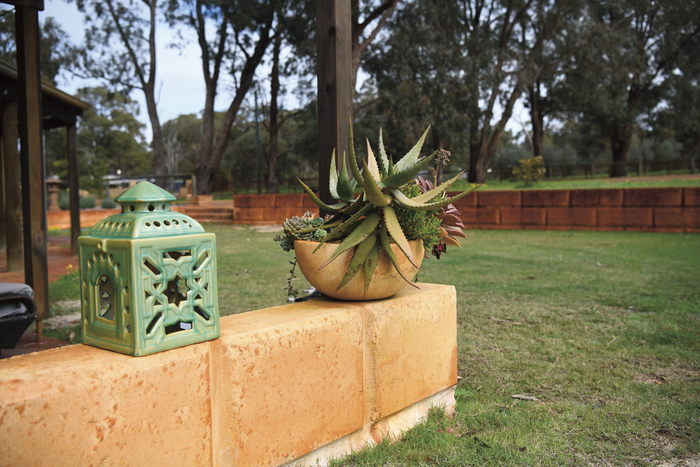 The new verandah overlooks a lush green lawn and the horse yards, perfect for a morning coffee. 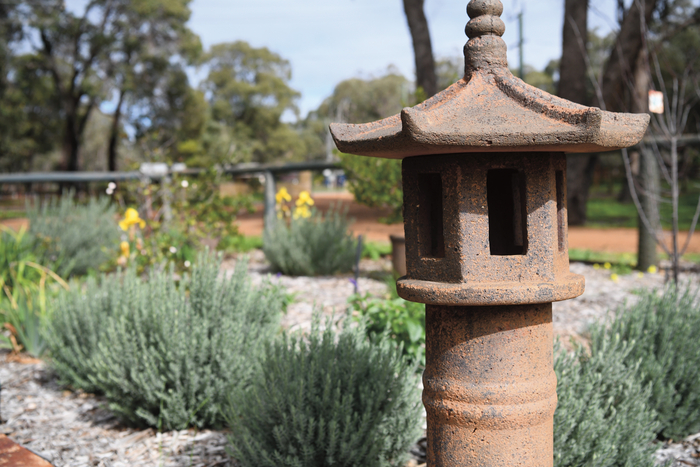 The front of the house has a cottage style garden bed, with statues and a bird bath. 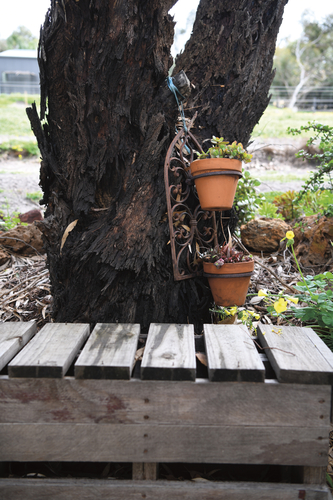 A little quiet place to sit amongst the succulent garden. 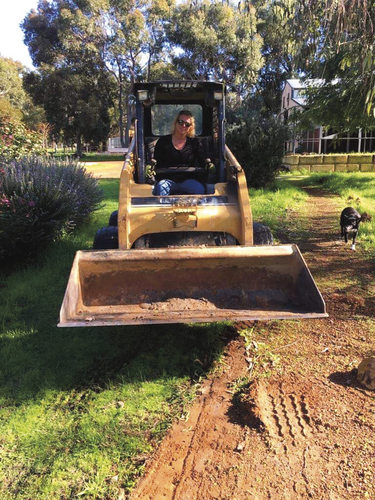 Elise got her hands dirty during her equine dream property make-over. Jumping in the bobcat, to clear the way for the perfect garden. 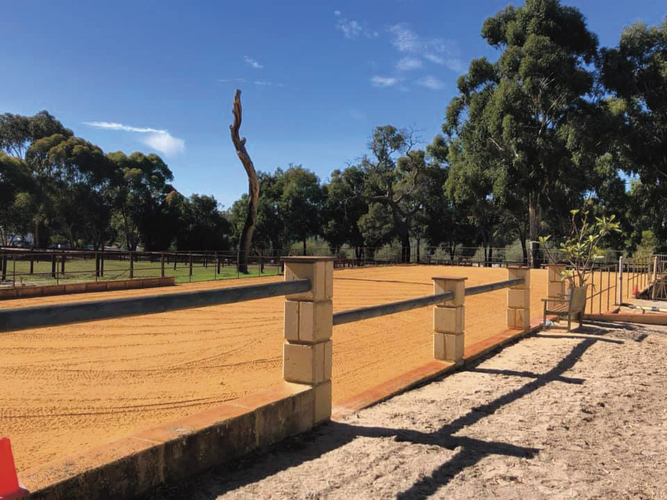 Just under Olympic dressage size, the arena has had a full resurface, a difficult task, as the arena is in the centre of the property and originally there was limited access from the road or driveway. 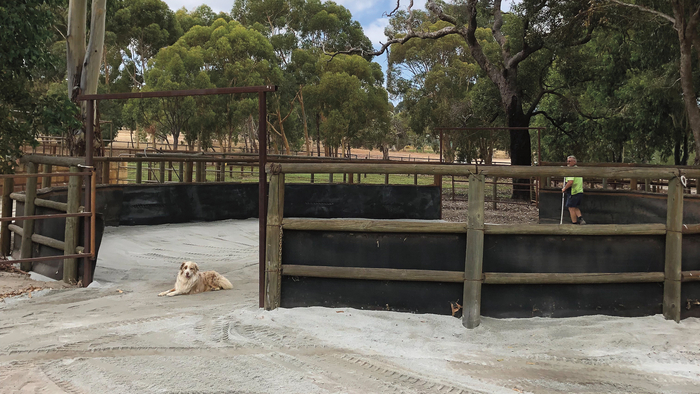 The round-yard has had an upgrade, with trailer loads of sand to fill the yard, to make it a more suitable height and to make it less hazardous. 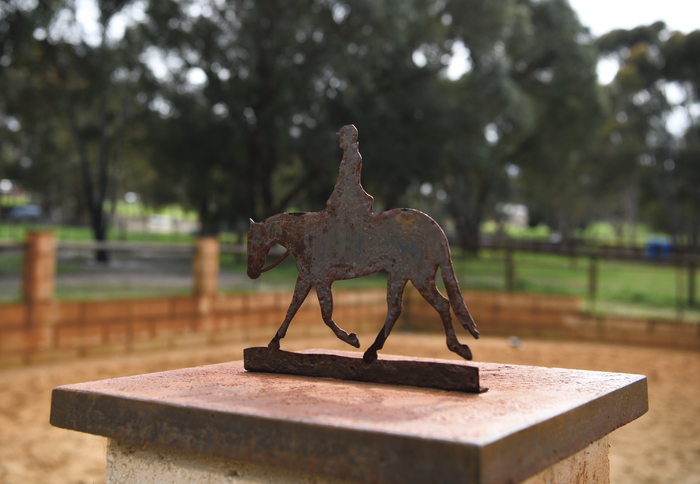 The arena pillars have decorative features, including this hunter horse, which was created from a former trophy. 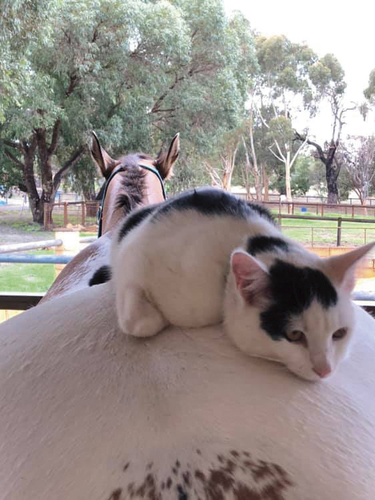 Billy-Winks the cat having a nap on Frankie, their Appaloosa. 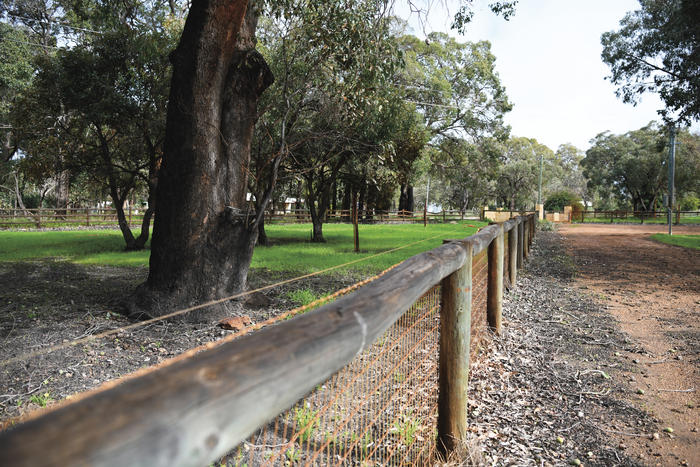 The green paddocks have had some TLC, growing from 40 percent cover or less to full coverage. 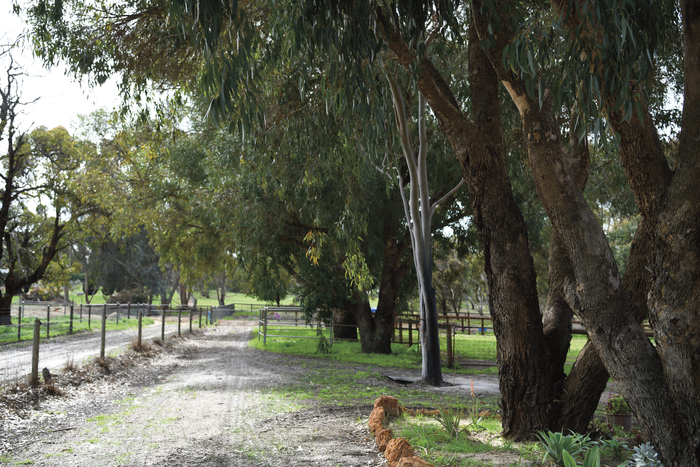 At the back of the property, there are some extra day yards. 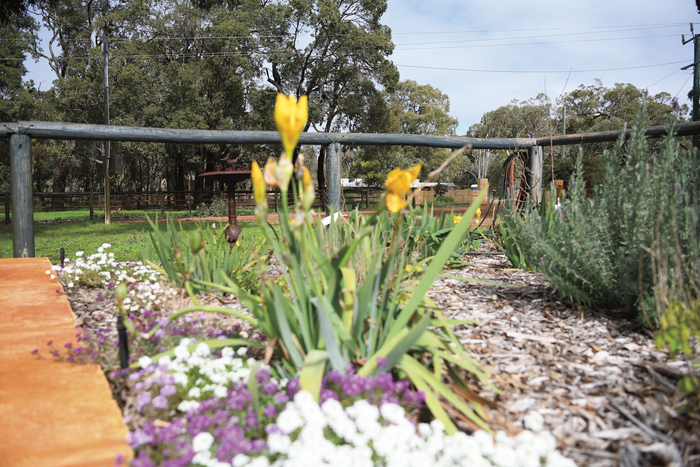 Spring is just around the corner, but the flowers are already out at Elivyn Park. 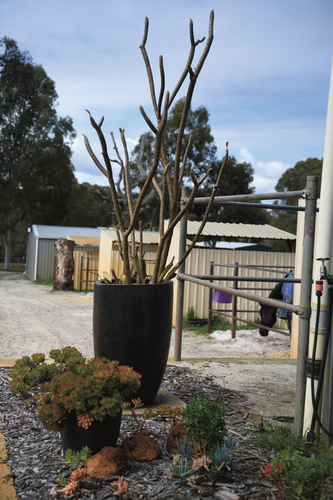 Adding some extra greenery to the four horse wash bay, with hot and cold water. 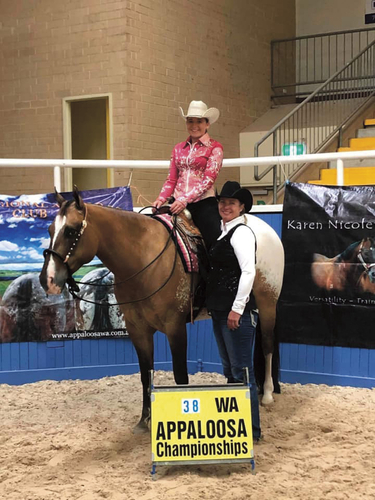 Elise and her daughter Devyn, who Elivyn Park was named after. Both mother and daughter love the western performance horse, showing, training and coaching.