The size and scale of the illegal online donkey skin trade has been revealed for the first time, with thousands of skins currently for sale on unregulated B2B websites, as well as well-known social media platforms.

These findings form part of The Global Trade in Donkey Skins: A Ticking Time Bomb report from The Donkey Sanctuary, which has uncovered how organised crime is facilitating the trafficking of donkey skins to satisfy demand for ejiao, a traditional Chinese remedy. It’s estimated that over 4.8 million donkeys are trafficked and slaughtered for their skins each year, which is used in the production of ejiao. The donkeys suffer at every point of this process, from source to slaughter, due to the brutal and inhumane conditions that are a hallmark of this industry. Even the most vulnerable donkeys, including pregnant mares, young foals, and the sick and injured are taken and traded without consideration for their welfare or their pain.

The Donkey Sanctuary’s report cites the findings of a research paper by an interdisciplinary team from Oxford University’s Saïd Business School and Wildlife Conservation Research Unit (WildCRU). The research - which the charity funded - was able to identify a clear scientific link between the illegal wildlife trade and donkey skin trade. Building on these findings, The Donkey Sanctuary has now exposed illegal trading on multiple online platforms.

The full paper - The Link Between Wildlife Trade and the Global Donkey Skin Product Network - has been published today in Conservation Science and Practice.

Evidence of 382 individual traders were identified on business-to-business eCommerce sites offering donkey hides, with almost 20% of those traders also selling other wildlife products. In some extreme cases, The Donkey Sanctuary uncovered these traders were additionally trafficking narcotics, fake passports and human hair, providing further evidence of how deeply the donkey skin trade is embedded in organised crime.

The illicit trade also extends beyond B2B eCommerce sites to well-known social media platforms like Facebook, Instagram and Twitter. The Donkey Sanctuary uncovered dozens of adverts for skins on sale on social media, which suggests that it is a thriving marketplace for the trade, with one trader in Kenya saying he had 2,000 skins available immediately. Many listings feature images of dead and dying donkeys being kept in inhumane conditions.

Unfortunately, few B2B or social media sites have policies in place to prevent donkey skin traders from taking advantage of their sites, or even to remove the traders who have existing pages. The scale of the problem is so extensive that The Donkey Sanctuary identified several traders openly admitting to the illegality of their merchandise, and even offering prospective buyers information on how they will avoid the skins being intercepted by the authorities during transit.

The Donkey Sanctuary is calling on all eCommerce and social media sites to immediately ban the sale of donkey skins and remove all existing listings from their platforms.

The continuous demand from the ejiao industry has had a significant impact on donkey populations. Many donkeys slaughtered for the ejiao trade are stolen from families who rely on them for their livelihoods, with devastating consequences for their economic prospects.

Up to ten million communities in the developing world rely on working donkeys, and where donkeys are stolen it almost always falls to women and girls to pick up the ‘donkey work’ left behind, denying many girls the opportunity to continue their education.

“There is no doubt that the global ejiao trade is having a devastating impact on the welfare of donkeys around the world, who suffer at every point from source to slaughter. This new research demonstrates just how vast the online donkey skin trade has become, and how entrenched it is with criminal activity and other illegal wildlife trafficking.

“By cracking down on the sale of donkey skins on their platforms, eCommerce and social media sites will not only prevent considerable cruelty to donkeys, but also help eliminate the other criminal activity that is taking place alongside it and support thousands of families who rely on their donkeys to survive.”

The research, by Saïd Business School and WildCRU, identified 382 traders who sold donkey skins on large B2B ecommerce websites. The researchers then analysed the full basket of goods that each trader offered for sale, creating a dataset of almost 15,000 product offerings - including wildlife products - making a clear link between the trade in donkey skins and the wildlife trade.

“Our work brings together concerns about wildlife conservation, animal welfare and the well-being of some of the world’s poorest communities, all around the unexpected focal point of donkeys. This important research has, for the first time, shown a scientific link between the wider wildlife trade and donkey skin sales, and we’re delighted it is helping shine a light on this issue.

“We found almost 20 percent of donkey skin traders operating online also sell some form of wildlife product, including species of conservation concern such as elephant ivory, pangolin scales and big cat parts. This matters because it reveals how customers shopping for donkey skins can easily stumble across other products for sale alongside these skins, potentially contributing to the ever-worsening biodiversity crisis. Unsustainable and under-regulated trade in wildlife is a major driver of wildlife declines, impacting as many as 20 percent of vertebrate species.”

Contacts: For interviews, images and information please contact The Donkey Sanctuary press office on 01395 573124 or 07970 927778 (including out of hours) or email press.office@thedonkeysanctuary.org.uk

The Donkey Sanctuary is the world’s largest equine welfare charity. Our vision is a world where donkeys and mules live free from suffering and their contribution to humanity is fully valued. We run 10 sanctuaries around the UK and Europe, giving lifelong care to more than 7,000 donkeys and mules. Our hospital treats sick donkeys and trains vets both nationwide and worldwide. Our donkey-facilitated learning programme helps vulnerable children and adults develop life skills by connecting with donkeys on an emotional and physical level. The charity operates programmes worldwide for animals working in agriculture, industry and transportation, and those used in the production of meat and skin.

Our vision is a world where donkeys and mules live free from suffering, and their contribution to humanity is fully valued. 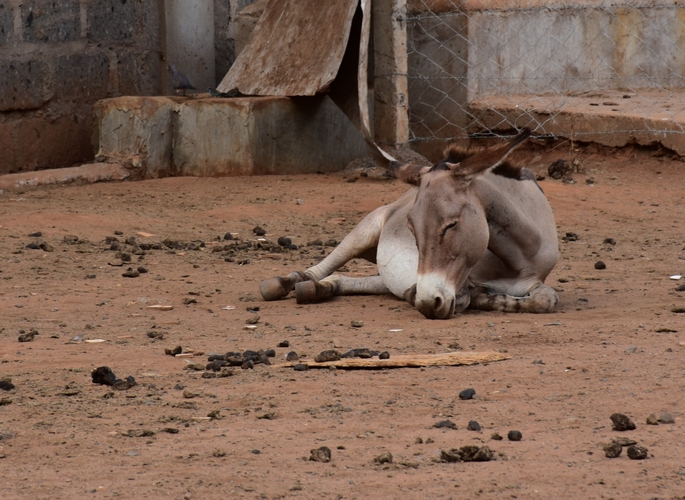 A donkey awaits slaughter at the Star Brilliant abattoir in Naivasha, Kenya. Credit - The Donkey Sanctuary 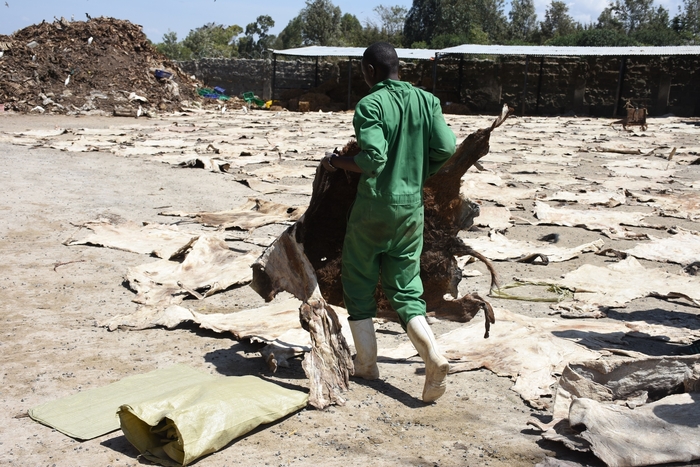 Donkey skins being laid out in the sun to dry at a slaughterhouse in Kenya. Credit - The Donkey Sanctuary

Information in this email and any attachments are private and confidential and is intended for the addressee(s) only. If you are not the named addressee(s) you may not copy, distribute, disclose or otherwise use information contained in this email. If you are not the intended recipient, please delete this email and any attachments and contact the sender. The views expressed are solely those of the author and do not necessarily represent the views of The Donkey Sanctuary. We do take precautions to minimise the risk of spreading viruses, but we advise you to carry out your own virus scan on any attachments. The Donkey Sanctuary - registered charity in England no 264818.