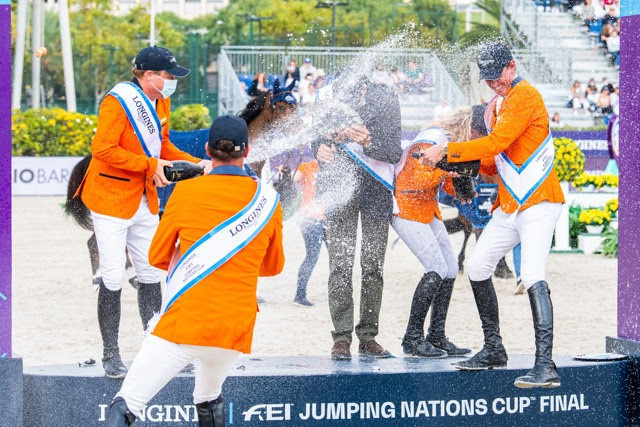 The Dutch team in celebration mood after their superb victory in the Longines FEI Jumping Nations Cup™ Final 2021 at the Real Club de Polo in Barcelona, Spain today. (FEI/Lukasz Kowalski)

For the third time since the Longines FEI Jumping Nations Cup™ Final was staged back in 2013, The Netherlands reigned supreme at the Real Club de Polo in Barcelona, Spain today. With the stoicism and quiet determination that has long been their trademark, the side of Maikel van Vleuten, Willem Greve, Sanne Thijssen and Harrie Smolders held firm to take the coveted title that never loses its sparkle.

It was Smolders who clinched it with his anchorman ride, and as he said tonight it was a close-fought affair. Team Ireland finished a very close second when counting just a single time penalty at the end of the day, while the next two nations – Belgium and Sweden – only put four faults on the board.

“Horses generally jumped this course well today and you could see how close the teams were, and that makes our sport exciting”, Smolders said. Asked if he was confident he could clinch it with a faultless run from his 12-year-old gelding Monaco when last to go he replied, “you have to be confident, that’s why they put you in that position, but then you have to finish the job and when you do that’s how dreams come true!”

At the halfway stage of the competition, Sweden and The Netherlands were the only two sides without penalties, but when Angelie von Essen (Alcapone des Carmille) hit the middle element of the penultimate triple combination and then Rolf-Goran Bengstsson (Ermindo W) also faulted twice at the same obstacle then Swedish chances slipped away.

And when third-line Dutch team member, Sanne Thijssen, hit the middle element of that influential treble then the pressure piled onto Smolders’ shoulders. Because the Irish were carrying just the single time fault collected by Eoin McMahon and Chacon 2, after clears from pathfinder Denis Lynch (Cristello) and a brilliant last-line performance from Darragh Kenny (VDL Cartello) which allowed Michael Duffy’s two mistakes with Zilton SL Z to be their discard.

Smolders didn’t flinch however, taking the pressure and delivering the winning round when it was really needed. He put the Dutch team ethic into perspective tonight when he said,

"We all work hard, we stay patient and we keep believing" - Harrie Smolders (The Netherlands)

The Irish looked really threatening in the closing stages. Kenny knew he needed a clear to keep them in the frame and, once again, he delivered. “On Friday my horse was fantastic and today he just got better and better as the round went on - he was flying! The team really pulled together and the lads rode fantastic. It was a great result, but the Dutch were brilliant!”, the Irishman said. No-one could argue with that.

Van der Vleuten and Beauville Z claimed individual bronze at the Tokyo 2020 Olympic Games and the Dutchman said today that it took nothing out of the horse. “So I was looking forward to this event in Barcelona and our Chef d’Equipe chose me as first rider for the team so it was important to have a clear round, to give a good feeling to start the day”. Having done that he then watched team-mate Greve do the same with Carambole. Talking earlier today about Greve’s great stallion, Van der Vleuten said, “if he was a person he’d be a really nice one!”

And Greve was over the moon about how his horse performed this afternoon. “Being part of any winning team is always good, but for me this is very special because I have my horse a very long time, since he was four.

“I wish he could do the press conference because it’s not about me, it’s about the horse. I owe everything to him. I’ve had him since he was four and now he’s 17 years old and still jumping his heart out for me every time. For me it’s very emotional that he shows in these days that he’s still one of the best horses in the sport, and he deserves a victory like this in the closing days of his career. I’m so proud of him”, he said, filled with emotion.

Dutch Chef d’Equipe, Rob Ehrens, was delighted with today’s result after a sometimes difficult period for his team. “We had a bit of a struggle the whole year. We had good performances but still not everything came out the way we wished. But I must give big compliments to all our riders, we all fight together, we don’t have big names who when they are winning go in a completely different direction. It comes down to these five people for the perfect management of their horses, who want to everything for their country and who showed us today a marvellous performance. That’s one of the strong pillars of the Dutch team”, he said.

This year’s Longines FEI Jumping Nations Cup™ Final had an extra buzz, because as Ehrens pointed out everyone is so grateful that at last the sport is back and everyone is enjoying it again.

“Thanks to the organisers and the team in the arena. It’s a very easy thing to say we can’t do it because of the Covid problems but everyone is very happy here and a big compliment to them all!”, he said.

Before today’s action began the crowd also got to meet Champony, the FEI’s new mascot which had the honour of ringing the bell for the first rider into the ring for the Final competition – Belgium’s Nicola Philippaerts. And the children loved it. The Barcelona Final always attracts families to this event that has real festival appeal along with its offering of top sport, and Champony, gender-neutral because it represents a sport in which men and women compete on completely equal terms, really came to life.

Meanwhile winning team member Willem Greve put today’s result, and the concept of the Longines FEI Jumping Nations Cup™ series and Final into perspective. “For myself as a sportsman, nothing beats winning with your nation in a Nations Cup!”