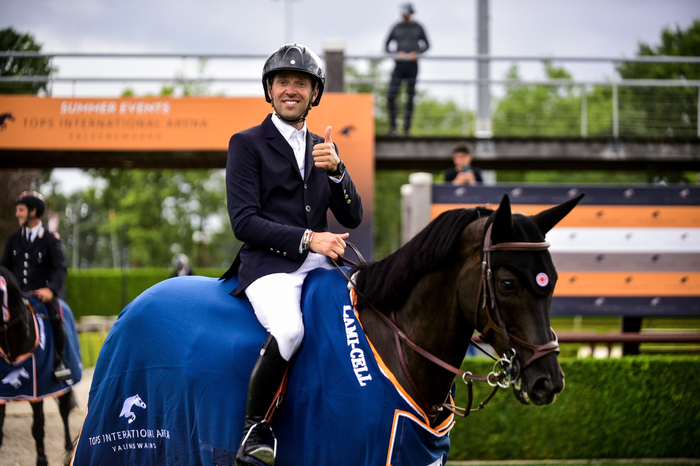 Continuing his fantastic form Emanuele Gaudiano gave it the best go possible having to settle for third in the end just 0.09s slower than Thijssen on Crack Balou. But it was Simon’s flyer to the penultimate fence and him risking it all to the last that mean he took the lion’s share of the €100,000 prize purse.

All week top riders have praised the phenomenal facilities at Tops International Arena including Christian Kukuk who said: “I always like coming to Valkenswaard because you have top training facilities, top warm ups, top rings and the whole package with the permanent stables is just one of the best in Europe. You can work with your horses under the best conditions.”

Next week the stunning destination of Tops International Arena hosts the Longines Global Future Champions event from 5 - 7 August where young talent will get the opportunity to perform on an international stage in world class facilities.

35 Young talents were at the start of the exciting Young Horses Final. Of these, 14 managed to stay clear in the first round. The six-year-olds opened the jump-off and the Dutch Joy Lammers and her gelding Damascus (Zang, Dominator 2000 Z x Ustinov) set the best time of these four. In the end, this earned them fifth place. The first seven-year-old, Cbi McGregor (Ard VDL Douglas x Karandasj) ridden by American Maria Costa, flew over the fences and improved Lammers' time by more than two seconds. No combination was able to beat this time, although Kevin Jochems, Dries Dekkers and Guillaume Foutrier, among others, made a good attempt. Several combinations made a mistake on the last obstacle. The end result was a second place for the Dutchman Jochems with Looks Good de Liebri Z (Lector van den Bisschop x Bentley van de Heffinck). Belgian Dekkers came third with the BWP gelding Pommery van het IJzeren Lindehof (Kasanova de la Pomme x Robin des Bruyeres).

CSI2*: Johannpeter flies to victory in style
It was an incredibly exciting jump-off in the 2* Grand Prix where all the riders risked everything. The challenging but fair course made use of the entire grass arena and required a lot of galloping power and speed. The first round saw 55 combinations of which 16 qualified for the jump-off. The battle for victory was fierce. Nicolas Pizarro had the difficult task of starting first. He stayed clear with Oak Grove's Enkidu (SF, Ensor VDH Pleville x Quidam de Revel) in a great time of 40.01 seconds. But that was not enough when the Irishman Jeremy Sweetnam took over the lead with Brown Star Z (Big Star Jr KZ x Numero Uno). He stopped the clock at 39.75. Belgian rider Alexander Housen is having a very successful season so far at Tops International Arena and expectations were high. Housen set a high pace and took all the risks. With that he took over the lead from Sweetnam. Housen and the ISH mare Rockwell RC (by Kannan) crossed the finish line in 39.66 seconds. His hopes of victory were dashed when Karina Johannpeter put in an amazing ride that brought the time even closer. The 38-year-old Brazilian rode a controlled and super fast round of 39.04 seconds with the SLS stallion Lucero LS La Silla (Tlaloc M x Accord II). The six combinations that came after her could not change a thing.

"I am very happy with this victory. Lucero is now 17 years old and I have been riding this stallion for 10 years. I am planning to retire him. I am very happy that he can retire in such good shape. He feels good and he could go on a bit longer, but I want to show my respect and gratitude in this way." Karina was already very happy with her clear first round: "I almost had to cry for joy because he had jumped so well. A fortnight ago we had a fault on the last jump, so I decided to try again this weekend because I think he deserves to say goodbye with a clear round. When Karina saw that 16 were starting in the jump-off, she did not know what to do, so she asked her groom, "should I go for the victory or should I just ride a beautiful jump-off? I then decided to wait and see how he would feel, that's important to me. And he felt good and then I decided to go for it. It was very emotional because I wanted him to win so much. I am so grateful to him." Karina was already at Tops International Arena in 2016: "I love it here. I am very happy that the grass is back, I am a big fan of riding on grass. The horses feel comfortable on a grass surface of this quality." 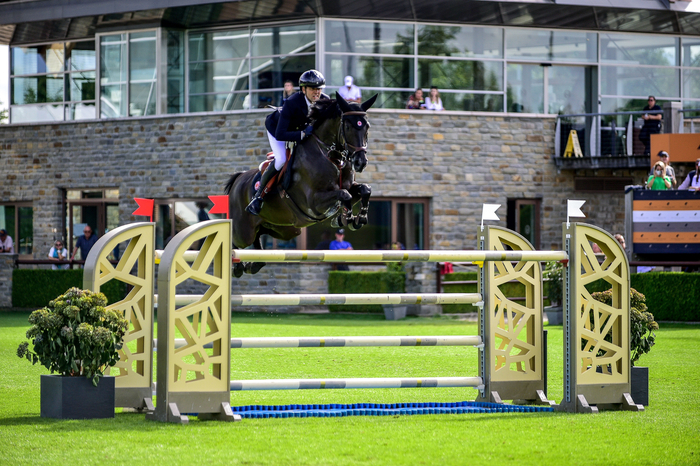 The third day of Summer Event 3 started early for the participants in the Small Tour competition (against the clock, 1.35m). A total of 17 combinations came to the start and 7 of them were clear. The Australian Evie Buller was by far the fastest with Elenoor (Holst, by Limbus). They went over the obstacles at a fast pace and stopped the clock at 60.49 seconds. The 28-year-old rider, who is married to Robbert Ehrens, the son of former national coach Rob Ehrens, has just one word for her mare: "amazing!" Second place was for Frenchman Guillaume Foutrier and the Zangersheide mare Toscane Z (Scuderia 1918 Tobago Z x HH Radco). They finished with a time of 65.07 seconds. Dutchman Michael Greve stopped the clock at 65.21 seconds with K-Star (KWPN, Big Star x Carolus H) and that was good for third place.

The 2* event ended with the Medium Tour (1.35m). 22 combinations managed to qualify for the jump-off which was convincingly won by Khaled Abdulrahman Almobty from Saudi Arabia. He was twice clear with the BWP mare Katinka VH Valenberghof (Corland x Montender) in a time of 32.93 seconds. Dutch rider Leopold van Asten came second with VDL Groep Victoria (KWPN, by Do Spiritivo). Third place was also for the Netherlands: Sanne Thijssen with her Holsteiner gelding Zeppelin Blue (Zirocco Blue x Ramiro). Yesterday she won this class.

CSI1*: Ghrayeb wins Grand Prix
In the 1* Grand Prix on Sunday morning the time allowed was also a barrier in the first round. Only seven combinations managed to stay clear within the time allowed and qualify for the jump-off. The first combination, the Finnish Noora Forstén and her Holsteiner stallion Chubakko (Connor 48 x Colman) stayed clear in 39.96 seconds. Soon this time was bettered by the Dutch Journey van Eerd and the attentive Gaudi (KWPN, Zambesi TN x Burggraaf NV). She could not enjoy this success for long, as the Belgian Guido Hornesch immediately went below her time with Nailah (BWP, Kannan x Darco). Last starter was the Syrian Shady Ghrayeb who had already shown during the previous days that he was able to set a fast time. He did the same this time. He crossed the finish line more than two seconds faster, claiming victory with Cabernet de Mas (SF, Baloubet du Rouet x Dollar dela Pierre). Second place was for Hornesch and Van Eerd came third.