This story is from the March 2019 Horse Deals magazine. 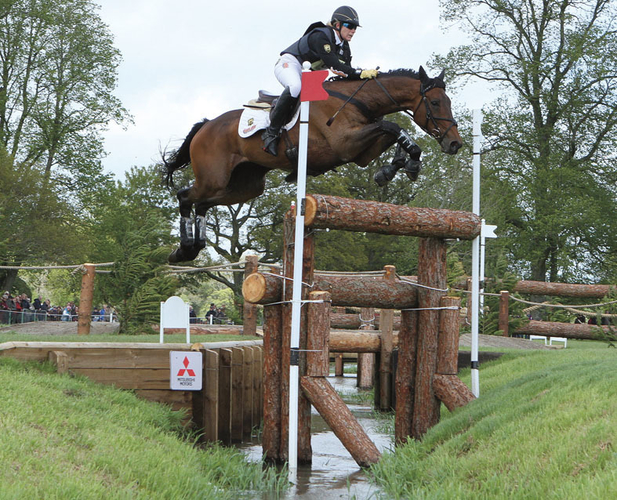 Koyuna Sun Dancer over the famous Vicarage Vee fence at Badminton 2014, where he was the only horse to jump double clear.

Apart from the annual visit home to Adelaide, Atlanta Olympic Team Gold Medallist, Wendy Schaeffer has spent the best part of the last decade based in the UK. Horses took her there, but husband, Nigel Macdonald kept her there, until now. Each year Wendy returns home for the Australian International Three Day Event at Adelaide in November and did so in 2018 with the news that she and Nigel were returning to Australia.

Is there anyone vaguely associated with Olympic equestrian sport that has not heard and been inspired by Wendy’s performance at the 1996 Atlanta Games? If there are, or perhaps junior riders who have not been educated in Australia’s great eventing history, let me refresh your memories. At just 21 and with a barely mended broken leg, Wendy rode her pony club horse, Sunburst, (she had him since she was eleven) to produce the best individual performance in the Eventing Team competition to lead Australia to the Team victory. The “kid” from Australia was the youngest ever recipient of an Equestrian Gold medal, a sporting media sensation and the ultimate inspiration for any young girl who dreams of international competition whilst attending the monthly pony club rally.

Wendy went on to win everything there was to win in Australia with a variety of talented horses. Her forte was in the jumping phases of the event and this perhaps did not do her any favors. It seemed to be the dressage scores that kept Wendy from international Team selection following Atlanta. Given Australia’s not too glorious performance in the final phase of the event, it does seem an odd decision to exclude a proven jumper from the team. A few rails down will turn a good dressage score in to an ordinary one. And now with the dressage score coefficient removed, the dressage phase is less influential, as the scores are closer together. This places more emphasis on the cross country time and the showjumping which the FEI says is a safety measure. Had they done this ten years ago, I think we would have seen Wendy on more Australian Teams. The new format would certainly suit the talented cross country rider and showjumper. Wendy is the only rider in the world to have won both World Cup Eventing and World Cup Showjumping competitions. Sadly the World Cup Eventing competition that benefited riders world wide, no longer exists. She was on the 2012 Olympic shadow squad for Eventing with Koyuna Sun Dancer and Showjumping with Australian Nations Cup Team member, Koyuna Sun Set.

Wendy has kept up with the competition in the UK, the spiritual and practical home of Eventing which has surely given her even more insight in to the modern sport. You cannot buy the experience Wendy has had and once again home, it would be a pity to waste that experience. She will always be involved with horses but the BSc. Physiotherapy and holder of a Masters Degree from the University of Queensland in Animal Physiotherapy presents options for her other than the horse world.

Horse Deals caught up with Wendy at the Adelaide International Horse Trials where she was doing expert commentary as well as pressing the flesh on behalf of the Organising Committee. We discussed the affects of that early success, her time in the UK and future plans.

“That success at Atlanta came to me very early,” says Wendy, “and perhaps at that age I did not appreciate it as much as I might have, if I had had more life and international competition experience. But certainly over the years you realise that everything does not always go to plan, I am and was very grateful to all who made it possible, as an Olympic Gold medal is probably the most public sporting accolade you can receive. Atlanta has proved a hard act to follow; I have had some fantastic horses in the intervening years, but perhaps not at the right time or considered not good enough in the dressage phase, or were injured, which meant that further representation at the highest level, WEG or Olympic Games hasn’t happened. 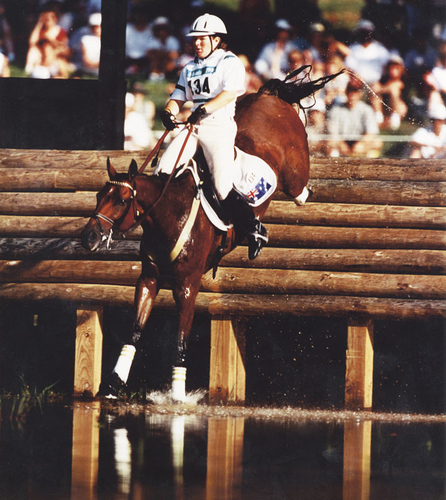 Sunburst into water at the Atlanta Olympics 1996.

“I had a mare, Koyuna Sun Set that retired from eventing, but proved to be an elite level showjumper for ten years. Sun Set jumped in three Australian Nations Cup teams in Europe and qualified for London, but, unfortunately injury intervened. At that time I went through a period where I was not sure whether I wanted to concentrate on jumping or eventing, as I was having a run at both. I was on the shadow team in both sports for London, but it did not pan out with either horse.

“I met my now husband, Nigel at an old school girlfriend’s party to celebrate the Queen’s Diamond Jubilee Thames Pageant just before Luhmuhlen (CCI4 star) in June 2012, my main selection trial for the London Olympics. If we wanted to be together, I had to commit to living in London. I did not have to think too hard about it, as I also had two horses in the UK and I was able to do some good events with them. Dancer finished 12th at Badminton that year and was the only horse to jump a double clear (cross country/showjumping) and Sun Set jumped clear in the Hickstead Derby up to the infamous Derby bank where she leapt off rather than sliding down, which was her undoing. But I just didn’t have the right horse for the right sport at the right time that was sound. Also not being at home with a larger pool of horses and a strong support base made it somewhat difficult and the two horses I had there were in their teens after London.”
Wendy is sophisticated and experienced and still very capable of taking the sport of eventing on at the highest level. 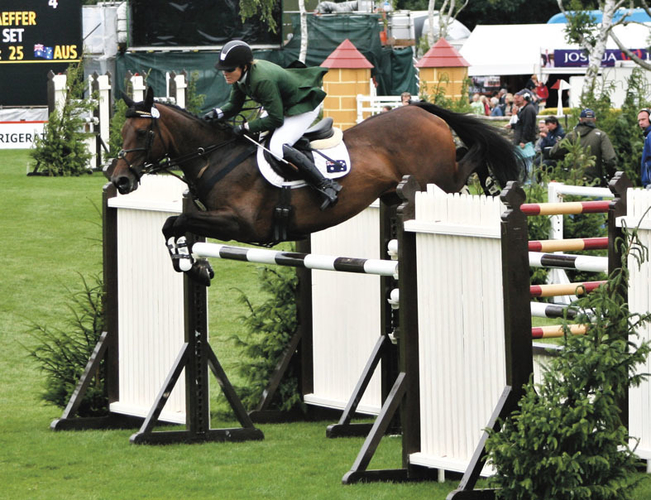 Koyuna Sun Set over the massive fences at the Hickstead Derby in 2011. She competed there again in 2014 when she qualified for the major Hickstead Derby event, going clear until she leapt off the top of the bank far too early.

“In my mind I was always going to come home to Australia, it was just a matter of Nigel fulfilling his business commitments and organising his career in another country. I just didn’t want to live long term in the UK. We were planing to move next April, but I said, let’s do it now, why go through another UK winter? I started a Physiotherapy degree just after Atlanta and it was one of those degrees that took a long time coming. I completed a Masters in Animal Physio in 2005/2006, so I have those as options and I am thinking of going back and doing some Physio just to have some lifestyle balance that with full on horses is difficult to achieve. I really haven’t mastered the art of making money and it is very difficult full time with horses.

“Of the two horses I had in the UK of recent times, one I sold and the other, Gitta Bella arrived out of quarantine in December. I was always known as a cross country and jumping rider, but in the UK I had a fantastic New Zealand Grand Prix rider and trainer Lisa White and my dressage has certainly become stronger, with a new international personal best of 78% and of course it is all about the horse you’re sitting on too. I really haven’t been riding enough horses at the highest level recently, but now back in Australia I will look at what can be done about that.

“Other aspects of equestrian sport interest me. I have enjoyed commentating here at Adelaide and I am interested in the management side of the sport. I have been involved in equestrian sport all my life and there comes a time to giving thought to giving back to the sport and I don’t want to leave it too late with that. Gill (the late Gill Rolton) set such a good example as elite rider, coach, horse producer, administrator and FEI Judge at the highest level and I am interested in following her example, except I am more interested in the technical side of the sport rather than judging.

“I felt pressure after Atlanta to capitalise on my success; to find other horses and continue winning. (Wendy won the Adelaide CCI4 star in 2002 with Koyuna Sun Glo and in 2010 with Koyuna Sun Dancer). But if you look at all the top riders, they experience career peaks and troughs, I am just grateful for what I have done.”

Wendy, the best may be yet to come?
“You just don’t know do you?”