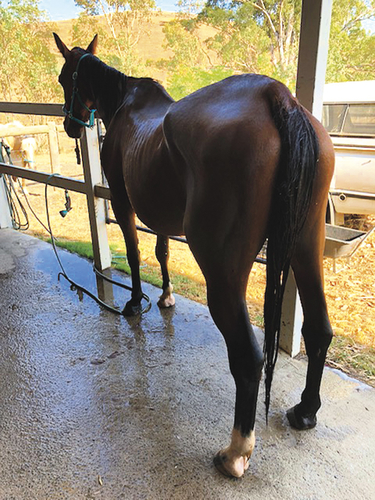 Tell us about Pretty Girl Blaze. A pretty little Standardbred trotter, approximately 14.2hh. She is bright bay with two white socks and a blaze. Her paddock name is Twiggy as she was so terribly thin when I got her. She had trialled four times as a trotter but was too slow and was retired. She never ended up racing or having a foal. Pretty by name, pretty by nature.

How and when did she come into your life? I suppose I was ready to save a soul. I wasn’t after anything flash coloured or bred, just a horse that really would need help. At the start of February 2019, I saw the photo of a sweet little Standardbred at the sales that had no history at all, other than tracing her freeze brand, to see she was 13 years old. She was so terribly skinny I was surprised she was standing up. My heart melted and I placed a phone bid for just over $200, and so they say the rest is history.

A wonderful friend Christine Allingham drove with me to pick her up. Twiggy ran up the tailgate and proceeded to munch her way through a bucket of feed.

What potential did you see in her? I’m not really sure what I saw in her. She had the most beautiful sad eyes, a long neck, good shoulder, great bone in her hindquarters, good straight legs, so all the framework was there; just a really good bag of bones. I guess being an old horse judge, sometimes you just see something that has so much potential and she needed so much help. I thought I wouldn’t be breaking in or breeding any more youngsters at my age, I didn’t count on one 13-year-old mare. Her temperament is lovely so I thought why not train her to saddle and see how she goes. 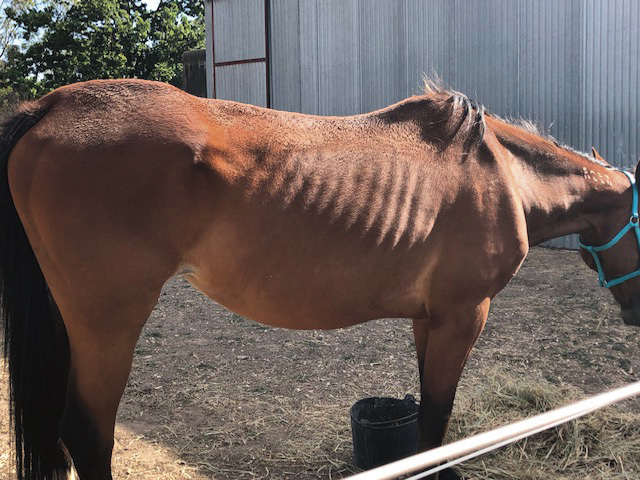 What was her condition, temperament and training like on arrival? Being so thin when I got her, the first few months were just about getting her healthy, she had lots of good food. The vet and dentist came and checked over she had a body score of one. Her early training was good. She led, tied up, floated and stood still to be handled.

When she had put on a ton of weight, I taught her to lunge and carry a saddle and long rein. She picked it up quickly. She’s such a clever girl that tries her heart out. The long reining she would have done before for harness, but the other things not so much.

When was she broken to saddle and how did she handle the process? I sent her off to Nicholas Spink for saddle training. Nick did such a great job, she was only there for four weeks and I brought her home. Nick said she was an easy horse and wished more were like her. She has only been under saddle six months now and I am thrilled with how she is going.

What was your first ride like? I thought I was riding a Mixmaster; legs were going everywhere, but she improved every day.

What was her first outing and how did she cope? Her first outing was an hour’s drive to an indoor school, something she hadn’t seen, for a lesson. She yarded next to other horses, took the indoor in her stride and I received lots of lovely comments about how chilled out she was. I was thrilled with her attitude. 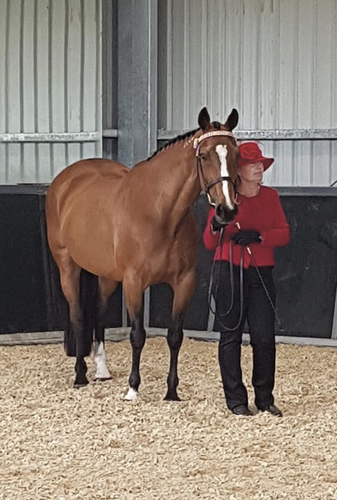 Twiggy and Janine at their first show in October 2019

What were the challenges? There haven’t been many challenges at all. A few really small ones are that she likes the security of the manège, and after her start in life wearing winkers she is a bit looky when out in open areas, but she’s getting better all the time. The bigger challenge is getting her to canter. After years of being told not to canter she doesn’t even do it in the paddock. So I have spent a lot of time teaching her how to canter on the lunge. And I used to think all horse could canter! She was a scream to watch the first few times; trot in front canter behind, legs flailing everywhere.

How would you best describe her personality? She has a great personality and greets me with a whicker when she sees me walk from the house. She eats like a steam shovel — that’s her secret to putting on so much weight so quickly — probably also the reason she calls out to me (cupboard love). She would probably sell her soul for sugar cubes. She tries so hard to please it is so incredibly endearing. Ask her something and she will try her hardest and that’s all anyone can ask.

What are your greatest achievements to date? Well, being an older horse I didn’t really have any high expectations of her, but she has handled everything thrown at her so far. I took her to a show that was held indoors and there were huge classes in a small ring. She handled all the horse moving about, and although I opted to only do the led I was thrilled she placed in all classes and won best presented six months after I bought her. Which I feel was a great achievement considering her condition when I got her. She has been out again for training in some appalling weather and handled it well. Twiggy was so well behaved and the instructor loved her.

What is she up to today? At the moment she is back in work after a short break over Christmas and my instructor says she is ready to go out and compete. We still haven’t got the canter sorted, but it is getting better a few strides here and there under saddle. She may never get it but I don’t care. I love her dearly and I know it’s a big ask for her.

What advice would you give to someone who is looking at taking on a Standardbred or older horse? I’ve trained many horses before to saddle and I am always surprised at how well they all take what is thrown at them. People always say that older horses are set in their ways, perhaps some are, but I have found Pretty Girl Blaze to be keen to learn, easy to train and even with all the work she still calls out to me and greets me at the gate for her sugar cubes. If you want a challenge and have the time to put in the work then try an older horse. If they haven’t been saddle trained before they have no bad habits.
Standardbreds have lovely temperaments and great dispositions. It’s scarce to find these diamonds, but they are out there!

What are your goals with her going forward? I didn’t have any goals to begin with, perhaps a ride around the paddock, but now I would love to get her out to a few shows once we have that canter established.

Would you do it all again? I’m not getting any younger, but yes I would do it again. It’s a great satisfaction seeing the transformation before your eyes. 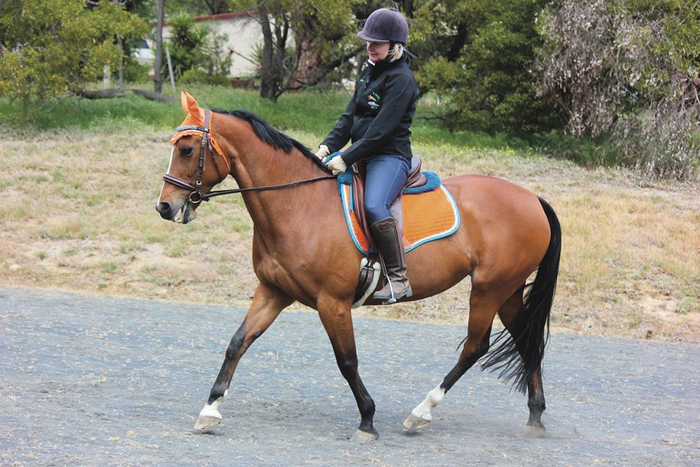