Pret a Tout more than lived up to his name when carrying German ace, Marcus Ehning, to victory in today’s Longines FEI Jumping World Cup™ 2019/2020 Western European League qualifier at Madrid in Spain. 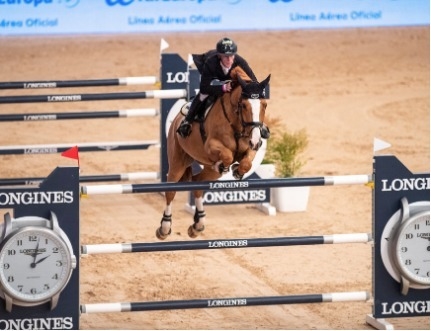 Fourth to go in a breathtaking nine-horse jump-off, the pair took the lead with a spectacular run that stopped the clock in 43.30 seconds and couldn’t be caught. Ehning’s compatriot and 2011 series champion. Christian Ahlmann. came a close second with his exciting nine-year-old stallion Dominator 2000 Z, while Belgium’s Pieter Devos and Espoir finished third. The crowd packed into the IFEMA Arena in the Spanish capital city were treated to a fabulous afternoon of sport.

Course designer, Javier Trenor, set the stage with a 12-fence first-round track in which almost every fence was on a related distance. Absolute accuracy was required to successfully navigate the roll-backs, dog-legs and tight turns in the small arena, and the 66 seconds time-allowed also played its part. But when it came to the jump-off then it was speed and courage that would count, with two exceptionally long runs in the closing stages. And Ehning was at his very best - so fast that he could take a check before the last and still set an unbeatable target.

He wasn’t quite so convinced himself however. “I thought maybe I had left a small gap, but as it turned out I didn’t!” he said afterwards.

Italy’s Emilio Bicocchi and Evita SG Z produced the first jump-off clear in 44.93 and then Devos and his big-striding gelding Espoir raised the bar with a flyer at the last to break the beam in 43.66. But Ehning and Pret a Tout shaved almost a quarter of a second off that when galloping through the finish in 43.30.

He then had to sit back and watch the five that followed him, only Ahlmann and his lovely nine-year-old Dominator seriously threatening when scorching home in 43.53. A little wobble on the gallop to the final oxer may have made all the difference - “I had a chance to win today but my last line was not the best!” admitted the man who lifted the coveted series trophy back in 2011. But he was still thrilled with runner-up spot on a stallion that is only nine years old and showing such immense promise.

Ehning was delighted with Ruth Krech’s 16-year-old gelding who clearly still loves his job. He’s an extraordinary horse because he shows the same enthusiasm and ability in a massive arena like Aachen (GER) where he won the Grand Prix in 2018 as he does in a much smaller arena like today’s venue in Madrid.

“He’s a very fast and experienced horse, and I also have a bit of experience!” said the double Olympian and three-time FEI Jumping World Cup™ champion who is one of the most admired horsemen in the sport.

He admires the clever and confident Pret a Tout because “he has his own style and it’s not classical but his mind is really, really good and he’s very flexible and that helps him a lot. He’s a real personality - he’s quite lazy, but he knows he’s a very good horse so he always feels very proud of himself!”, said the German star who is now targeting the WEL qualifier at Olympia in London (GBR) later this month.

Before that however there is one more visit to Spain, for the seventh qualifier that takes place at La Coruna. Pieter Devos will be holding court at the head of the Western European League when that gets underway on 15 December, and although today he didn’t repeat the win he posted at the previous leg in Stuttgart two weeks ago, he is feeling very pleased about his consistent results that have earned 55 valuable points and a definite place at the Longines FEI Jumping World Cup™ 2020 Final next April.

“It is only halfway of the season and I’m very happy to know I’ll be going to Las Vegas! I’ve never ridden there and I’m excited to go!”, Devos said.

Watch the highlights below: