The KWPN stallion Jovian claimed the 5-Year-Old title, the Oldenburg stallion Zucchero topped the 6-year-Old division and the Hannoverian stallion d’Avie returned from his 2018 triumph to star once again as a 7-Year-Old at the Longines FEI WBFSH Dressage World Breeding Championships for Young Horses in Ermelo (NED) at the weekend. This was the fourth time for the event to be held at the Dutch venue, and next year it will return to Verden in Germany where it was previously staged over a period of 15 years. 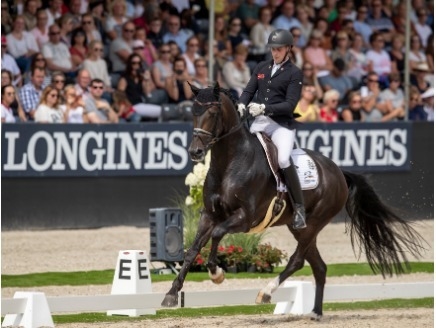 It has become a superb testing ground for future champions as horses compete against their peers born in the same year, firstly in a qualifier from which the top 12 qualify directly for the Final while the rest go into a small final from which the top three also make the cut.

5-Year-Olds: An historic number of 10s

Denmark’s Andreas Helgstrand had a glorious weekend when taking gold and bronze in this division. In Saturday’s finale he first competed Queenparks Wendy, a mare by three-time World Breeding Chamionship winner Sezuan, and in a solid test she showed lovely relaxed walk and a canter so uphill it earned a 10 and the temporary lead in the class on a total of 9.42 points.

The sensational breeding stallion Secret, another son of Sezuan, won the qualifier for Sweden’s Jessica Lynn Thomas and was a big audience favourite. But they had to settle for silver when Helgstrand returned to squeeze past them and post the winning score of 9.66 with Jovian. “The trot had so much spring, so much suspension, front and hind matching well”, said judge Maria Schwennesen from Australia.

“We had such a strong group of 5-Year-Olds from our stable that it was hard to say which would do best!” said Helgstrand. “I am very happy for my two horses doing clean tests. Jovian has been the easiest horse to ride from the first day he entered our stables. I also want to compliment the jury, and especially their explanatory statement to the audience: critical yet positive, it was perfect!” he pointed out.

6-Year-Olds: A final with sugar-coating as Zucchero comes out on top

The test for the 6-Year-Old final demands a heightened degree of difficulty, so it sifts out the real potential stars who may well be the Grand Prix horses at the Olympic Games in 2024.

Germany’s Helen Langehanenberg and the Danish Warmblood, Straighthorse Ascenzione, kicked off yesterday morning with a score of 8.94 before The Netherlands’ Bart Veeze and the KWPN stallion Imposantos nearly scored a 10 for walk to total on 9.8. The first to challenge his lead was Helgstrand, this time partnering Zhaplin Langholt which is owned by American Grand Prix rider Charlotte Jorst. The pair were clapped down their final centreline before their mark of 9.34 went up on the leaderboard. And then the Danish rider returned to go even better with his 5-Year-Old champion from last year, Revolution. The arena was hushed as this pair showed superb rhythm and a breath-taking, ground-covering uphill canter, and the trot was rewarded with a 10 for a total final score of 9.44.

However the spectators showed who their favourite was when they cheered Germany’s Frederic Wandres and Zucchero OLD all the way from their final corner to their final halt. “This horse excelled in the flying changes and lateral work, he was the closest to perfection! His future as a dressage horse is bright!” commented the judges after they posted the winning mark of 9.66.

“I have competed here every year, come close twice with fourth place so this is very special!” said Wandres afterwards. “It is a very difficult test, almost a small St Georg and and I knew I had to have the horse really supple and that we must trust each other. I have a strong relationship with Zucchero” added the newly-crowned champion.

7-Year-Olds: D’Avie is champion once again

The 7-Year-Olds have to deliver a combination of excellent gaits and precision, with technical scores awarded by two judges along with the conventional five-score assessment of Trot, Walk, Canter, Submission and future Perspective.

If any horse has a stellar pedigree it is Total Hope OLD, a son of Isabell Werth’s super-mare Weihegold OLD and world champion Totilas. An approved stallion ridden by Norway’s Isabel Freese who has been working for Paul Schockemohle in Germany for many years, the black stallion went into the lead on a score of 84.250.

However the pair were overtaken by Denmark’s Jan Moller Christensen and Hesselhoj Donkey Boy who previously took a bronze as a five-year-old. Rewarded a 10 for a huge walk and another for potential, they went out in front when posting 85.02. But last year’s 6-Year-Old champion D’Avie presented a performance that made the audience burst into applause well before the end, and this son of Don Juan de Hus snatched the gold by a whisker when putting 85.107 on the board.

“Of course I felt pressure defending the title, especially when the competition comes so close!” said rider Severo Jurado Lopez, a man who has made something of a habit of great results at these championships down the years. “My dream is to continue with the education of D’Avie and to keep riding him to the highest level, like I do with Fiontini” explained the Spanish star, referring to the mare with which he won at each level in these Championships and who now looks set for stardom on the big stage.