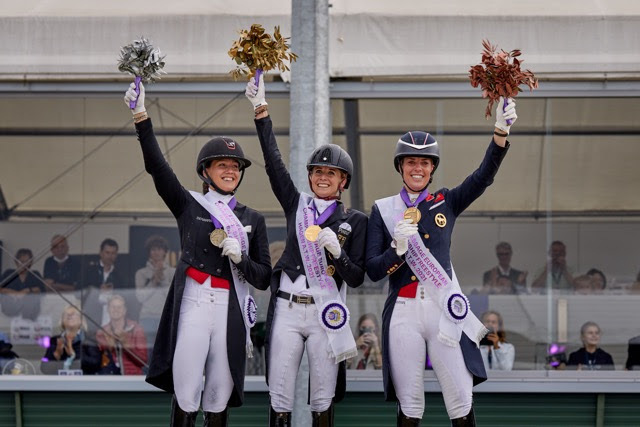 Germany’s Jessica von Bredow-Werndl was filled with emotion after clinching her third gold medal of the week when topping the Freestyle at the FEI Dressage European Championship 2021 in Hagen (GER) this afternoon.

“It’s like a fairytale, the ride today was the best I ever felt!”, said the 35-year-old athlete who also swept all before her at the Tokyo 2020 Olympic Games this summer. “It may not have been the highest points ever, but for me it was the best feeling I ever had with Dalera. I was very emotional after finishing. No matter what points or what place I got I was so happy!”, she added.

Scoring 91.021 when third-last to go, she finished almost three percentage points ahead of Denmark’s Cathrine Dufour who took silver with Bohemian, and it was Great Britain’s Charlotte Dujardin and Gio who grabbed the bronze.

Going fifth from last, Dujardin put 87.246 on the board, and she might have expected that would not be enough for a podium placing with the final German partnership of Isabell Werth and Weihegold OLD still to come. But, second-last into the arena, Werth's multiple medal-winning mare was clearly lacking energy and power, and their score of 84.896 left them in fourth place.

Dujardin was hugely pleased with her result. At only 10 years of age Gio is still very much on a learning curve, with little exposure to top sport other than his sensational results at the Tokyo 2020 Olympic Games where he won double-bronze. Today’s performance was even more impressive.

“I’m so proud of him, it’s only his second time through that music and as you could see the degree of difficulty is immense. The Olympics was the first time I rode it and it was mistake-free there, unfortunately I made a mistake in the ones on the centre line today, rider error not horse error, and I thought that would have cost me a medal. It’s still frustrating that I made that mistake and I’m so cross with myself because he tried so hard - but obviously we have medalled!”, said the 35-year-old athlete.

She really pulled out all the stops today, including taking all the risk in extended canter. “All week I hadn’t pushed him full out because he is a young horse and I want him for the future and he did the Olympics. He tried for me every day here, he did a great Special (on Thursday where the pair finished fourth), I was so proud of him, and we just missed out on a medal. So I thought today - I’ll just put that extra bit in”, she said.

Competitiveness is in Dujardin’s DNA. “I went in there wanting a medal for sure, I wasn’t going down without a fight! And being the first of the last five combinations you know you have to give it a good go, set the standard. I felt we did that, even with a mistake. We got 87 percent with those mistakes, without those mistakes who knows what it might have been - I asked him to step up and he sure did!”, she added.

And having finished his test, the little horse, whose rider calls him Pumpkin, was completely relaxed as he left the ring.

“That’s the thing with him, he just gets more and more confident and that’s his first time in an arena with that atmosphere, he’s not used to crowds. He’s just brilliant, he switches on and does his job, and then he switches off and off he goes home!”, she pointed out.

Dufour was equally pleased with Bohemian whose test was a joy to watch, filled with energy and power.

‘I’m really happy, first because I had a super ride - almost flawless - we had a tiny mistake in the ones at the end and that was totally my mistake. We have grown a lot since Wednesday this week and today he felt so happy, so ready to deliver. It was just so super-easy going. I was back to no pushing, no forcing, just enjoying and dancing with him!”, said the dynamic 29-year-old Dane.

Her emotional music from Les Miserables added a poignancy to her performance. “It expresses something about where I am in my life. It delivers a kind of message - that I’m really enjoying life and I’m in a good place now and that my horse and I have found our path together. I feel really comfortable with what I’m doing with my team, with the people I have around me, I have a super family, an extra family and it feels fantastic!”, she pointed out.

But the new European Freestyle gold medallist was happiest of all.

Talking about Dalera’s magical Freestyle performance, von Bredow-Werndl said “she was 100 percent focused, she was light, she was on fire but not too much. Two days ago (in the Grand Prix Special) she was a bit too hot so I couldn’t ride for example the extensions fully, and then it looked a little bit tense sometimes, but today it was a perfect, perfect kind of energy".

"She loves what she does, and I feel it in every second and every movement. Even my collected walk felt super today. The feeling was the best I’ve ever had so far, in my whole life, on any horse!"
Jessica von Bredow-Werndl (GER)

"That’s why I was pretty emotional when I finished because this is not normal - that a horse improves during a competition. Today she had no wet hair (sweat), either in the warm-up or after the competition and that’s crazy!”, she said.

The spectators at Hagen certainly added to the great atmosphere today and the new European triple champion, who also has two Olympic gold medals in her trophy cabinet after this extraordinary summer, commented on the difference it makes to have them there.

“It’s so great to ride in front of an audience again, it feels completely different, we were carried by them I think, and they were so supportive of all the riders during the week. I hope it will stay like this, it’s so good to have this back!”

Von Bredow-Werndl has led Germany to a glorious summer of gold, and now has next year’s FEI World Equestrian Games in her sights. However Dufour gave her fair warning that she and her Danish compatriots will be ready and waiting when the action begins on their home ground in front of their home crowd in Herning next August.

She intends narrowing the gap between herself and the German star over the next 11 months.

“Right now we can only aim at Jessica’s marks, and congratulations to her on a great season this year. It’s exciting with the WEG next year in Denmark, I’m sure the Danish audience will put pressure on the Germans!”

For now however, the Hagen hosts can continue to bask in a golden glow….