British take a firm hold on first day of Dressage 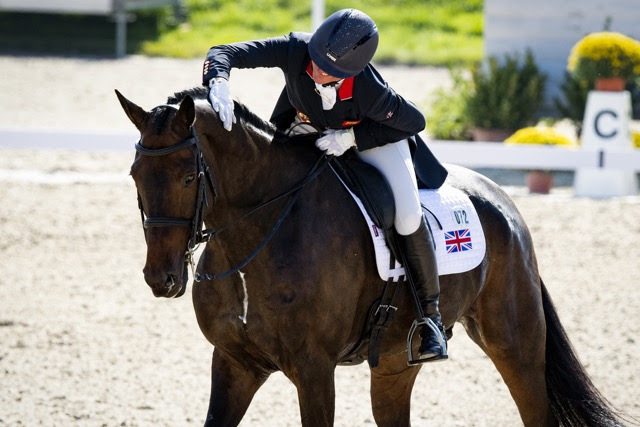 Nicola Wilson and JL Dublin posted the leading score of the day to put Team Great Britain out in front after the first day of Dressage at the FEI Eventing European Championships 2021 in Avenches, Switzerland today. (FEI/Richard Juilliart)

Great Britain established a significant lead on the opening day of Dressage at the FEI Eventing European Championships 2021 in Avenches, Switzerland today when the first two of their four team members produced superb tests to take the two leading spots.

At this halfway stage of the Dressage phase they head the team leaderboard with a running score of 44.20, stalked by France with 56.00 and the defending champions from Germany close behind on 57.10. Italy, The Netherlands, Austria, Belgium and Ireland fill the next five places, followed by Russia, Sweden, Spain and Switzerland. Only one member of the three-man team from the Czech Republic competed, so for the moment they lie last of the 13 competing nations.

The British already look formidable. Piggy March threw down a super score of 23.3 with Brookfield Inocent to take the lead when last to go of the first group of riders this morning. And then, seventh-last of today’s 34-strong contingent into the ring, Nicola Wilson pushed her compatriot off pole position with a beautiful performance from JL Dublin that earned 20.9.

The British are chasing European team gold for the 23rd time in the 68-year history of these Championships, and by the end of the week could hold the Olympic, World and European titles. However there is still a long way to go before the medals are handed out next Sunday afternoon, and the defending European champions from Germany certainly won’t just sit back and let it happen. The competition is already building into an almighty battle.

“It was a great test, he was as good as he could be and a swear word never entered my mind and that’s always a really good sign!”, laughed March when she rocketed to the top of the leaderboard.

“The consistency of his work and his mind all the way through - I could give him another 10 goes and I don’t think he could do better, he gave me his all, and that’s all you can ask for. I’m over the moon, what a good boy!”, said the 41-year-old athlete who was on the silver medal winning team at the last European Championships in Luhmuehlen, Germany in 2019 and Britain’s gold medal winning side at the FEI World Equestrian Games in Tryon, USA a year earlier.

Wilson’s smile was even bigger when she saw her result. “I’m so so delighted, he’s a fab horse and he’s really come of age this year”, she said of her handsome 10-year-old gelding.

"He’s still young and relatively inexperienced. I had a neck injury (in June 2019) so he missed half a year and then Covid happened. So even though he’s not been on the competition field he was still trained and got more established in his mind. But we’re only in phase one and there’s an awful lot more to go…."

she pointed out wisely.

All the riders today were keen to talk about Mike Etherington-Smith’s cross-country course which is set to challenge the very best on Saturday.

“It’s demanding all the way and it gets very intense towards the end as well with twists and turns. The questions come thick and fast right to the last fence which still isn’t an easy fence - it’s a big old table. There’s a great deal to jump out there but I look forward to the challenge and hope that both of us are up to it!”, Wilson said.

German veteran, Andreas Dibowski, is lying third individually with his 2019 European team medal-winning partner FRH Corrida who was reserve at the Tokyo 2020 Olympic Games this summer. “After Tokyo she was so fit and motivated, in training she had a good feeling and here after arrival also. I expected a good result today, I was hopeful for under 30, and I was really happy the judges saw what I felt”, he said after putting 25.6 on the board.

Fourth place is also in German hands this evening after individual competitor Christoph Wahler posted 26.0 with Carjatan S. But the 27-year-old rider doesn’t think the cross-country track will suit his 12-year-old gelding. “It won’t ride soft and easy with so many turns and changes of direction, so it wouldn’t ideally suit a very big horse like mine”, he pointed out.

Dibowski’s team-mate Anna Siemer thinks the opposite however. She slotted into 17th place with FRH Butts Avondale today and is rearing to go on Saturday. She says she and her 14-year-old mare jumped clear cross-country for over two years and that contributed to their selection for this crack German side. “She’s a fast horse and good in this long format, she’s a thoroughbred so that is an advantage”, Siemer explained.

And she’s thrilled to have been selected. “It’s unbelievable to be in a team with your super-heroes. My horse and I are a small team - but to be in a big team is really cool. And they all watched my dressage!”, she said, overwhelmed by the enormity of the moment.

But it is France who currently sit in silver medal spot after both Jen Lou Bigot with Utrillo du Halage and Gwendolen Fer and Romantic Love finished today in the top nine, Fer’s 26.5 leaving her in overnight sixth place and setting it up nicely for compatriots Stanislaus de Zuchowicz (Covadys de Triaval) and Maxime Livio (Api du Libaire) when the action resumes tomorrow. “I was particularly delighted with how my horse went - he was wonderful today!”, Fer said.

The last tranche of riders tomorrow afternoon will be a fascinating bunch, because Livio will be immediately followed by Germany’s Ingrid Klimke who can be expected to seriously challenge for the lead with SAP Hale Bob OLD while Britain’s Ros Canter and Allstar B are the penultimate partnership into the ring. Only then will the stage be set for Saturday’s cross-country phase which, by all accounts, is going to be hugely influential.

Great Britain’s Piggy March said today, “I’m going to have to walk the course a lot of times because there’s great potential for getting lost. It’s very technical and the single fences are big enough as well, a lot of twists and turns so we are going to have to be on our A-game, but it’s a proper Championship track for sure. This is not going to be a dressage competition!”, she added.

Up to the plate

If that’s how it plays out there are plenty ready to step up to the plate, and amongst the ones to watch may be Italy’s Evelina Bertoli and her 15-year-old gelding Seashore Spring who lie tenth this evening. The 35-year-old rider from Rome competed at the FEI World Equestrian Games 2014 in Caen, France. “I was there just to be there back then, but here I’m with the team to do my best”, she said with conviction today after helping boost Italy to fourth place.

It’s hardly surprising she’s feeling gung-ho, because her horse has some pedigree. “He is great cross-country and his father won the Pardubice so I’m very confident in him!”, she said, referring to the formidable steeplechase course jumped annually in the Czech Republic. She should have an enjoyable day on Saturday in that case.

Meanwhile however there’s more Dressage to be done tomorrow, and first into the arena at 10.00 local time will be German individual Dirk Schrade with Casino 80.