FEI Jumping World Cup™ winners celebrated all across the globe

Across six continents, horses and riders have been competing in 15 leagues throughout the FEI Jumping World Cup™ 2019/2020 season. Many of the qualifying series are now completed, with only Western Europe, North America and Central Europe yet to be decided. For some of the top finishers their result will carve a path to the Longines 2020 Final in Las Vegas, USA in April. For others, victory in their own region has been their ultimate goal. 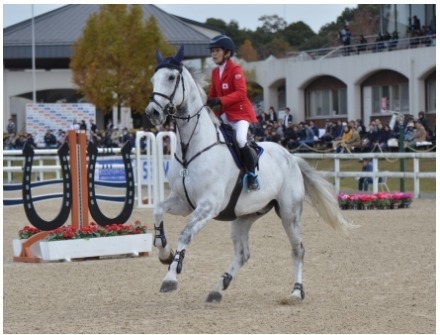 Athletes from Uzbekistan dominated the Central Asian League where Gairat Nazarov, who took double-bronze at the 2019 Eurasian Championships in Moscow (RUS), edged compatriot Bekzod Kurbanov at the end of the three-leg series that visited Tashkent (UZB), Almaty (KAZ) and Bishkek (KGZ). There were also three legs in the Longines China League in which athletes from China, Taipei and Hong Kong lined out. The events were staged in Tianjin, Beijing and Chengdu and China’s Jirigala Eerdeng and Tongyan Liu claimed the top two places.

A total of 20 athletes contested the Japan League, and Masami Kawaguchi came out on top ahead of Jun Takada. Third place here went to Eiji Serizawa who collected points at every one of the seven legs of the series.

It was a second consecutive series win for Tegan Fitzsimon in the New Zealand League which concluded last month. The 29-year-old rider won two of the five legs along the way, but it was a close-run affair when she finished just two points ahead of runner-up Brooke Edgecombe who pipped her for pole position at the last leg in Dannevirke.

Chris Chugg, Jamie Kermond and Billy Raymont filled the top three places on the Australian League leaderboard. Chugg won the legs at Tamworth and Sydney, but had to settle for third place at the last round in Boneo where Kermond reigned supreme. However having accumulated 100 points Chugg took the title, and the man who has introduced many super-talented horses to the top end of the sport is planning to bring his winning ride, PSS Levilensky, to Las Vegas.

In South Africa a total of 41 athletes competed in the five-leg league won by Christophe van der Merwe. The 26-year-old topped the opener at Midrand, the third leg in Shongweni and the final in Kromdraai, collecting 75 points which left him well clear of his nearest rival Govett Triggol.

London Olympian, Jose Roberto Reynoso Fernandez Filho, won the South American South League ahead of fellow-Brazilians Flavio Grillo Araujo in second and Karina Harbich Johannpeter in third. There were six events in this series, visiting Sao Paulo, Curitiba and Rio de Janeiro in Brazil and Sol de Mayo and Buenos Aires in Argentina. A double of wins, and third place at the leg in Rio, sealed the league title for the rider who took team silver at the South American Games in Quillotta, Chile in 2014.

The Arab League is sub-divided, and Saudi Arabia’s Abdullah Alsharbatly, individual silver medallist at the FEI World Equestrian Games™ 2010 in Kentucky (USA), pipped the UAE’s Abdullah Humaid Al Muhairi for top spot in the Middle East Sub-League. The North African Sub-League was dominated by Egyptian riders and Abdel Said, who finished 10th at the 2019 Longines FEI Jumping World Cup™ Final in Gothenburg (SWE) with Jumpy van de Hermitage, was clear winner here when finishing with 63 points ahead of compatriots Mouda Zeyada and Karim Elzoghby who slotted into second and third with 38 points each.

The latest FEI Jumping World Cup™ series to conclude was the Caucasus-Caspian League which drew to a close in Tehran (IRI) last week where Ali Aziznia emerged as league champion by a narrow margin of just one point over fellow-Iranian Radmard Housmand.

The Longines FEI Jumping World Cup™ North American League is also sub-divided and America’s Karl Cook is leading the Western Sub-League while, with one leg still left to run at Ocala in Florida (USA) in early March, it is double series champion Beezie Madden who heads the leaderboard in the Eastern Sub-League.

The last leg of the Western European League takes place in Gothenburg (SWE) this weekend while the Central European League results will be decided at the League Final in Warsaw (POL) in March.