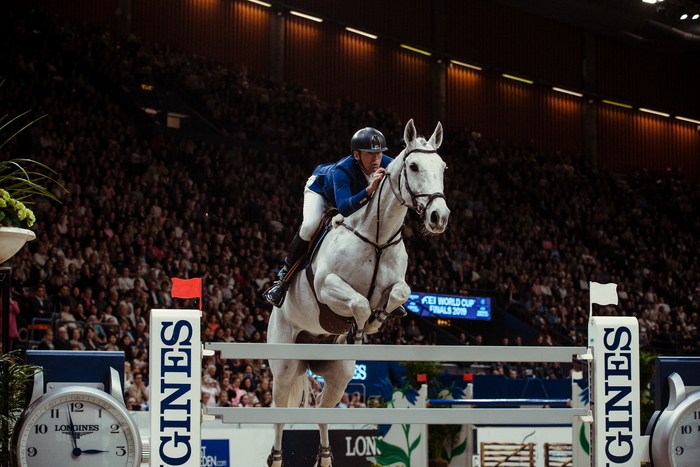 Five time Olympian Peder Fredricson (SWE) has secured the number one spot of the Longines World Ranking for the first time in his career, taking the reins from Olympic bronze medallist, Daniel Deusser (GER) who took over the position for the third time back in June 2021 and now sits in second position.

Fredricson (49), who shot up the rankings last month from number 17 into second position, one that he has held frequently, is now at the top of this elite list on 3015 points, earning further recognition for his consistent performances this year, with one breathtaking ride after another.

”Finally! I can almost not believe it’s true. I’ve been close so many times before. Right now it feels incredibly good”, said Peder Fredricson.

”To be number one on the world ranking is a goal I set a couple of years ago. It has at times felt like climbing the highest mountain in the world and I’ve almost reached the summit several times, but always fallen down. It feels amazing to finally reach the top and to be able to put down the flag.

”I dedicate this to my whole team. To be number one is something we’ve been working for during such a long time. It’s also very special that this success is made up of so many competitions with different horses during a whole year. To reach number one takes more than just good horses, you have to have good horse owners, good grooms and a very dedicated and hard working team on the ground. In that way I rank this much higher than winning just one big class during one weekend. I’m very grateful to my team and we will celebrate this together”.

His trophy cabinet includes four Olympic medals, including team silver from the 2004 Athens Olympics, individual silver from the Rio 2016 Games, where he was the only athlete who was clear in all the six rounds. Along with winning the individual silver at the Tokyo 2020 Olympic Games in August this year, his outstanding performances helped Sweden to its first Team Jumping Olympic gold medal in almost 100 years, and marked 29 years after he made his Olympic debut at the age of 20 at the 1992 Barcelona Olympic Games. Back then, he was an accomplished Eventer – and the youngest-ever Olympic equestrian athlete for Sweden.

With his loyal partner H&M All In, Fredricson was crowned the 2017 European Champion on home soil in Gothenburg (SWE), and took a silver medal with the team. He was a member of the Swedish squad that took team silver at the FEI World Equestrian Games™ in Tryon 2018 (USA), and in 2019 at the FEI World Cup™ Final Gothenburg (SWE) he took bronze in front of his home crowd. More recently, he won the individual bronze at the Longines FEI Jumping European Championships in Riesenbeck (GER).

In 2016 and 2017, he received the Athlete of the Year award at the Swedish Sports Gala. The 'Jerring Prize', which is Sweden’s most prestigious sporting prize, is awarded for a successful sports achievement. He earned this honour by a popular vote which put him above the likes of Swedish football star Zlatan Ibrahimovic, golfing sensation Henrik Stenson and rallycross champion Mattias Ekström. In February 2019, he was presented with the Medal of Honour from Sweden's King Carl XVI Gustaf. This month, Fredricson was one of four athletes nominated for the Peden Bloodstock FEI Best Athlete Award which will be announced in November.

Born into an equestrian family, Peder started riding at the age of 5. His father Ingvar is a veterinarian as well as the former boss at Flyinge, the largest breeding station in Sweden. His brother Jens, also part of Sweden’s equestrian elite, competed at the London 2012 Olympics, as well as two FEI Jumping World Cup™ Finals and FEI European Championships in 1997 and 2013. His wife Lisen, also a Jumping athlete, rode at the Olympic Games in Sydney in 2000 and London in 2012.

The latest rankings reflect some strong performances with Martin Fuchs (SUI), Scott Brash (GBR) and Marlon Modolo Zanotelli (BRA) remaining in third, fourth and fifth positions respectively. A shuffle in the remainder of the top ten sees Steve Guerdat (SUI) take a leap from tenth to sixth spot on 2450 points, whilst Ben Maher (GBR) has dropped down to seventh with 2417 points. Sweden’s Henrik von Eckermann has dropped by one spot to eighth place, and the USA’s Kent Farrington finds himself back in the top ten in ninth position, only 22 points behind the Swede. Belgian’s Jérôme Guery now sits at number ten this month.