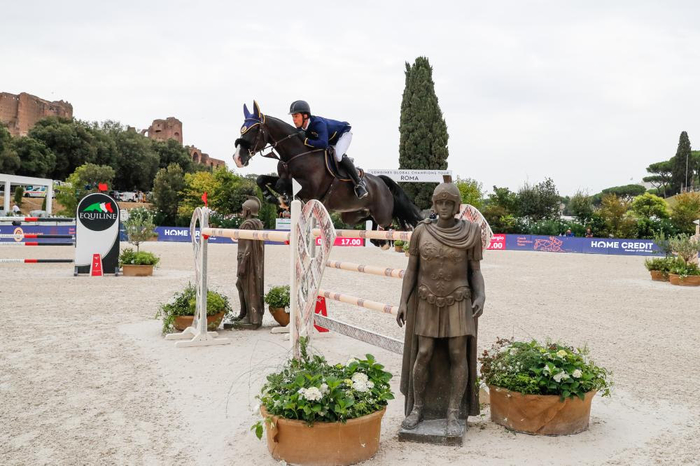 At a pivotal point in the 2021 Championship race GCL Rome could dramatically shake up the standings in Saturday’s showdown.

With only seven points between the top three teams Valkenswaard United, Shanghai Swans and Paris Panthers the 13th leg of the season kicked off with a bang for the second week running in the stunning Circus Maximus.

Coming into today’s round one all three of the top teams in the Championship have each won 3 stages and been on the podium six times this year. However, none of these teams were in the top section of the field after round one as the Prague Lions pairing of Sergio Alvarez Moya and Jur Vrieling took pole position with lightning fast clear rounds on Alamo and Flumicino van de Kalevallei.

Speaking in their leading team interview Moya said: "Jur and I decided to go for it today, so far we haven’t been very lucky with the team always being to careful so today we said let's go for it and just try to have a good time and it paid off."

Jur Vierling added: "We are proud of the horses and our team and are positive for Saturday. I always love it here in Rome so it is a lucky place for us."

It was a historical show last weekend as GCL Rome week 1 saw no team, horse or rider double clears setting this week up to be an epic battle of the best once again. Today a surprise double clear from last in the Championship Cascais Charms early on means they are the only other team to enter Saturday on a clean sheet after flawless rounds from Jodie Hall McAteer and Roger Yves Bost on board Salt’n Peppa and Bluemuch des Baleines.

Two time Championship winners London Knights have been knocked out of the race for the win and have to focus on keeping themselves inside the top four in the championship so they fast track through to the Semi-final of the GCL Super Cup meaning one less round to jump in Prague. Today it was a game changer for the London Knights as they put themselves straight out of contention when it was three down from Douglas Lindelöw on Jezebel followed by an unlucky pole and single time fault from Emily Moffitt and Barcara d’Archonfosse.

After the London Knights almost handed fourth place to the Monaco Aces on a platter it proved too much for Jeanne Sadran and Unforgettable Damvil. Clearly feeling the pressure after a unique scenario of the London Knights finishing on 17 faults the Aces missed out on their big chance. Julien Epaillard was never going to catch a time fault but he had to jump clear or he would throw a lifeline to the London Knights. Both parts of the GCL double fell and the team immediately dropped straight behind the Knights leaving it all to play for in Saturday’s Showdown.

First to go in the battle between the top three was last weeks champions Shanghai Swans. Proving their dedication to the team Malin Baryard-Johnsson brought out her top horse H&M Indiana once again. A costly fault going into the triple combination as they lacked pace coming out of the turn meant the pressure was on. It has been a while since Pius Schwizer has been on the team, this time opting to ride Karel VDB. The pair looked on track for a clear round until they rolled the last fence bringing the team total up to a dramatic 8 faults.

Championship leaders Valkenswaard United brought out their strongest team possible of Peder Fredricson on H&M All In and Edwina Tops-Alexander with Fellow Castlefield. Their direct rivals Shanghai Swans finished with 8 faults giving United some breathing room. A shock fault at fence three from the horse that doesn’t make faults H&M All In meant Peder Fredricson handed the reins over to Tops-Alexander with only one fault in hand. Edwina did exactly as she needed to keep the team ahead of the Swans and created a margin after a slow and steady clear.

The big challengers came out this weekend with an unprecedented team of Eve Jobs and Penelope Leprevost. Unfortunately the Panthers didn’t make the most of the situation where the Swans and United had both had faults. Jobs took all the inside turns but flew into the GCL cobaintion and took the front rail out of the oxer on Venue d’Fees des Hazalles. Another 8 faults from Penelope Leprevost and Verite Une Prince meant a total of 12 for the team and a lot of work to do on Saturday.

It was also an all female team for Berlin Eagles consisting of young gun Laura Klaphake with Quin and Jane Richard Philips on Fouego de la Closiere. Just one down and a single time fault brought the team total to a respectable 5 faults and in with a chance of dramatically climbing the rankings.

Last to go, New York Empire fielded an all Irish team of Denis Lynch and Shane Breen. Lynch and GC Chopin’s Bushi produced the goods once again with a fast clear round. Unfortunately Breen didn’t have any birthday luck and added 4 faults to the board but in a rapid time on Z7 Ipswitch to secure third place going into round 2.

As it stands now after GCL Rome Round 1, fourth spot in the Championship race is still up for grabs as the battle between Monaco Aces and London Knights now also brings in Berlin Eagles and the Prague Lions after today’s huge scoring scores.

After round one how it stands in the Championship:

Valkenswaard United would increase their lead on the Shanghai Swans by 5 points
The gap between Shanghai Swans in seconds and Paris Panthers in third would increase by 2 points
London Knights would remain fourth place in the Championship with 215 points while Prague Lions could jump up to 5th on 210 points.
Monaco Aces would drop right down the order to 7th with 201.5 points and the Berlin Eagles would slide up 6th place on 205 points.

Tune in to find out how GCL Rome plays out on Saturday at 11.40 local time for what is set to be a thrilling round 2.