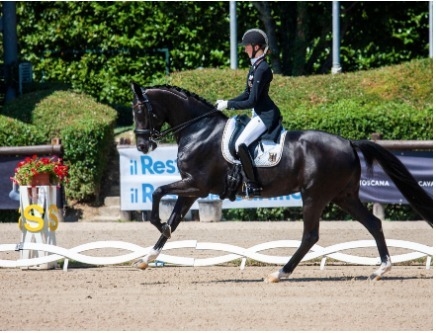 They claimed nine of the 11 gold medal placings on offer, with only a Dutch double standing in the way of a total German whitewash. High temperatures in the early part of the week were followed by rain on the final day, but nothing could get in the way of sparkling sport filled with great promise for the future in this demanding equestrian discipline.

With its six floodlit arenas, top-class stabling and extensive hospitality areas the venue, which lies on the Adriatic Sea, was something of a paradise for the record number of young athletes from 26 countries who turned up with their support teams, families and friends. As Maria Schierholter Otte, team leader of the German Junior and Young Rider squads said, “it is essential for the teams to be able to compete in all four categories in the same place so, from this point of view, San Giovanni is the ideal solution!”

It was triple-gold for Jana Schrödter and her stallion Der Erbe who, along with her German team-mate Anna Middelberg partnering Blickfang, posted the two leading scores on the opening day of the Junior team test last Wednesday. When compatriot Valentina Pistner posted the biggest mark of the entire competition with Flamboyant the following day, then the Junior Team title was in German hands. Henriette Schmidt and Rocky’s Sunshine were the fourth combination in the winning side, and such was the quality of the German performances that her strong score of 74.182 was the discard.

Awarded a massive 77.971, 18-year-old Schrödter then went on to win the Individual title ahead of The Netherlands’ Luiten in silver on a mark of 75.588 and Schrödter’s team-mate Pistner in bronze (74.794). And these three horse-and-rider combinations remained on precisely the same steps of the podium when the Freestyle medals were awarded on Sunday. It was an extraordinary series of results for the new triple champion who was originally a reserve for her team but who was called into action at the last moment to substitute for Lucie-Anouk Baumgurtel.

A total of 78 athletes and teams from 19 countries contested the Junior medals.

The Netherlands’ Daphne van Peperstraten and Greenpoint’s Cupido topped the Young Riders team scoreboard with a mark of 74.265 after the first day, but Germany’s Semmieke Rothenberger demoted her to runner-up spot when the second tranche took their turn the following day and, like her Junior squad-mate, went on to score a hat-trick of victories.

In the Young Riders Individual, Rothenberger’s impressive mark of 78.941 pinned The Netherlands’ Pap into silver and her German team-mate Welschof into bronze. It was closer in the Freestyle, with just over half a percentage point separating her from team silver medallist Donkers, and the Dutch were particularly strong here, Pap clinching the bronze just ahead of van Paperstraten.

Success is no stranger to Rothenberger whose family are steeped in Dressage history. She already had eight European gold medals in the bag by the end of her career in ponies, highlighted by brilliant partnerships with both the wonderful Golden Girl and the delightful Deinhard B. She won three more at Junior level with Geisha and Dissertation, and although she has claimed two Young Rider golds with Geisha in recent years, she pulled out Dissertation, who helped her become double Junior champion at Oliva (ESP) three years ago, to do the hat-trick this time around.

“It couldn’t have been better - I am particularly proud of these results obtained against very strong opponents. And I really like the system here, this is a perfect place to both train and compete!” said the 19-year-old triple champion.

A total of 57 horse-and-rider combinations battled for the Young Riders medals, and 13 countries were represented in the team competition.

And continuing the overwhelming German theme, 13-year-old Schmitz-Morkramer went on to scoop the Children’s Individual title. An impressive score of 78.607 clinched it, and it was Dutch girl Lara van Nek who earned the silver with a great score of 75.786 while Denmark got onto the podium when Annabelle Rehn and Aros A Fenris posted 74.893.

Double-gold medallist Schmitz-Morkramer put in excellent preparation for this year’s Championship with a series of great results at the Olympic test event in Hagen (GER) where she pinned team-mate Steisslinger into second and van Neck into third in the Children’s Individual competition.

A total of 50 competitors and nine teams lined out in this division.

The only category in which the Germans were thrown off-course was in the U25 in which The Netherlands’ Jeanine Nieuwenhuis broke their stranglehold. However even though she posted the top score in the Intermediate ll which decided the team medals, it was Germany who claimed the team title here yet again when Jill-Marielle Becks (Damoris Delorange) finished second, Bianca Nowag (Sir Hohenstein) finished third and Raphael Netz filled fifth place. Fourth member of the gold-medal-winning German side was Ann Kathrin Lindner (Gunfire).

But 24-year-old Nieuwenhuis and the 14-year-old TC Athene reigned supreme in both Friday’s Grand Prix and Sunday’s Freestyle, pinning Nekeman into silver and Germany’s Becks into bronze in the former, and Germany’s Nowag into silver and Denmark’s Hoffmann into bronze in the latter. She first stood on a Championship podium when helping claim European Junior team gold in Bern (SUI) in 2012, and with TC Athene also won the Young Rider Individual title at Oliva (ESP) in 2016.

A total of 34 horse-and-rider combinations and teams from seven nations lined out in the U25 division.