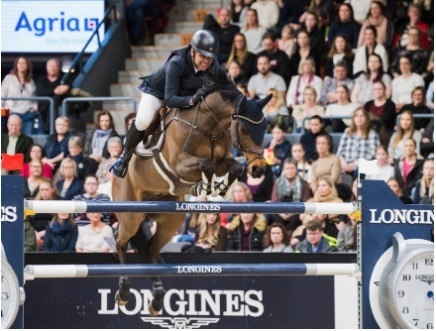 But, not satisfied with having stolen the show with the ride of his life on his brave little gelding VDL Groep Quatro, Gulliksen added even more drama when taking a tumble from the horse during the prizegiving.

“I feel fine actually - except for my arse! I wouldn’t change anything that happened today. This crowd – of all the shows in the whole world there is no crowd like this. Even to fall off it doesn’t matter, I couldn’t be happier. This is definitely the highlight of my career!”, said the 60-year-old rider afterwards.

The result saw him rocket up to 10th place in the WEL rankings so he’s now well-qualified for the much-anticipated Longines 2020 Final in Las Vegas, USA next April where current league leader, Switzerland’s Steve Guerdat, will defend his title for the fourth time. A total of 18 riders from the Western European League, apart from the defending champion, have now booked their tickets to the showdown in the Nevada desert, and Balsiger claimed his spot by moving into 15th place while Staut was already guaranteed a place, finishing fourth on the final leaderboard after a great run over the winter months.

The contours of the Scandinavium Arena always ensures a strong challenge, and today was no exception as only five of the 32 starters found the key to Peter Lundstrom’s tough 14-fence first-round track. The spectators groaned loudest when their own Henrik von Eckermann (Peter Pan) and Peder Fredricson (H&M Christian K) made it all the way to the very last fence only to pick up a fault there, but their long-time hero Rolf-Goran Bengtsson saved the day when making the cut with the big grey, Cassilano Jmen.

He was first to go against the clock with this relatively new ride and left the door open with two fences on the floor in 48.52 seconds. Gulliksen was next into the ring, and his little 14-year-old gelding gave him everything he had to come home clear in 45.75 seconds to put it up to the remaining three.

Belgium’s Olivier Philippaerts looked set to knock the Norwegian off his pedestal until H&M Legend of Love hit the first element of the double halfway around the new track, and Staut looked really threatening with the super-fast For Joy van’t Zorgvliet HDC who raced home in the quickest time of 44.51 seconds but lowered the vertical third fence along the way.

Now only Balsiger could stop Gulliksen from taking the win, and this talented 22-year-old who won the opening leg of the series in Oslo last October made no mistake, bringing the 13-year-old mare Twenytwo Des Biches home in 46.45 seconds which slotted him into second place. It would a glorious day for Gulliksen, and despite his sore bottom he was in flying form during the post-competition press conference.

“I’ve been coming to this show for 27 or 28 years and I always hoped for a day like this!” he said. And he talked about the courageous little VDL Groep Quatro who carried him to glory this evening.

“I bought him from (Dutch rider) Mikael van de Vleuten and I think no one thought he would jump like he jumped today. He doesn’t have all the scope but he is so athletic and he believes he’s just as good as any other horse! There was no place on the course today where I thought he would struggle - he just makes it happen. He’s a bit like a pony, and he never stops - he amazes me more and more!” Gulliksen said.