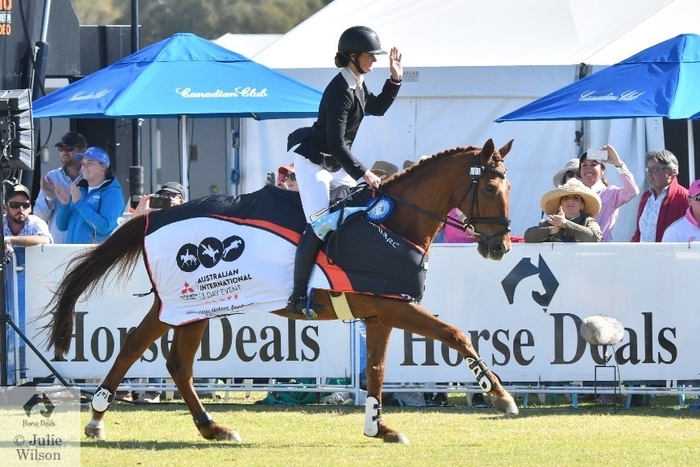 Hazel Shannon and 'Willinga Park Clifford' created Adelaide eventing history today. They won this competition in 2016, 2018 and this year again claimed the Mitsubishi CCI5-L. There are only a handful of occasions in the world of eventing where the one rider has ridden the same horse to win the same CCI5 competition three times and Hazel and Clifford are in elite company. Photo Credit: Julie Wilson Equestrian Photography

Hazel Shannon is the first rider to achieve a trifecta on the same horse at the Mitsubishi Motors Australian International 3 Day Event.

Shannon brought home the trifecta on 14-year-old Chestnut, Willingapark Clifford, at the conclusion of the MMAus3de on Sunday, November 17, after a stellar effort in Dressage, Cross Country and Show Jumping.

It is the third time that Shannon has brought home gold at the five-star event.

The New South Wales rider achieved a total penalty of 38.70 which included:

“It blows my mind to think about what we have achieved and where we have come from,’’ Shannon, 27, said.

“I wasn’t born into an eventing family or community. I came down from Far North Queensland to NSW to work for Heath Ryan for what was meant to be a gap year and 10 years later we have done this.

“That’s how I met Clifford. He’s changed my life and the partnership I have with him has achieved things I never thought possible.’’

Clifford, a former racehorse, was the only horse competing in this year’s MMAus3de to have previously won an event in Adelaide.

“The MMAus3de attracts the highest standard of competitors from across the Southern Hemisphere, and this was certainly true in not only Hazel, but all the other competitors this week.

“We are incredibly proud that this historic win was achieved by Hazel right here at the MMAus3de, and we are looking forward to watching her career continue to progress. We hope that Hazel’s historic achievement will see her put into Australian colours for Tokyo next year.”

Mr Rolton acknowledged the strong and ongoing support of the South Australian Government for the staging of the event, with the MMAus3de the only Concours Complet International (CCI)* five-star event in Australia, and one of only six held throughout the world.

“We are thrilled our event enjoys such strong support from the Premier and Tourism, Trade and Investment Minister David Ridgway, who have both been here this weekend selling the virtues of what we have to offer,” Mr Rolton said.

“As a globally-significant event comparable only to the Tour Down Under in its world tour status, we are able to leverage our event into overseas investment missions and global partnerships.

“We work every year with the State Government about their co-investment and how we best fit into their sport, tourism and trade agendas. We look forward to continuing their involvement, just as we look forward to working with our corporate sponsors who fund almost 40 per cent of our great event."

This year’s event was the Australian selection for the 2020 Tokyo Olympics, attracting some of the best horses and riders from across the Southern Hemisphere who competed for their place on the Australian Olympic equestrian team.

It also had the biggest prize pool in the Southern Hemisphere with more than $150,000 in winnings.