A donkey left heartbroken following the loss of his best friend has now found a new companion thanks to international animal welfare charity The Donkey Sanctuary.

The 24-year-old male donkey called Max, was left forlorn and lonely after the donkey he lived with for many happy years sadly passed away due to colic. Now thanks to efforts by the charity, Max has been introduced to Marian, a 20-year-old mare, and the pair have become inseparable ever since. 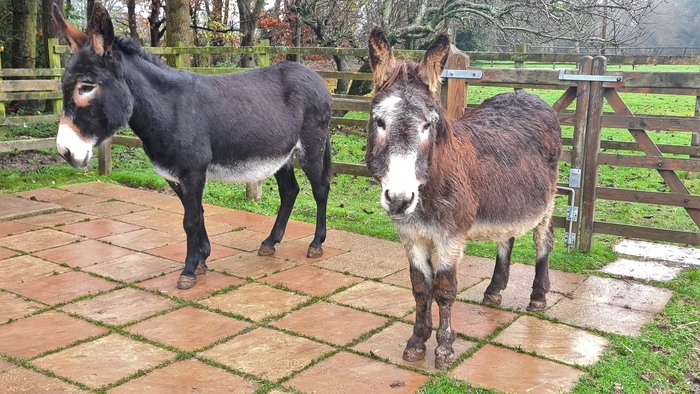 Max and Marian (left) at their home together - The Donkey Sanctuary

Marian lived at The Donkey Sanctuary in Devon, and had initially been passed over as being unsuitable for rehoming due to a dental condition she was born with. But, when Donkey Welfare Adviser, Tewsday Herbert found out about Max’s fate, she knew she had to act fast and find him a new companion.

After sending Max’s owner some photographs, it turned out that Marian looked very much like Max’s companion Rosie, a sign that would help bonding if they were introduced.

After discussions with the Veterinary Team at The Donkey Sanctuary, Marian was given a full medical examination by veterinary surgeon Vicky Grove to ensure she was fit and well. Then after dental treatment and farrier work to her feet, she made the journey to join Max at his Berkshire home.

Max had been extremely close to Rosie. He had been alone since November and had spent much of his time at the fence looking very lonely, so Marian proved to be the perfect soulmate and the pair hit it off straight away. Lacking confidence, Max was smitten as Marian took the lead, proving to be the strong character he needed.

Marian’s dental condition that initially meant she was passed over for rehoming, requires specialist treatment every six months. Fortunately Max is also seen twice a year by one of the UK’s top dental vets, meaning she will also receive the best care for her condition.

Vicky Grove, veterinary surgeon at The Donkey Sanctuary said: “When a donkey loses a bonded companion, the need to find a replacement is urgent. However, we try to find the best match, which in Max’s case meant an older, single donkey.

“A rehoming medical allows us to identify any age-related ongoing issues, then communicating this with the potential home to ensure additional care is put in place. As Marion requires expert dental care more frequently than the usual annual check-up, it turns out that the home is already perfectly prepared as Max is seen regularly to address his own dental issues.

Vicky concluded: “It is so heartening to see the joy Marion has brought to Max and his owner.’

Tewsday Herbert, Donkey Welfare Adviser at The Donkey Sanctuary said: “Donkeys form strong and long-lasting friendships and the separation of bonded donkeys can often cause extreme distress in the form of pining behaviour. So it was very important that we found Max a new companion as quickly as possible.”

Max’s owner, Sally Hunt said: “Marian has been a delight since she has arrived and she given Max a reason to live again. Donkeys are truly magical!”