Holloway unveils a star in Vegas 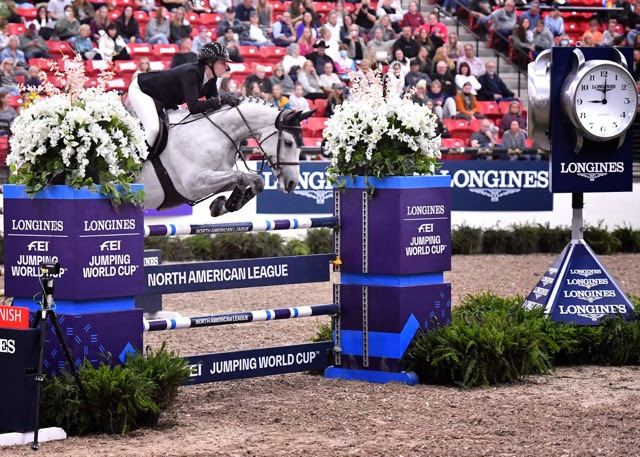 Hunter Holloway (USA) knew she had a talented mount in the 10-year-old Westphalian mare Pepita Con Spita well before stepping her up to the World Cup level last month in October. But the 23-year-old professional was insistent upon waiting before she allowed her mare to make the next step in her career. In fact, it took six international grand prix victories in 2021 to convince her. The patience paid off, as it took just three World Cup starts for the pair to top the Longines FEI Jumping World Cup™ Las Vegas (USA) at the South Point Arena, just minutes from the iconic Las Vegas Strip.

Holloway led an all-American, all-female podium in Vegas, finishing ahead of 21-year-old Natalie Dean (USA), who earned a third World Cup placing in as many starts aboard her own Chance Ste Hermelle. Laura Hite (USA) finished third after jumping the first clear round of her World Cup career aboard her longtime partner, Calypso van de Zuuthoeve.

"She's been a fantastic horse to bring along," Holloway said. "Hopefully she'll be a team horse for the future, so that's something we'll look forward toward. Building a relationship with her has been awesome. She's a sensitive type of mare that gets better and better with each class in each year."

Guilherme Jorge (BRA) designed the course for Saturday night's feature event in the South Point Arena, a most unique venue on the North American League in that the competition arena is located within the South Point Hotel. Rails fell throughout his winding track, which featured technical tests at every turn, particularly through the final line. The final 1.60m vertical fell for Conor Swail (IRL) and Vital Chance de la Roque, who kicked off the 2021/2022 NAL season with wins at Vancouver (CAN) and Sacramento (USA).

Six other combinations advanced to the shortened track, but clear rounds were still hard to come by. Holloway was the first to produce a double-clear effort, and she set a stiff standard at 37.77 seconds. Only Natalie Dean could replicate a second clear round, but she settled for second, more than three seconds (40.83 seconds) behind the winner.

"That mare is super consistent going quick, and the faster she goes, the better she is," Holloway said. "So, I was always going to go for it. That was my plan from the start with her, to give it my best go."

From here, Holloway's focus is forward, and she continues on with the NAL with the confidence that her mare is fully prepared for bigger tests ahead.

"[The Longines FEI Jumping World Cup™ Final] is something that we’re aiming for with that horse. She’s a perfect age for it, and she’s going to be really ready for it by then," Holloway said. "We’re excited to keep going with her and see how things shake out."

While Swail did not make the jump-off, his 11th place finish helped him regain his lead in the NAL standings with 43 points. Tiffany Foster (CAN) sits second with 42 points, while Dean moved into third with 41 points. The North American League continues in Fort Worth (USA) on 18 December 2021.