Three cold, malnourished and shivering donkeys who were rescued from a muddy Lancashire field on New Year’s Eve last year are now, six months on, thriving in the care of the international animal welfare charity, The Donkey Sanctuary.

The donkeys, including two foals and one adult stallion, were so skinny their bones were showing through their winter coats. All three were infested with lice and one of the foals had hair loss on its stomach from excessive rubbing against barbed wire fencing to alleviate the itching and irritation caused by the lice.

All three animals also needed urgent farrier attention to trim their feet to alleviate any suffering caused by overgrown hooves. 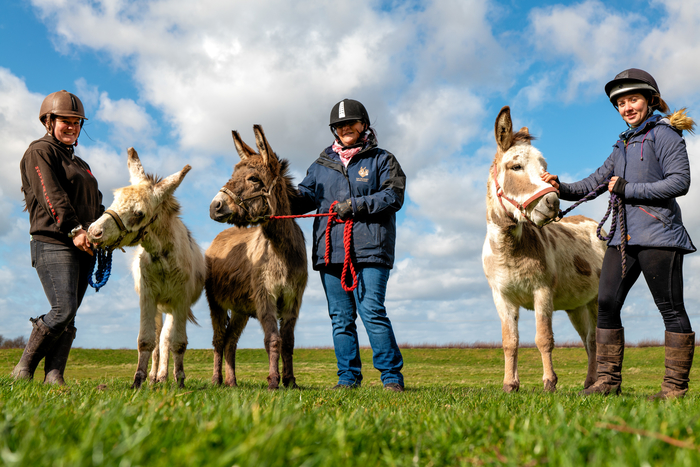 The New Year’s Eve rescue was part of a multi-agency response with Lincoln-based charity, Bransby Horses, the police and RSPCA.

Adele Crompton, Donkey Welfare Adviser, from The Donkey Sanctuary who was part of the rescue team, said: “It was heart wrenching to see the donkeys so clearly undernourished and suffering outside in the harsh winter weather.”

Now, nearly six months on, Adele can confirm a happy ending to the rescue: “Despite the horrendous life they had endured, the trio responded fantastically to their new grooms. Being naturally inquisitive and trusting, the foals in particular, were quick to learn and respond to compassionate handling. It’s so rewarding to know they are now safe and thriving thanks to the hard work of all our welfare staff and grooms.”

The rescued donkeys, who have been relinquished into the care of The Donkey Sanctuary by the RSPCA as no owner could be identified, will now be given a safe and loving home for life through the charity’s Rehoming Scheme.

During the Covid 19 crisis, The Donkey Sanctuary has still been responding to urgent welfare concerns. Now the Government has approved guidance for rescue and rehoming organisations to resume rehoming activities, the charity has begun rehoming donkeys once again.