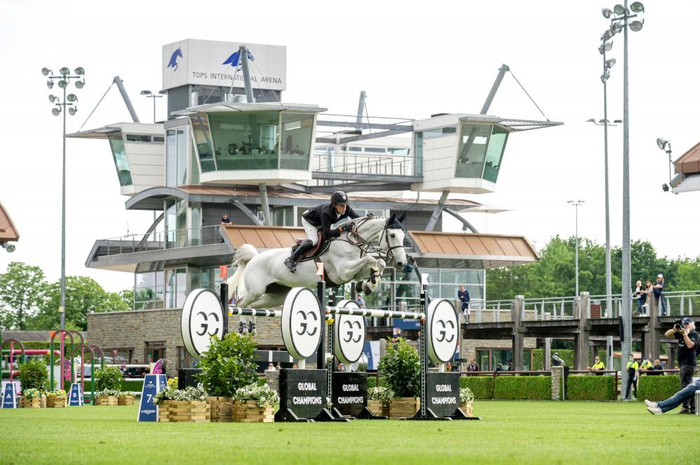 In a thrilling final showdown at the Tops International Arena, on form Maikel van der Vleuten and Kamara van't Heike powered to victory in the last class of the weekend in the Longines Global Champions Tour of Valkenswaard.

The last day of competition at the venue saw plenty of drama, but it was the lightning fast home hero Maikel van der Vleuten who denied Emanuele Gaudiano of the win just ahead of Harrie Smolders who's currently second on the LGCT overall season ranking.

A delighted Maikel praised his horse, saying "It’s a super way to finish the weekend. Yesterday, I already had a great day with a second place in the Grand Prix. I can really feel my horses are confident in this arena which says it all. It is incredible you can hardly see horses have been jumping here. Really fantastic."

Uliano Vezzani’s final 1.50m course of the weekend featured the troublesome treble combination set down the middle of the arena which proved to be one of the trickier challenges, with all elements falling if riders were unable to get the perfect line to it.

The time allowed was tight and the horses had plenty to look at in the expansive arena but the jump-off was filled with 10 world class combinations all hungry for the win in the stunning grass arena.

First to go in round one and the jump-off was talented Belgium rider Gudrun Patteet. She came back with plenty of confidence, however the pair took the turn back to the penultimate fence too tight and Sea Coast Kashmira Z took off on a funny stride unbalancing Gudrun causing her to turn before the final fence to re-group.

Daniel Deusser and Casallvano blazed around the arena, the bay gelding jumping his heart out for the German rider. But it was a hard knock at the penultimate fence and they had to settle for four faults, despite being faster.

Emanuele Gaudiano is always a dangerous contender on his mare Chaluo who has an unusual jump, but covers the ground with immense speed. They put the pedal to the metal, smashing the initial pace setters, producing the first double clear in 39.25 sec and raising the bar for those behind.

The first hope for a Dutch win rested on the shoulders of experienced rider Harrie Smolders. A brave turn put him up on time at the half way point with Monaco, taking a chance to the last, the pair stopping the clock in 39.35s, just milliseconds behind the Italian rider.

Niels Bruynseels chose a different tactic with Ilusionata van't Meulenhof and was off the pace, finishing clear in 41.12 seconds leaving the door open for the rest of the world class field to come.

It looked like Laura Klaphake and Davenport VDL were opting for the steady approach to bring home the double clear but the big striding stallion covered the ground with ease and came home in a respectable time of 40.62 sec to claim sixth overall.

Dutch hopes soared as Maikel van der Vleuten and Kamara van't Heike sped around the arena, the naturally quick horse eating up the ground with her larger strides. As they galloped through the finish gates, taking just 0.07s off Emanuele’s time to take over the lead and finish in 39.18s.

Willem Greve chased his fellow compatriot Maikel down all through the course, but a check to the final fence with Grandorado TN would see them finish clear, but with a slower time of 40.33 seconds and rounding off the top 5.

The final rider was young gun Andrzej Oplatek on his stunning grey Stakkatan. The pair put in a solid performance in one of their biggest jump-offs to date. But they couldn’t quite match the pace and crossed the line in 39.63 second to take fourth place.

As no one could match the pace it would be a win for Maikel van der Vleuten once again at Tops International Arena. The Longines Global Champions Tour now looks to Stockholm, Sweden, for the 5th leg of the 2021 Championship race.