Adam Mundy is a trailblazer at just nine years old. He has become the first to take the leap from a Pony Club Australia Accredited Riding Centre to his local Pony Club.

Late last year, Pony Club Australia (PCA) created ‘Centre Membership’ where people of all ages can start learning to ride, or return to riding after a break, through the PCA syllabus delivered by a PCA accredited riding centre. It enables people without a horse to learn about how to care for and ride one safely.

And now a confident and keen Adam, who initially joined Pony Club through Sydney Riding School, is leasing a horse and has joined Arcadia Pony Club in Galston, NSW. 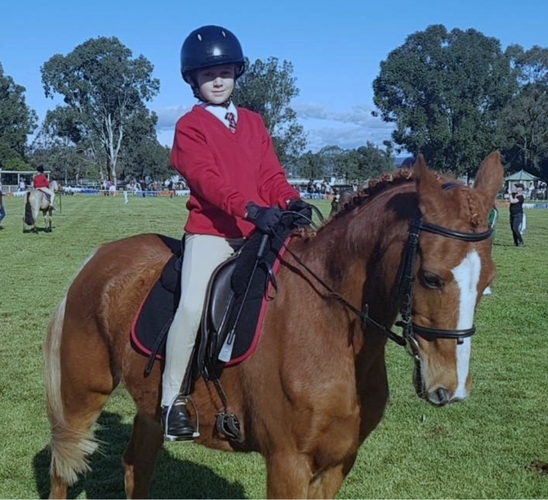 Below: Adam Mundy and ‘Yogi’ at one of their first competitions.

Sydney Riding School is a foundation member of the program which is funded by a Sport Australia Move it AUS grant. Centre proprietor and successful mounted games and show jumping rider Sarah Beale says, “We are so glad to see Adam’s success transitioning to Pony Club. The Pony Club Accredited Centre program is a great way for riders to learn all aspects of riding, horse care and behaviour in a structured way and also reinforces the need to understand how and why we do things in certain ways.

“Adam’s journey highlights this. He was very motivated to get his workbooks done and has enjoyed practising these on the riding school horses and again on his own horse. We are really excited to watch him continue to grow as a rider at Arcadia Pony Club.”

PCA Participation manager, Dr Kirrilly Thompson, said one of the main reasons PCA introduced Centre Membership was to provide a new pathway into horse ownership and Club membership. “We knew that there was a need for Centre Membership, but we had no idea that less than one year after launching Accredited Centres, we would be celebrating the first rider to transition from a Centre to a Club.

“Adam’s transition is testament to the quality instruction he received from Sarah using the Pony Club Australia manuals and syllabus at a riding school. Well done to Adam Mundy and his family, and Sydney Riding School.”

Adam’s mother Elizabeth added, “After leasing his pony ‘Yogi’, Adam transferred his membership to Arcadia Pony Club in July. Adam has attended rally days, been through two rounds of jump grading and competed at several competitions. His first outing was at the Pony Club Zone 23 Jumping Equitation Day where he earned a reserve champion ribbon.

“The skills learnt with Sarah and her team at Sydney Riding School have given him so much confidence I can’t speak highly enough of them, both in terms of turning out a lovely little rider but also by following the PCA program he’s got a sound knowledge of horsemanship. That has helped in the transition to managing his own pony. He cleans his tack regularly, and feeds, grooms and handles Yogi confidently in all manner of situations.”

Centre Membership for riders has been discounted for the remainder of 2020 and there are now 26 accredited centres throughout Australia.