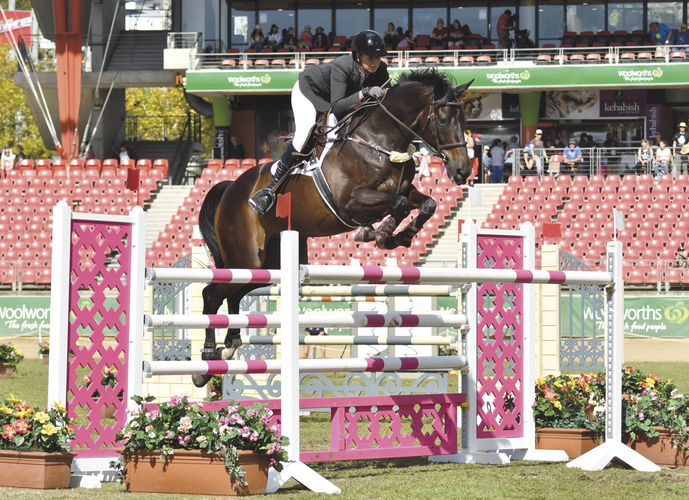 Finding Thoroughbred jumping at the highest level is today quite a rare find and when we heard and then saw Caitlin Bolger’s, Danzastar jump at Equifest in Sydney in early April, we pounced. Despite the unfavourable conditions due to the rain, Danzastar demonstrated his talent and took sixth place in the 1.40m Lady’s Championship.

Danzastar came from the very best of families. He was bred at Arrowfield Stud and foaled in 2003 and is by the successful Dainhill son Danzero that won over one million dollars in stakes money. Danzastar’s dam, Colour Me Lucky was bred at the Holmes a Court family’s Heytesbury Stud south of Perth. So a privileged beginning; but as has been proved time and time again, whether you are the result of affluence or born totally on the wrong side of the tracks, all Thoroughbreds are athletes and bred to win races; no matter where they come from, some do and some don’t. I guess that is what makes it all an intriguing lottery. Danzastar had three trial runs at Belmont Park in Perth between August 2006 and April 2007. He was 7th of 8, 9th of 9 and 9th of 9. He was big (now 17hh), black and a good type, but he was not a racehorse. Looking at his pedigree, Danzastar has some interesting performance breeding. He has Nearco on both sides of the family as well as Star Kingdom and Blue Peter on his sire line. His dam line also incorporates the French stallion, Bois Roussel that has been influential in Sport Horse breeding in Europe and interestingly has Carbine NZ in his breeding. Horses flying all over the world is a common occurrence today, but back in the 1930s finding an Australasian stallion in the breeding of a French horse is worth a comment at least.

Danzastar found himself at the Mixed Thoroughbred sale in June 2007 and was sold for $2,000. The new owner did not have success with the big horse and sometime later sought help from a local racehorse stable. Former eventing rider and horse breaker, Sarah Dye takes up Limo’s story. “I did not know him as a racehorse, but he was purchased at the sales because they liked the look of him. The girl that bought him had him for a while, but eventually dropped him off at the stables where I was working because he kept bucking her off. She hoped that we might be able to do something with him. The first time I rode Limo, I loved him and I thought I had to have this horse. At the time I had an untalented but quiet horse off the track and I suggested to Limo’s owner that we swap. You have a horse you can’t ride and I have a horse I don’t want; do you want to swap? She did.

“He had done nothing and was just a very green off the track horse. I started working him and the moment we put him over a jump, we knew straight away that he was something special. I just started to work him and took him to a few training days. I was an eventer and that’s what I was looking for. When he went to his first event, he just took everyone’s eye. It was only Intro, but he was jumping the moon; he was so scopey. He was not easy, however, he was very talented and his aptitude was for showjumping, not eventing. He really did not have the trainability for eventing. He didn’t handle the dressage test and he was lovely across country, but a little bit slow over the ground. His talent was really in the showjumping ring and that’s where he was happiest. I took him up to Prelim, but I knew he was not going to make a top grade eventer. I had him at Bunbury Agricultural Show in the EA jumping and Caitlin’s dad, Glen came up to me and asked if he was for sale.”

“We got him when he was a seven year old,” explains Caitlin. “We saw him at an Agricultural Show. He looked really flash; he was big and black and jumping everything by a mile. Yes, he was for sale, but Sarah wanted a lot for him. He went to Rory Hovell at Yalambi Stud for a month’s trial, but that didn’t work out and Sarah rang us and asked if we were still interested. We trialled him, did our own pre purchase on him and took him home. He was not an easy horse to ride on the flat or to jump. He did not like any pressure on his mouth and we could not do any grid work with him, because he would try and leap over the lot. He always made a huge jump over everything, but just not correctly.

“He came with the stable name, Limo which I guess he got in the racing stables because he is big, long, slow and black. He has a very elevated, springy canter and he is very slow and when he jumps, he looks as if he is going very slowly, but that is the way he likes to go. We did a few D Grades with him and then went straight to the 1.30m classes and it turned out that he was more comfortable with the bigger classes. He progressed from there and in 2015 he was WA Jumping Horse of the Year Leaderboard winner and in 2016 he was second in the World Cup Qualifier at Perth Royal Show. He is in Section 2 at Sydney Royal and after that we go up to the Elysian Show in Queensland before heading back to the West. Limo is a bit of an odd character but he jumps.” 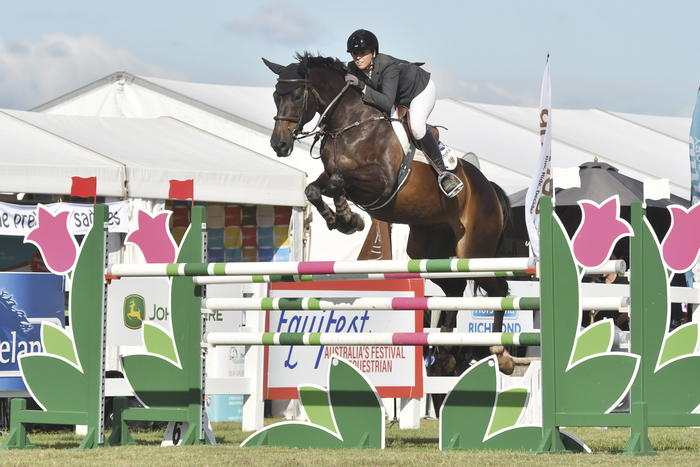