Off The Track - Pakaya Prince - AKA 'Big Ben'

Rio Para Dressage rider, Emma Booth knows plenty about ex-racehorses. The former event rider had a lot to do with off the track Thoroughbreds and understands first hand the transition they make from racehorse to eventer, showjumper or dressage horse. Not much has been mentioned about the off the tracker becoming a para dressage horse until now and until Emma.

“I thought I wanted to take on a bit of a challenge,” says Emma. Riding at the Olympic Games aboard her Danish Warmblood, Mogelvangs Zidane apparently not enough of a challenge for the 29-year-old rider from Langwarrin just out of Melbourne. “I wanted to bring an ex-racehorse into the para world. It has not really been done a lot and I just wanted to prove it is possible to retrain a racehorse to become, perhaps not an Olympic para horse, but a really good national para dressage horse.

“My boyfriend, Josh Hutchins worked for trainer John McArdle at Redgum Racing in Mornington, where Pakaya Prince was trained. Josh had worked with Ben for quite a while and knew he was coming towards the end of his racing career. Ben wasn’t a superstar, but he paid his way and was a consistent horse to have in the barn. Josh knew I was looking to take on an off the track Thoroughbred and spoke to John and the horse’s owners. They were all very happy for me to take him on and rehome him after racing. I was in the right place at the right time.”

The typey, big bay gelding, 17hh plus, Pakaya Prince was foaled in September 2012. Bred in Victoria there are plenty of well-known names in his pedigree. Ben is by the successful Reward for Effort that is by the Champion Danehill breeding stallion, Exceed and Excel. Also on the top of the line, he has Australian Champion, Rory’s Jester and Todman. Ben is out of the Galileo (by Sadler’s Wells) mare Vonnie that has Danzig and Secretariat on the dam line. A lot of well-known names there and a huge influence from one of the most influential stallions of the 20th Century, Northern Dancer. Ben raced 40 times over a period of roughly four years for six wins, three seconds and seven third placings, earning $166,795. 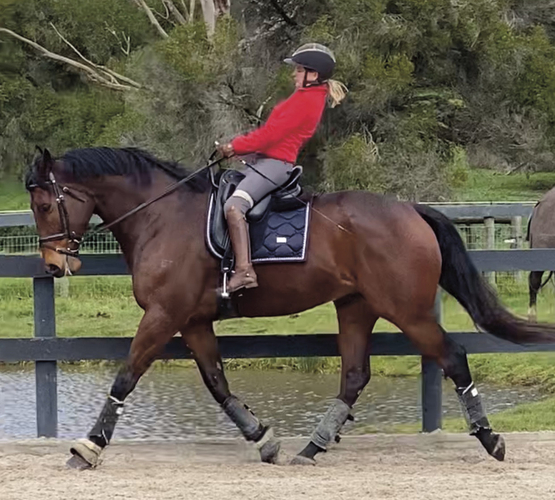 “He finished racing in August 2019,” continues Emma, “and I got him the week after that. When he arrived at my place, I had not seen him before, but I thought there was just something really appealing about him. He wanted to be around people and really enjoys the interaction. I spelled him for a good three months and we have had him now for a bit over 12 months and he is going super. Most people don’t aspire to the Olympics, but want a good, quality, safe horse that they can compete on at home and that’s what I think Ben will be for me. He hasn’t proved himself in competition yet, because of COVID-19, but once all this settles down and we are able to get out and compete, he’s going to be a strong, nationally competitive horse. We were just at the point where Ben was ready to go out, not with me, but with Matt Archibald or Ethan Height who help me, but that was just before the first lockdown and since then we have continued to work him from home. It hasn’t been the end of the world, as we have been able to really consolidate his training before taking him anywhere, which is a good thing. We can all get tempted to take them out before they are ready, so really, COVID-19 has been a blessing in disguise in that respect. Ben’s working super, he has been in training with Matt and Ethan and they have been helping me bring him on and make the transition from racehorse to dressage horse and now we are slowly transitioning him to me as a para rider. He has to understand the demands of able-bodied dressage, before I transition him to para. He’s lovely to ride and feels really safe, which is comforting. The off the track horses, by and large, are intuitive and switched on and seem to understand about para riders; they get it. They sense, or at least Ben does, that they need to look after us.

“When you find a Thoroughbred with a good temperament, they do have a willing attitude towards their work which is important. The racehorses in their racing life have to be super fit, and although they are looked after very well, they are still under quite a bit of pressure, as a lot is expected of them. However, when they come back to less energetic, low key sort of work, they kick back and relax and do not stay the hyper racehorse. They tend to have a big heart and a good brain. Ben is a really sweet, lovely, kind, gentle giant and a real pleasure to work with.” 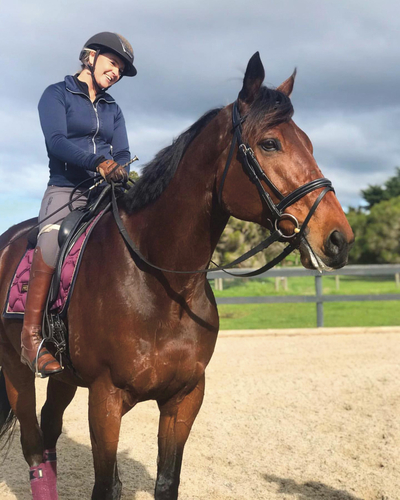