Off The Track: Sky’s Da Limit

At the recent Australian International Three Day Event in Adelaide, three off the track horses took three of the top four places in the CCI5-L competition. There are only six such prestigious eventing competitions around the world and Adelaide is the only one in the Southern Hemisphere. This year it is time for Lauren Browne’s third-placed Hurricane Sky gelding, Sky’s Da Limit to stand up and take a bow. 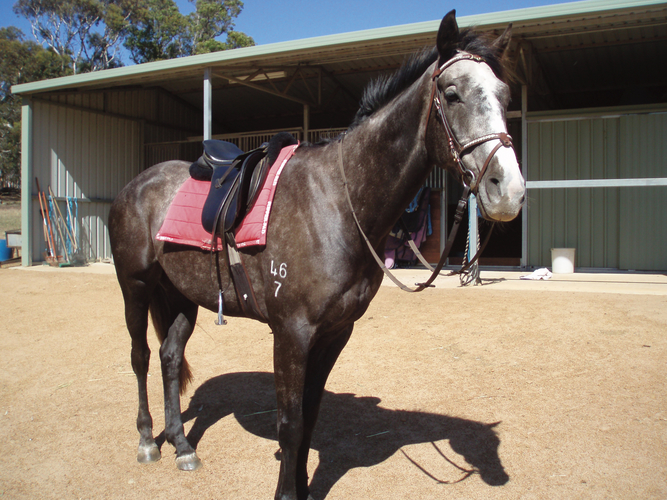 Sky’s Da Limit was foaled in 2007 in Western Australia and for his brief flirtation with racing, he was called Highly Attractive. He is by Hurricane Sky that won over $800,000 in the 1990s and sired the successful Divine Madonna and out of the Carry A Smile mare, Our Cutey that has the dramatic Oncidium, the sire of Leilani, on her dam line. Despite the connection with some of the greats of the turf, Highly Attractive only had four unsuccessful trials before he was sacked. Although a failure on the track, the Thoroughbreds are bred to have courage, stamina and a forward-thinking brain, qualities that suit the sport of three-day eventing.

“I got him at the end of 2011 when he was just turning four years old,” explains Lauren. “One of the horses I had been riding was injured and a friend, Steve Haddleton, heard about it and called to say he had a horse that might suit in the paddock. His daughter Harriet was working for Bullsbrook trainer Todd Harvey when they got him off the track. Harriet was going to retrain him herself but just did not have the time. He was almost black then and such a slight, immature horse that it is no wonder he did not do well in his trials and he was certainly not what you think of as a three day event type. I don’t know why, but I was adamant that he was going to be a good horse. I wasn’t a fan of his race name Highly Attractive, so I called him Sky’s Da Limit as I hoped that the future was going to be ‘the Sky is the Limit’. In the stable, I call him Zazu after the bird in The Lion King.

“I was 19 when I got him and I kept him at home for about 12 months, taking him to pony club and lessons with Polly Ann Huntington. He had his first competition at the end of 2012, the 65cm at Gidgegannup ODE. He won it on his dressage score and kind of shocked us all really. Normally when they go out for the first time they are a bit fresh and looky, but it was almost as if he knew he was on show and knew that he had to make it all count. People had thought I was crazy saying that he was going to be a great horse, but after that first comp, they could start to see glimpses of what I could see in him. And from that very first competition until now, he may not have always been his perfect self, but he has never completely lost it and blown a competition. He usually knows it is a time to behave and do the best he can. 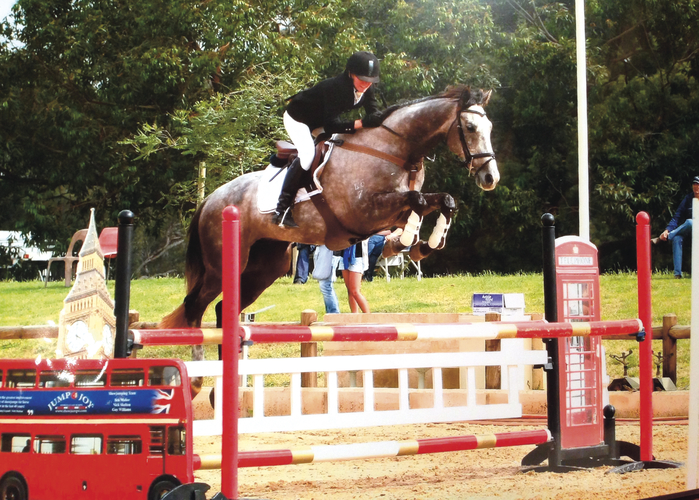 “From that first comp, he was pretty much in the placings throughout the lower levels. He was consistent and always rideable and more often than not, he finished in the top six and just kept on progressing. He had another win at 95cm at the end of 2013 and again in 2014 at 105cm. In 2015, I took him east to base with Prue and Craig Barrett at Sandhills in NSW to be a working pupil for them. It was then that we started to see glimpses of him developing into a top performance horse and we could all really see his potential. Wow, he is really going to be something! I thought.

“He did his first three day event at SIEC in 2015 and he was fourth in the two star and I was over the moon with that result. From there he just kept getting stronger, and at the end of the year he went to the Australian International Three Day Event at Adelaide and we finished about 14th in the CCI3*. I was thrilled to have completed the competition, as he had little experience at three day events. I was with Prue and Craig for all of 2015 and 2016, and that really helped to strengthen both of us and it was a great learning experience. Zazu competed in his first four star at Tamworth in August 2016 and we came second to Hazel Shannon and Willinga Park Clifford, another Thoroughbred, and I was really proud of that achievement.

“After that, I had almost six months off riding due to illness and I came back to WA to recover, and Zazu came with me. We were in WA for all of 2017 and when I was back riding, we continued to progress and won the four star at the Perth International 3 Day Event and we were WA Eventing High Point Leaderboard Champions for that year. I then decided it was time to head east again. I felt then, as I do now, that I have a top-class horse and I want to compete him against the best in the country.

“Last year (2018), was a pretty up and down year because I started a new job and had Zazu agisted out, which I had never done before; it just didn’t seem to work. However, towards the end of the year, Prue and Craig helped me move to a job with Nikki and Blair Richardson at Vantage Hill near Scone. I moved there two months before Adelaide last year and from there we have just gone from strength to strength. It is so good there because both Nikki and Blair have competed successfully at the top level and they are helping me produce Zazu. 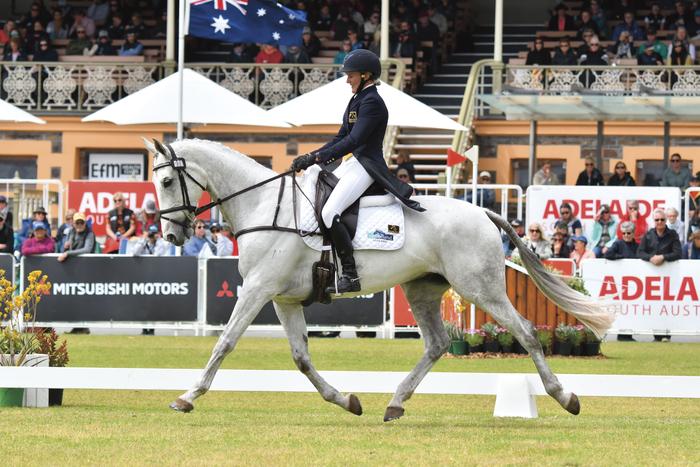 “He went to Adelaide in the CCI5 last year, but after such a disruptive year, it was not a perfect performance. He did a reasonable dressage and just had a glance off at an arrowhead on the cross country. For our first five star I was happy with a top ten result, but knew we could perform better. This year, things seemed to come together better for Zazu and me. We had 12 months more experience under our belts. I was very pleased with the trot and walk work, but he was a little tense in his canter work. I know he can produce a better test, so I thought what the judges gave him (31.00) was fair. We were third after the dressage and just .70 behind the leader. 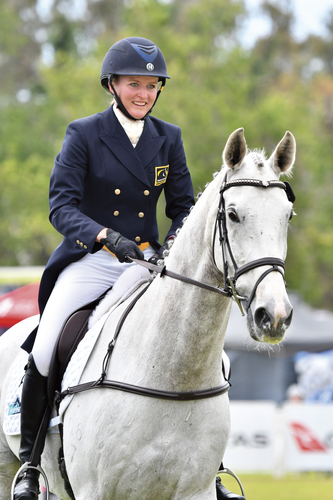 “The cross country was probably one of our best to date. My aim was to go out and just maintain a good rhythm. I knew from about fence three or four that it was going to be a good round as he was so ‘on the job’. I have been trying to do more straight showjumping, so leading into Adelaide I went to the Hunter Valley Showjumping Championships where he was third in the 1.20m and he won the 1.30m. So he was in good jumping form. At Adelaide, he just touched the high part of the wavy planks and we had a misunderstanding at another fence (we are still trying to work out what happened there). But on a positive note, I was on the buckle for the final two fences and when asked he just kept going and kept jumping. He always tries his hardest and is continually looking for what is next. Zazu loves to do his job and I believe that for eventing, nothing is comparable to a good off the track horse. It is just a matter of finding the right one and I have been very lucky in finding Zazu.

“No one knows what the future holds, but I would love to say going to Tokyo next year was a possibility, as we are qualified for selection. It is, of course, a long shot. Our focus for the next six months is to keep Zazu sound and happy and start 2020 with good performances and declare that he is fit and ready for the call-up. So we will have to see what happens. As the year progresses we will look to improving our performance at Adelaide next year.
“Without the help, advice and encouragement from Polly Ann Huntington, Prue and Craig and Nikki and Blair, we would not have been able to perform like we have. It has been a team effort and you have to have a good team behind you to succeed.

“Zazu is so brave and great across country. I really feel that we are just starting to see his true potential. He is a one in a million horse.” 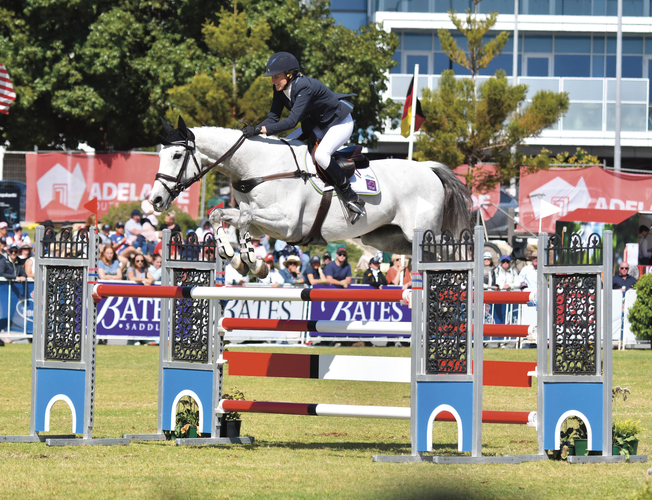