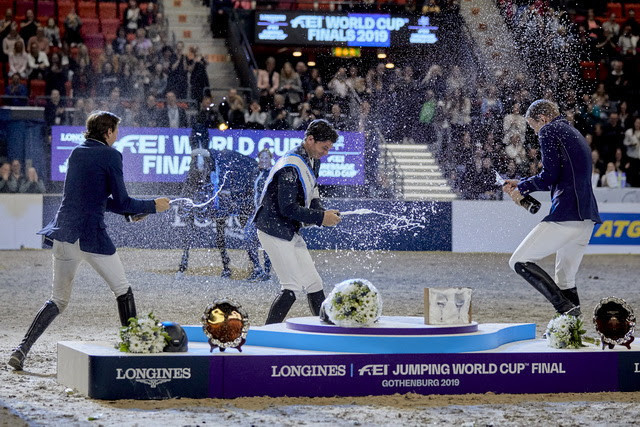 The Longines FEI Jumping World Cup™ Western European League 2021/2022 gets underway in Oslo, Norway next Sunday, and this promises to be a season like no other.

It’s two-and-a-half years since Steve Guerdat lifted the coveted title at the Final in Gothenburg, Sweden in 2019. The Swiss star was riding the crest of a wave when pinning compatriot, Martin Fuchs, into second and Sweden’s Peder Fredricson into third on that early-April afternoon in the Scandinavium Arena.

Roll on another 12 months, and with two brilliant qualifier victories under his belt Guerdat was still in flying form and was chasing the chance to become the first athlete in the history of this iconic series to win the title for a fourth time in 2020. But, as we all know now, nothing in life is certain, and with the cancellation of last year’s Final and the loss of the entire 2020/2021 Western European League season due to the worldwide pandemic there’s a ripple of real excitement and a great sense of anticipation ahead of the opening leg of the new series in four days’ time. It feels like normal order is at last being restored, and Jumping fans just can’t wait….

The FEI Jumping World Cup™ has always been a barometer of what is happening in the sport at the time, and the 2019 result was no exception. The three men who stood on the podium that final day have continued to dominate the headlines, Guerdat and Fuchs battling with each other consistently for the number one spot in the Longines World Rankings which is now held by Fredricson.

The sensational Swede, who secured Jumping team gold and individual silver for his country at this summer’s Tokyo 2020 Olympic Games, is an extraordinary horseman with a remarkable record that goes all the way back to when he competed in Eventing at the 1992 Olympic Games. And the Fredricson name is on the master list for this weekend’s fixture in Oslo, but this time it will be older brother Jens who will be flying the Swedish flag alongside Jacob Hellström, Stephanie Holmén and Douglas Lindelöw.

Accumulating early-season points is a great way to ensure a safe passage to the Final which, for the second time in the 43-year history of this prestigious series which began back in 1978, will take place in Leipzig, Germany from 6 to 10 April 2022.

Leipzig first played host in 2002 when Otto Becker, who has long since become Team Germany’s Chef d’Equipe, came out on top with the brilliant Dobel’s Cento pinning two more legends of the sport - compatriot Ludger Beerbraum with Gladdys and Brazil’s Rodrigo Pessoa with his three-time champion Baloubet du Rouet - into second and third respectively. And there were plenty more big names on the podium when Germany reigned supreme once again in 2011, Christian Ahlmann posting a memorable victory with Taloubet Z ahead of Canada’s Eric Lamaze and his superstar horse Hickstead, while The Netherlands’ Jeroen Dubbeldam and BMC Van Grunsven Simon lined up in third.

One of those hoping to collect some of those early points this coming weekend will be Brazil’s Marlon Zanotelli who is currently ranked fifth in the world, and there are plenty of other heavyweight contenders including French star Kevin Staut and Germany’s three-time series champion Marcus Ehning.

However the list of athletes from 16 different countries also includes a bunch of rising stars. Switzerland’s Bryan Balsiger was only 22 years old when winning the Oslo leg of the series two years ago with a superb performance from Clouzot de Lassus that left the rest trailing in his wake in a 12-horse jump-off against the clock. It marked a turning point in the career of the young man who was called up to the Swiss team for the Tokyo 2020 Olympic Games this August before helping clinch team gold at the Longines FEI Jumping European Championships 2021 at Riesenbeck in Germany just a few weeks later partnering AK’s Courage.

The talented athlete from Neuchâtel near Lausanne will be back in Oslo this week with his medal-winning mare, hoping to get the new season off to the perfect start. And also in the hunt will be two young Britons, 22-year-old Harry Charles and 20-year-old Jack Whitaker, both sons of Olympic medallists and both members of the exciting young British side that clinched the Challenge Cup at the Longines FEI Jumping Nations Cup™ Final 2021 in Barcelona, Spain less than two weeks ago.

On the other end of the age spectrum will be the always-competitive Norwegian, 61-year-old Geir Gulliksen and his son and daughter, Johan-Sebastian and Victoria who are listed amongst the strong representation for the host country, all hoping to make their mark from the outset.

There are a total of 11 qualifiers in the 2021/2022 series, with Lyon in France presenting the second round in two weeks time before Verona (ITA) and Madrid (ESP) host legs three and four in November. Then it’s on to La Coruña (ESP), London (GBR) and Mechelen (BEL) in December before Basel (SUI) and Amsterdam (NED) get things going again in the new year. The last two qualifiers are scheduled for Bordeaux (FRA) and Gothenburg (SWE) in February by which time the line-up for the 42nd Final will be decided.

The Longines FEI Jumping World Cup™ Western European League promises a uniquely exciting season of indoor Jumping at its very best, and it all begins at 15.00 local time at the 29th Oslo Horse Show next Sunday, 17 October.