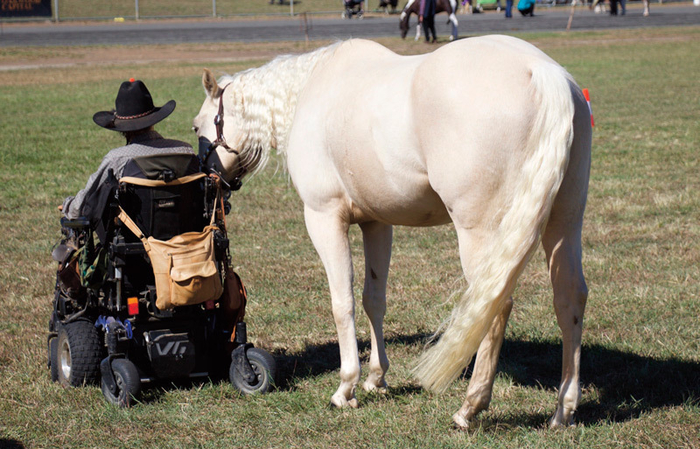 Vicki, in 2010 you had a life-changing injury that resulted in quadriplegia, how did you physically and mentally cope with the diagnosis?
At first, it was really hard to accept what had happened to me, it was like I was living in a horrible dream. I only had two days out of the nine months in hospital where I didn’t have a visitor, this love and support from my husband Cliff who is my absolute rock, my family and friends, along with my faith was what kept me going and for me to be able to see past the tragedy and focus on getting well enough to go home. I did intensive rehabilitation to help me adjust to what my life was now going to be. I was scripted an electric all-wheel drive wheelchair which gives me so much independence as I can go just about anywhere, especially as I’m able to get around in the horse paddocks and in the arena. Once I was home I interacted with the horses as much as I could with a bit of liberty and then later on doing some led classes at some local shows. This all helped to build up strength and movement in my arms and upper body. Spending time with the horses was the best therapy for my mental wellbeing, they seem to know what you are going through.

Following the diagnosis how long did it take you to come to terms with your new normal?
It took several months before I understood what it even meant to be a quadriplegic and a few years before everything started to feel like we had a bit of normality. I say “we” as Cliff and I are a team and my condition has just as much impact on him as it does me. Do any of us really have a “normal” life? We all have our own struggles or obstacles that we face through life but we have a choice on how to deal with them. If I chose to be angry and bitter I’d probably be sitting at home feeling sorry for myself and instead, I’m telling you my story.

What did your life look like before that day in 2010?
My life was definitely busy with three kids, having a full-time job, managing our own business, bookkeeping for another business and I was on several rodeo committees. I rode every day that I could as I competed in rodeo, and through the offseason I played polocrosse.

And what does it look like now?
Well, I have to say my life is now nearly as busy as it was before. I’m now a grandmother to five beautiful grandkids. We have lots of friends and family come to stay as we moved to Queensland two and half years ago. We built an arena so I would have a safe place to ride so I’m riding a lot. There are other people using the arena as well which means I have a horse community right on my doorstep which I love. Recently, I have been riding in some local shows that have been holding disabled rider classes for the first time and I have now started para-reining which is so amazing.

Six and a half years is a long time out of the saddle. What was the deciding factor that it was time to saddle up again?
When the doctors told me I would never ride again I didn’t believe they were right but didn’t know how we were going to accomplish it. I saw a YouTube video about 18 months after my injury of a guy in the States who had a similar spinal injury to me and he was riding. I thought if he can do it so can I.

What was the process to make it happen?
Firstly we had to find a saddler to make an adapted saddle which took so long as no one in Australia had ever heard of a quadriplegic riding. We finally were given the name of someone who was willing to meet the challenge. So he and Cliff worked together in designing and making the saddle. We sourced a wheelchair backrest and a spring setup was engineered so that I can move with the horse rather than getting slapped in the back. As I have no feeling from the chest down and not much upper body strength, I have a seatbelt to hold me upright which is a quick release velcro setup. Pressure sores (of which I’ve had my fair share of) are a constant battle with spinal injury so getting the right cushion to sit on in the saddle has been the biggest challenge. The SPOT (spinal patients outreach team) were able to do a “mapping” of me in the saddle on different cushions until we found one that worked. I use reins with a loop and then a velcro strap to hold my hands and two crops to the reins as I don’t have use of my hands.

How did you go about choosing the horse that you would ride?
Initially, I bought a Quarter Horse gelding who was great to get me started as he was quiet and happy to just go with the flow. Once I got my confidence I soon realised I needed to start looking for another horse as he started to take advantage of my riding inabilities. I needed a horse that had a quiet temperament, a horse that was not worried about distractions around him, light to handle both on the ground and ridden. It took a long time to find the right horse but the wait was certainly worth it and that’s when Cruze joined the family. 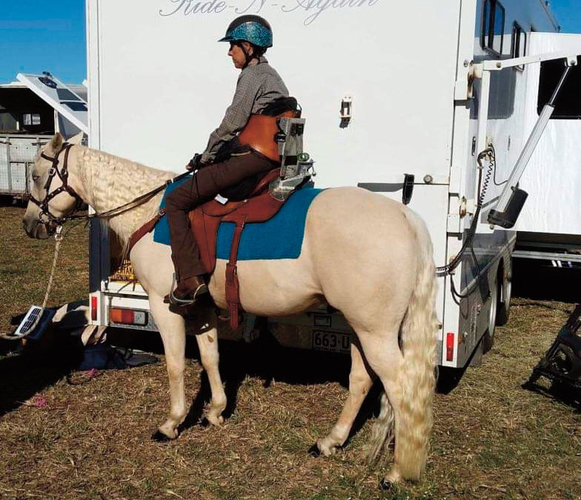 Vicki after being hoisted up on to Cruze.

Cruze is the man - what is his history and what challenges has he given you?
I purchased Cruze, MD Hankering For A Destiny, 18 months ago. He was a four year old at the time and was being ridden by a 12 year old girl. His owners knew that he was meant to be for me because of his beautiful temperament and how nothing really phases him. He somehow knows his job and just takes everything in his stride. The first time we used the hoist on him he just stood perfectly still. I’m hoisted from above him and then lowered down. He is very light to handle and ride. As far as challenges I’m yet to encounter any really. Occasionally he will shy just to remind me that he is still a horse.

What training did he require to suit your riding needs?
With training he has adapted to my voice and the two crops that I use as aids. It was like he had been trained for me already though as he just responds to nearly everything I ask of him. Now that we have started reining we are both finding cues that we can use to learn the different manoeuvres.

Together you are now competing in the reining arena, what did it feel like returning to what you love?
Growing up I have always competed in something or other. I was so happy to be riding again but as I got better at it, I craved to be competing again. When I discovered para-reining through a friend, I knew this was something that I could possibly do. I found a trainer who was willing to take us on and she has helped us to start competing. We competed for the first time a few weeks ago at the PCRS at Gatton. My goal was to get a score and we got a 62.5. To say I was excited is an understatement. I did the pattern at a jog.

How has the reining community supported you?
Immediately I felt support from the reining community when we competed, so many people came to watch us do our pattern. We were made to feel part of the reining family, so much so that Cliff is really keen to have a go at reining too. They have accommodated any needs that I’ve had and nothing is a problem for them. Everyone is very encouraging and genuinely interested in my journey.

What are your goals?
I was to go to the ABCRA National Finals at Tamworth for my first time then my injury happened three weeks prior. I was devastated that I wasn’t going. I had qualified in the event of Steer Undecorating for which I held the Australian record for over six years with a time of 1.35 seconds. I will treasure that accomplishment forever. So my first goal is to compete at the Queensland State Reining Championships in August then the Reining Nationals in Tamworth in September. My next goal is to be able to lope a pattern. 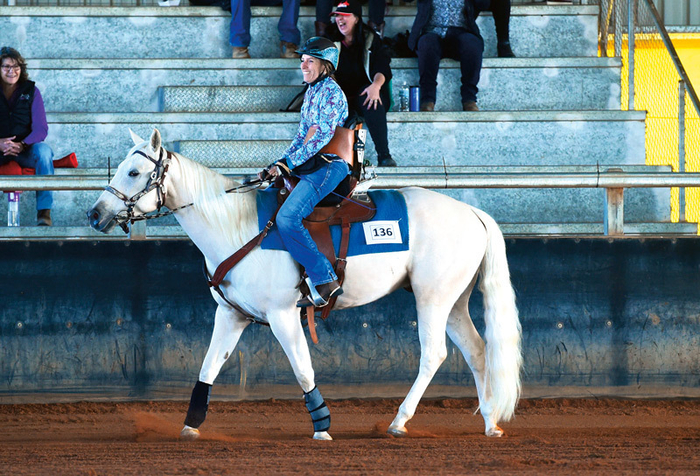 You are a true survivor with a great attitude, what have you learnt about yourself that you didn’t know before?
Patience is something I didn’t think I had a lot of but I now know that I have a lot. Determination was probably something I took for granted but it has definitely helped me to be able to achieve what I have done so far. I didn’t know that I could be an inspiration to others, I feel very humbled by that.

For other people that are facing challenges, what words of advice can you give?
Choose to rise above the challenges you are faced with by looking at the positives rather than the negatives. It’s great to have dreams to aspire to, not only do you feel such a sense of accomplishment when you reach them, but it’s also about the journey along the way. Value your family and friends as they are so important. 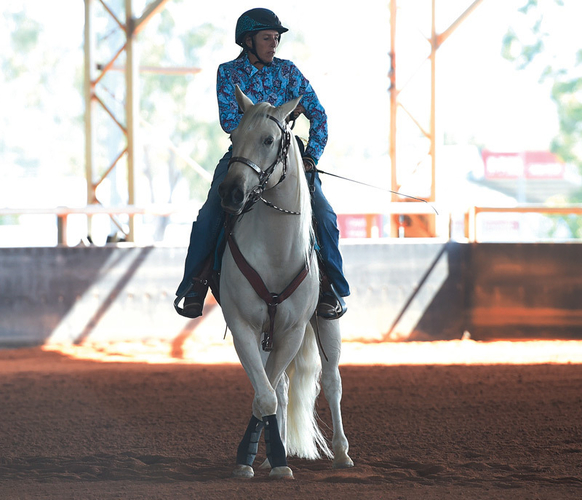