More than 100 donkeys have avoided being slaughtered as part of the donkey skin trade after they were rescued by the National Council of Societies for the Prevention of Cruelty to Animals (NSPCA) with the assistance of the Mooi River SPCA and supported by international animal welfare charity, The Donkey Sanctuary.

It is believed the donkeys were on route from South Africa to neighbouring Lesotho where it is thought they would be slaughtered so their skins could be used for the production of a traditional Chinese medicine called ejiao.

Marcelle Meredith, Executive Director of the NSPCA said: “The incident appears to signal a shocking return of the donkey-skin trade after almost 18 months of apparent inactivity. 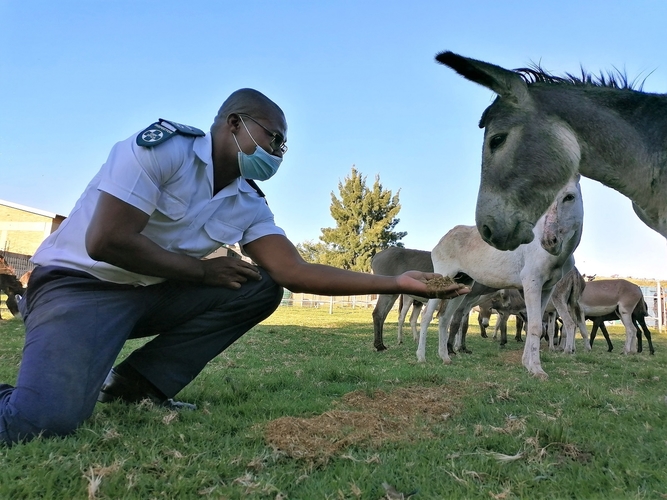 “The NSCPA began investigating the donkey skin trade over five years ago when large numbers of unexplained donkey skins were found across multiple farms.”

The NSPCA is sure the skins were used to produce ejiao and that the rescued donkeys would have been killed for their hides.

Meredith added: “The manner in which donkey skins are obtained is gut-wrenching - starting from the way the animals are handled, transported, butchered and sometimes even skinned alive.”

Authorities from the SPCA found the donkeys, including several young foals, after intercepting a convoy of trucks heading from the Mooi River region in KwaZulu-Natal to the border with Lesotho – a country seeing an escalation in the illegal skin trade for the production of ejiao.

The donkeys were suffering with severe infections as well as open wounds and some even had ears missing. Many of the animals were extremely thin with ribs showing through their hides. They were also infested with ticks.

Officers from the South African Police Service (SAPS) arrested six suspects travelling with the donkeys for having no passports of their own or legal travel permits for the animals and on suspicion of animal cruelty. All six have since been charged and found guilty of animal cruelty and for residing in South Africa illegally.

Around 36 mothers and young foals were despatched to the Kloof and Highway SPCA facility near Durban. The remaining donkeys travelled to the Johannesburg SPCA, where they will continue to be cared for until they can be rehomed.

The Donkey Sanctuary was able to support the NSPCA with funding for the transportation costs.

Grace de Lange, Senior Inspector from NSPCA’s Farm Animal Protection Unit said: “We are so grateful for the support of The Donkey Sanctuary. The charity’s generosity means we can now focus our efforts and funding appeals on the long-term welfare, veterinary needs and re-homing of these donkeys, which have suffered terrible neglect and abuse at the hands of brutal animal traders.”

Simon Pope, Tactical Response Lead, for The Donkey Sanctuary, said: “The NSPCA works incredibly hard to combat the illegal skin trade in South Africa, and Grace and her team are on the front-line of that battle. This rescue of donkeys destined for slaughter is inspirational. So too is the devotion and care now being given to these hard-working animals.

“We value the long-standing partnership between The Donkey Sanctuary and the NSPCA and are glad the continued generosity of our supporters enabled us to share some of the burden of care with the NSPCA.”

Gelatine found in donkey hides is a key ingredient in producing ejiao. Dwindling supplies of donkeys in China means traders in Africa and elsewhere are exporting additional skins to meet an ever-increasing demand.

The trade has led to widespread poaching and donkey theft in communities, which depend on donkeys for their livelihoods.

The Donkey Sanctuary is calling for an urgent halt to the largely unregulated global skin trade.

Grace added that authorities in South Africa must also play their part in halting the trade.

She said: “Other countries in the region, such as Botswana, Ethiopia and Senegal have taken action and we are calling for immediate government intervention to stop the export from South Africa of donkeys, as well as their skins or by products for any trade whatsoever.”

The Donkey Sanctuary and the NSPCA will continue to work tirelessly not only to end the cruel and unnecessary global skin trade but also to improve the welfare and working lives of donkeys globally.