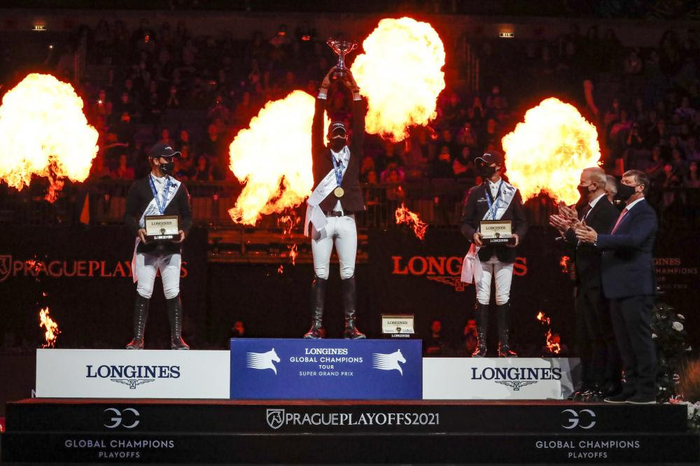 Henrik von Eckermann and King Edward were declared winners of the third edition of the spectacular Longines Global Champions Tour after they faced down extraordinary pressure.

The €1.25 million showdowns took place in front of a sell-out crowd at the O2 Arena in Prague with victory for von Eckermann greeted with a standing ovation after the Swedish rider and his amazing gelding clinched victory.

Celebrating his win Henrick smiled: "To be back in this atmosphere for me is amazing, it was a special moment for me with this crowd. I had a goal the whole time to qualify for here because I knew I would have a good chance. It is a fantastic feeling when it fits like it did today."

Maher declared: "This show has built the sport. It was one of the best atmospheres that I have ridden in for the past two years, well since I rode here last time actually. I have had many good memories here. The pyrotechnics, the light shows, are done carefully to not to upset the horses which is a hard thing to do so it brings a new dimension to the sport and makes it exciting for the public."

Sergio Moya added: "What they have created here is something special and what they give to the riders and the public you don’t get to see in many other sports."

While Moya dedicated this evening to both his and Anna Kellnerova’s fathers: "I would like to take this special moment to say it has been a hard year for me, I lost my dad and then a few months later my teammate Anna also lost her dad so it is a shame I didn’t win as I wanted to give this show to both of them."

At the press conference, Longines Global Champions Tour President Jan Tops said: "The concept of this is very special, tonight you saw the top sport. Champions of every leg this season battling it together is what makes it the most prestigious Grand Prix. The whole thing was fantastic tonight."

Jan Andrlik, GC Prague Playoffs Event Director said: "It has been a difficult year with all the changes due to covid but it feels great to make this event special and make a history of it. Creating a new set-up and technology was to make the sport more attractive to new people and we tried our best to make it different every year. "

The third edition of the LGCT Super Grand Prix featured the 15 top riders who qualified during the 2021 LGCT championship series and the extreme pressure to go fast and clear produced electrifying sporting drama from start to finish.

Courage, skill and determination were required to conquer all in this fierce battle set over two rounds and the 15 elite contenders were set on a formidable 1.65m first-round track by Uliano Vezzani in this indoor sand arena. For the ultimate challenge, with the fearsome Longines treble combination coming towards the end of the course, meaning horses still needed to be on full power to clear the test.

In round 1 the pressure showed as there were some unusual high scores and a shock elimination from Malin Baryard-Johnsson and El Barone 111 Z as the stallion slammed the brakes on grinding to a halt in the middle of the Longines combination meaning they wouldn’t return for round 2.

The first to prove the course was jumpable was second drawn Darragh Kenny who jumped clear on VDL Cartello as the Irishman looked to go one better after having to settle for second place to Maher and Explosion in the 2019 LGCT Super Grand Prix when they picked up a time fault in round 1.

One of the shock results came from Harrie Smolders and Bingo du Parc with three rails down they were the only combination to get 12 faults in round 1.

It was a pivotal round from Henrik von Ackermann and his pocket rocket King Edward jumping an extremely fast clear to secure pole position for round two giving him the best chance to check out the competition before him.

Crowd favourite and show jumping legend John Whitaker stopped the Longines timers just outside the time allowed to finish with 9 faults while it wasn’t meant to be for Sameh El Dahan and WKD Aimez Moi after a costly two early poles falling to settle with 8 faults.

So at the conclusion of round one, with score carried through to round two 5 combinations had a clean sheet and six horses and riders were hunting down the 0 falters with just one rail behind.

With a clever shake-up of the track, the second round tension rose for the ultimate showdown. First, to go Harrie Smolders was on a recovery mission with Bingo du Parc and they rose to the occasion jumping clear with just a single time fault bidding for a bigger share of the prize money finishing on a total of 13 faults.

Outsider John Whitaker didn’t take any inside turns so once again finished outside the time allowed adding 2 faults and bringing his total up to 11 faults with his tremendous partner Unick du Francport.

The pressure got to Sameh El Dahan and WKD Aimez Moi as they retired from the class midway around after a miscommunication at the Liverpool jump. Kicking off a host of riders on 4 faults Spencer Smith and Theodore Manciais threw a buck in the middle of the combination down the long side but Smith’s quick thinking got them out of trouble until a pole fell later but keeping them inside the top 10.

Niels Bruynseels was immediately knocked out of contention for a podium as he picked up another 4 faults on Delux van T & L before Daniel Deusser on Killer Queen and Scott Brash with Hello Jefferson showed their true class with flawless clears but the damage was already done in the first round finishing on 4 faults.

Current world number one and Longines Global Champions Tour 2021 season Champion Peder Fredricson had a shock refusal on H&M Christian K coming home with to finish with 15 faults and right down the order.

On a night of fluctuating fortunes, the poles kept flying for Longines Ambassador young talent Bryan Balsiger and the stunning Ak's Courage dramatically dropping them off the podium.

There was disappointment again for runner up in the last edition of the LGCT Super Grand Prix Darragh Kenny and VDL Cartello as they had the lightest of touches but cost them a spot on the podium crossing the line on four faults.

Only the second ever double clear to be jumped in a LGCT Super Grand Prix came from Sergio Moya and Alamo who is jointly owned by football star Sergio Ramos. The crowd erupted as he punched the air and pointed at the big black gelding crucially putting the pressure on the rest of the field.

All eyes turned to reigning champions Ben Maher and Explosion W but an excruciating knock at the penultimate fence knocked their chances of taking back to back wins and his chance for glory vanished in a second.

Nerves of steel were required as the competition intensified and, proving anything can happen in this sport, the drama came at every fence. It all came down to Henrik von Eckermann and King Edward who had worked all season to be in this position. The pair accelerated down the final line and soared over the finish, crucially faster than Moya and added their names into the history books by showcasing show jumping at its very best.

There was special recognition for the grooms as they received a trophy after leading the champion horses into the arena for the closing moments of the awards ceremony and the rousing lap of honour.