On a day of high drama in Abu Dhabi, Team Germany pipped Ireland to win the Longines FEI Jumping Nations Cup™ of the United Arab Emirates while the hosts and Saudi Arabia claimed the two qualifying spots on offer for the 2019 series Final in Barcelona (ESP) next October. 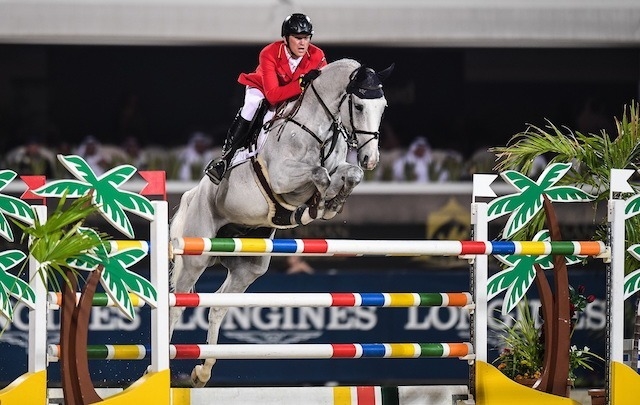 It was a convincing German victory as Mario Stevens (36), Sven Schlüsselburg (37), Miriam Schneider (38) and Philipp Weishaupt (33) took a firm grip on the leaderboard with just a single time fault to count in the first round, and they finished well clear of the chasing Irish who had to settle for runner-up spot with a final score of six. Schneider was particularly delighted, because she only got the call-up when her boyfriend, Jörg Naeve, had to withdraw from the team two days ago. She wondered if her lovely nine-year-old chestnut gelding, Fidelius G, was ready for this test.

“I hoped he was experienced enough, this was really my first tough course to do with him but over the last few days I had a great feeling with him - he was trusting me, and he showed me that again today!” she said.

Today wasn’t just about winning however, as four nations - Jordan, Saudi Arabia, Syria and the United Arab Emirates - were chasing just two places for teams from the Middle East region at the 2019 Longines Final in Barcelona (ESP) next October. UAE and Saudi Arabia each completed on an 18-fault total to clinch those spots, their quicker combined times leaving the hosts in third at the end of the day ahead of their Saudi neighbours in fourth place.

The 3.8m open water at fence four in the first round proved a challenge to many and Irish chances were rattled when David Simpson’s 11-year-old stallion, Jenson, took fright here and, losing his concentration and nerve, was eliminated a few fences later. But, with the open water replaced by an oxer in the second round, the pair returned to post a classic clear over the course designed by Spain’s Santiago Varela at their next attempt.

Team Jordan’s chances of claiming one of the coveted qualifying spots were crushed when last-line rider, Ibrahim Hani Bisharat was given the ejector-seat by his grey stallion, Chactino, over the oxer at fence five. And he wasn’t the only rider to hit the floor. Saudi Arabian pathfinder, Abdulrahman Bader Alrajhi parted company with Domingo when the gelding put in a stop, while Irish anchor, Mark McAuley, also got to eat some of the desert dirt.

Second-last to go, McAuley looked set to wrap up the now-recovered Irish effort with a lovely double-clear from Jasco vd Bisschop. But the talented 10-year-old suddenly seemed to see a ghost and pulled violently left in front of the very last fence. Miraculously the Irishman persuaded the horse to get airborne, but the pair landed in a heap of poles, and both looked completely mystified as they left the arena, fortunately unscathed.

There was no drama for the Germans however, Mario Stevens and Talisman de Mazure leading off with a clear and lowering only the new oxer at fence four second time out, and Sven Schlüsselburg giving a superb account of himself with just a single time penalty in each round with his handsome grey, Bud Spencer. Schneider had two fences down in the first round but Fidelius grew in confidence with every step and this promising pair secured the top step of the podium with their lovely second-round clear even before anchorman Weishaupt headed back into the arena.

Weishaupt’s Catokia had been foot-perfect in round one, but after the 12-year-old mare who won Thursday’s Longines Grand Prix faulted twice at the triple combination, three fences from home, the world no. 31, and the most experienced rider on the team, opted to retire. Nothing to be gained, because the win was already in the bag.

The Longines FEI Jumping Nations Cup™ 2019 series now moves on to Coapexpan (MEX) in early May where the second leg of the North/Central America and Caribbean League will take place.