The coach's snapshot with Vicki Roycroft

This series has been developed to give riders the opportunity to receive expert feedback on their riding position and how it impacts their horse, from the country's best riders and coaches. Our expert coach this month is highly successful International showjumping competitor and qualified riding and showjumping instructor, Vicki Roycroft. Vicki has been a member of three Olympic and three World Championship Teams and owns and operates Roycroft Stables located in Mount White, NSW. 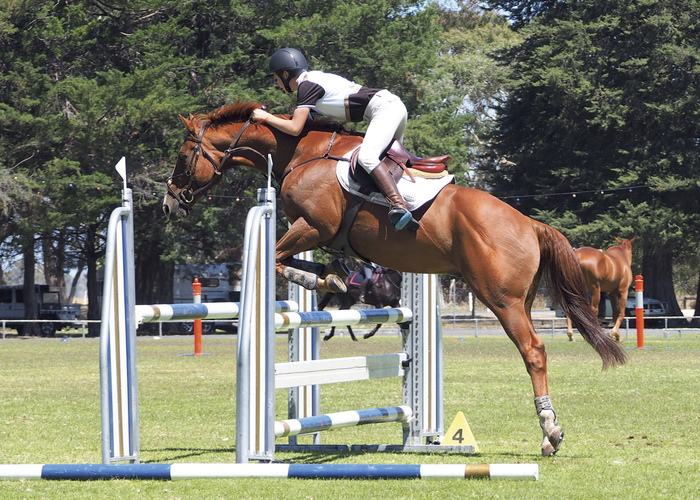 Kane's turnout is very good. Everything is tidy, tack looks appropriate and clean. Perhaps the horse boots could have had a scrub (I have separate work and show boots!), but it is important that all gear on your horse is clean and comfortable for the horse. After all, we use fresh underwear every day (well I hope so...!). The horse is making a nice shape over the fence, with a lovely expression on his face. Kane has appropriately used back studs for the show, and I am pleased to see he has not used front studs, which I only ever use if the footing is quite slippery or deep, as otherwise it puts too much stress on a horse’s fragile front legs if they are not allowed a little movement, or slip, on landing over a fence. The footing at this show looks excellent.
However, the horse is jumping over his front end a bit, which is a bit of a Thoroughbred thing, but also partially caused by Kane being a bit in front of the motion, and having too much of his weight over Gilly's shoulders. The rider has to be in perfect balance all the time, and for sure, being ahead of the motion at a jump like this is way better than being behind. Kane should study photos of Maclain Ward, Beezie Madden or our own Chris Chugg to see what a well balanced position looks like. In saying that it is still a good picture; his eyes are up and on the line to the next fence, and he is showing a beautiful release allowing his horse to make a good bascule. His stirrups could be much closer to his toe to allow his heel to come down much better to provide a better base of support and thus balance. 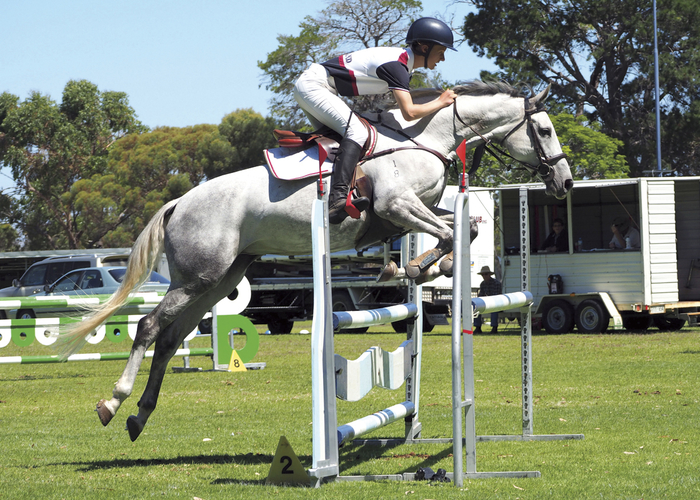 Luke also provides a beautiful picture. Gear is clean and tidy, although I note that Luke uses front studs, which I wouldn’t have thought necessary on what appears to be beautiful footing. He has to be very careful to preserve the soundness of his Warmblood cross mare, as they are not as tough as the Thoroughbreds, and are normally a little heavier in their shape and way of going. Like Kane, he is, only slightly, ahead of the motion, and his stirrup could be closer to his toe to allow that flexibility in his ankle for the low heel. Having said that, his heel and lower leg are very good.
The one jarring thing about this picture is the whip being carried in his boot! This is such an old fashioned, antiquated idea that went out with the Ark. Those that know me know that I never get on a horse without spurs and a whip. Both are auxiliary forward driving aids, and are there to be used only when necessary, but they must be ready for instant application when needed. If the horse is spooky coming to a fence, or drops in one way or the other, it takes way too long to extract the whip from the boot to use it. It only takes a couple of hours practice to get used to carrying a whip in your hand, so it feels normal, and when you become a better rider, to be able to carry it and use it in either hand comfortably.