International equine charity, The Donkey Sanctuary, has a new take on blood donors – using plasma from its own herd to treat sick donkeys across its UK sanctuaries. 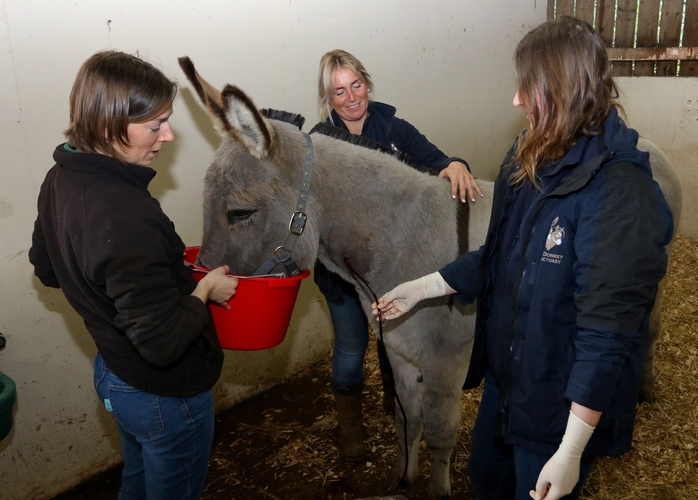 The Donkey Sanctuary was buying in bags of frozen plasma at a cost of over £100 each and the charity was keen to find an alternative. Thanks to a new blood transfusion scheme developed at the charity’s specialist hospital near its headquarters in Devon, donkeys can now be treated with blood taken from their peers.

Donors are carefully selected using guidelines approved by the Royal College of Veterinary Surgeons (RCVS). Alex Thiemann, Senior Veterinary Surgeon at the charity said: “We spent a great deal of time discussing procedures and the value of a plasma bank with the RCVS and together set up some ethical guidelines before instigating the scheme.

“Participating donkeys have to be the right age and in good physical condition – they are thoroughly health checked weighed and condition scored before they are even considered for plasma donation,” she added.
“The donkeys themselves are also only considered if they can tolerate the blood collection without being sedated because we want take plasma in an ethical way,” Alex explained. “The donkeys are continually assessed and if they show any signs of stress they are taken off the programme. We think the process is as good as it can be.”

One resident male donkey called Dusuy recently benefitted directly and quickly from the charity’s new plasma bank. Eleven-year-old Dusuy was identified as being in acute pain and tests revealed an inflamed colon. He was hospitalised with colitis and further tests suggested he needed an urgent transfusion to raise protein levels. After receiving plasma from a healthy donkey at the charity’s flagship hospital at Brookfield Farm near Honiton, Dusuy was able to spend time recovering with two close companions.

Alex explained: “Dusuy will still need additional treatment but it’s the plasma that is really life-saving. What’s rewarding for us is that our donkeys are able to give back and help save others in our Sanctuaries.”

The Donkey Sanctuary, which is celebrating its 50th anniversary this year, is a global leader for equine welfare, research and veterinary care working in almost 40 countries worldwide.
ENDS