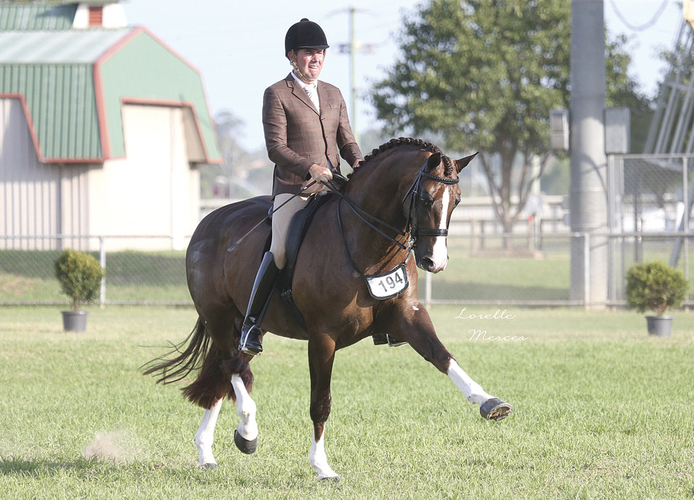 How did you come across him?
A friend showed me a picture of him at a few days old, it was love at first sight. He was bred by Judy Yancy of Yancy Farms in Florida, USA. I had been looking for a colt with an international pedigree that EBL could import to add to our stallion roster. Importantly one whom we would also compete as well. Ellington ticked all the boxes. Great breeding, from a relatively new to Australia sire, in Wynton and sensational looks. I thought a horse of this breeding being available in the Australian market and competition arenas would be a great addition and most importantly to me, his dam, Dream Rubena was just amazing and when buying a young horse I always have to love the mother.

Did you travel to the US to see him in the flesh?
He was purchased sight unseen but consideration and diligence was taken through video footage, photographs and vet checks. But I’m a strange one when it comes to buying or choosing horses, I’m either 100% certain from the first pictures and videos, or I’m not in (this sometimes scared many of my clients but thankfully they trusted me). Of course he was fully insured from payment in order to travel.

Was the process of importing him to Australia easy?
Judy Yancy was a pleasure to deal with and made the whole importation process a breeze. He had to stay in the US until he was old enough to travel and he arrived in Australia when he was about 9 months old.

Were your initial plans dressage or for the show ring as well? Dressage is our long term goal with Ellington. His talent and trainability allow me to think he will be very competitive at the higher levels. His Small Tour debut will be this year. However, EBL has a reputation synonymous with producing show horses and this is an area where Ellington has proved he can compete on a State and National level with the best Show Hunter Hacks around, so while we can do both we are really enjoying the diversity.

Did he compete in hand during his early years?
We took him out to a local show as a two year old which was an adventure to say the least, but he made up for that by winning Australian Champion Arabian Warmblood stallion or colt a few weeks later.

When did he start his saddle career?
I broke him in when he was around three and brought him on slowly for his four year old classes.

Were there any regrets with his purchase?
No absolutely none. He’s a once in a lifetime horse and I couldn’t part with him. Myself and the Mears family are very fortunate to have such a quality horse to enjoy.

How trainable is he?
Trainable is an understatement. Sometimes it feels like he’s training me. We have an amazing bond that started at nine months old. He is scarily intelligent. Super sensitive and tuned but sensible. The epitome of a performance horse. He’s too much fun actually!

What are his quirks?
He likes being the centre of attention, nobody can come into the stables without him bashing the door until they say ‘hi’.
He is also a massive sook, I’m sure he thinks he’s a 7hh Miniature, he is not tough at all, but this is also a blessing as you know if something is wrong. As he’s growing up now it’s getting easier.

How would you describe his temperament?
He’s a very laid back individual. A great horse to have in the barn. He knows his job and has no dramas, he does however love his routine in the stables and is quick to remind us when he needs attention.

How does he cope with the big occasions?
He’s the ultimate show horse. Loves the applause and the hype. He knows he’s out there to impress and takes it all in his (very big and expressive) stride!

What celebrity does he remind you of?
Hugh Jackman. 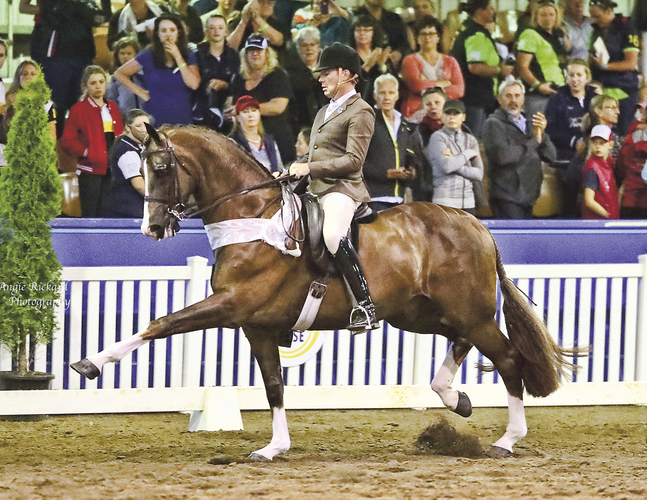 His weekly training schedule?
He is ridden five days a week, as fitness is really important for him.

What is the first thing on the shopping list for him?
New rugs - he likes to modify them. He has his old favourites but often destroys new sets of rugs in days.

What are your plans going forward?
I guess to keep enjoying showing him as a hunter until I feel he has achieved all he can. The hunter ring is really competitive at the moment, their popularity has exploded and the large hacks have some serious quality at all the big shows. It’s great being up there and having the achievement of being competitive at events like Grand Nationals and EA Nationals. But importantly dressage is our long term focus. I feel he has so much talent and will really shine at Prix St George and Grand Prix levels.

What would you trade him for?
Nothing. He is too unique. Can’t be replaced!

3 things about him we don’t know about W. Ellington?
1. His Dam, Dream Rubena was the highest scoring mare in her classification in the US.
2. Before being gelded he produced five young horses, two of which will start their competition careers with EBL later this year.
3. He hates travelling anywhere and is only happy if he is in the last bay of the truck so that he is the first to get off at the show. And he hates having a horse travelling next to him.