The final of New Zealand’s highest-ranked showjumping series is stacking up to be a real head-to-head amongst the nation’s best riders.

They’re in a nine-strong field who will line up to be challenged by course designer Gerrit Beker (Tauranga) at the Giltrap Audi World Cup Festival at Woodhill Sands in Auckland on Sunday. 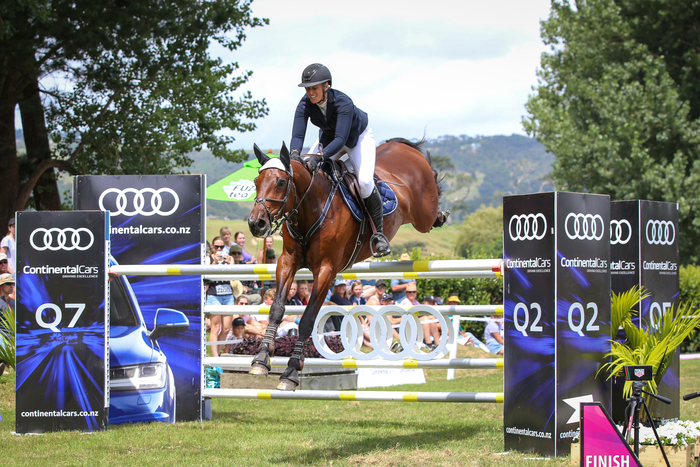 Tegan currently leads the series, with a 10-point buffer on Brooke with Annabel just a single point further back. The final offers points-and-a-half but it gets complicated as each of those top three will have drop scores having started in all the rounds with just the top four results to count.

Tegan will not be starting her superstar Windermere Cappuccino but instead will compete aboard eight-year-old Campari, who will be the youngest horse in the field. “It will be a big ask to expect an eight-year-old to go out and win a final like this in such a quality field, so we will just take it how it comes,” she says. “I am really pleased how he has stepped up to this level this season and am looking forward to consolidating that further next season. Our partnership continues to grow as he gains more experience.”

Brooke, who lines up on her two-time final winner LT Holst Andrea, also gives a nod to the talent in the field. “Anyone could win,” she says. “It is wide open. It will be good jumping up there. For me, the final is just another World Cup round, and you try to do the best you can on the day. Last season (when they won the final) is a long time ago now. You just have to jump what is there on the day.”

Eighteen-year-old Annabel is the only starter in the final with two mounts in her Aussie-import Carado GHP and German-import La Quinara – the latter who has won two World Cup rounds for her young rider this season.

“I am excited but also a little bit nervous,” says Annabel. “I would love to stay in the top three but this is my first full season at World Cup so I am pretty happy with it. I didn’t think I would do so well and really didn’t think I would have two wins. It is a tough series but one I enjoy a lot.”

The top-flight class will be held in the beautifully-appointed Giltrap Audi Grass Arena on Sunday around 2.30pm. It is the star class of the two day show, which will be livestreamed on Sky Sport Next via You Tube. Entry to the event is free but visitors will be encouraged to give a gold coin donation to the Breast Cancer Foundation.

The winner of the New Zealand league, which culminates with the final this weekend, usually has the chance to represent the nation at the Longines FEI World Cup Final which is scheduled to be held March 31-April 5, 2021, in Gothenburg Sweden, but with a global pandemic whether it goes ahead or not is uncertain.