Home > News & Stories > Tribute to a champion - Every Kid's Dream

Tribute to a champion - Every Kid's Dream 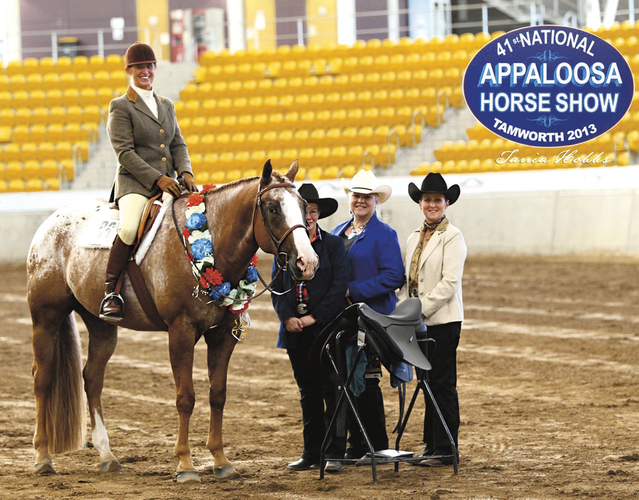 There has never been a horse in this feature that has lived up to his name more than Tex.

He might not have been a kid’s horse, but the Appaloosa gelding was certainly a dream horse for Western enthusiast, Anne Edwards from Mansfield in Victoria. Every Kid’s Dream was bred in Queensland by Sam Daley and was foaled in 2004. He is by the imported Quarter Horse stallion, Kid Cross out of the Appaloosa mare, Southern Cute Dreams (exp NZ) by Mega Dream (imp). He was purchased sight unseen and he and Anne went on to have a dream career together. This is Tex’s tribute.

“Tex was originally shown at halter by Kyley Norman in Queensland and she put him up for sale as a very green three year old,” explains Anne. “I bought him sight unseen, just on photos, a video and his breeding, so it was a bit of a gamble and I’m not a gambler and not so much in to buying horses. I think every horse I have ever had is still here or buried here. I did not pay a lot of money for him and I just thought I would give it a go.

“We got him in March 2008 and at the end of April we took him to the Appaloosa National Show. We only had a couple of months with him before we took him to the Nationals at Tamworth and he was amazing and took out nine National titles and the Open Feature Hunter Under Saddle was one of them. He lacked fine tuning and training, but he was just a natural, big moving horse. He wasn’t shown under saddle as a two year old and I think that helped him because he came out as a three year old really strong, sound, fit and healthy. He was shown a lot after that; we took him everywhere and he has never had a lame day and has been sound all his career. He is just so honest too and we have ended up with over 100 State and National titles.

“His specialty was Hunter Under Saddle and I rode him as well as my trainer, Raelene Gilboy, who has just been amazing and won many titles with Tex. The aim was that he was to be an Amateur horse for me and he certainly fulfilled that role. What was so good about Tex is that he displayed an all round Appaloosa talent; he went from Halter to Hunter Under Saddle and he even won a National title in Reining! He did everything; we had him over the jumps, he did Horsemanship, Showmanship and we had kids on him doing Lead Line. He won a Dressage 2.2 at the National show; he was just the most amazing all rounder. That is of course what the Appaloosa is meant to be. He was honest in the pen, he didn’t cheat and he really loved it.

“We took him to open Western shows as well like the NPHA and he won there several times, and the Halter Showcase that sadly no longer exists. He won there, he’s coloured and he still won. I know it just sounds like I am bragging, but he was such a successful horse. The highlight of our career together was the Champagne Western Pleasure at the Appaloosa Nationals in 2010.

They run it every year and it is open to all the trainers and horses of any age. I was very nervous about entering, but at the last minute I put in a late entry, as I thought it would be such a great class to be part of. We got through the heats and to our delight made it to the ten horse final. I did a nice run in the final, but I did not think it was anything special; I was just happy to be there with all the trainers and beautiful horses. When it came to prize giving, they counted down from ten. They called out tenth and it wasn’t me and I thought, oh great I’m not last. They counted down until there were just two of us left, a trainer I know and me. We held hands and he was called forward as second and I had won. Honestly it was the best day of my life and still is. I said to the two judges from the USA that I was just an amateur and amateurs don’t win classes like this! They said that he was just so consistent. Tex is not always the best moving horse in the class, but he is so consistent and such a worker. He just puts his head down and does the best he can do. Every time the judge would look at him, he would look the same, EVERY TIME. I did not have to touch him, he just did his job. And that has been the reason for all our success, which includes;
• Overall Appaloosa Performance Horse of Australia three times.
• English Performance Horse twice.
• Overall Performance Horse of Victoria six times.

I can just go on and on and he received the AAA Superior All Round Horse Award and there is no higher award for an Appaloosa in Australia. Tex also represented the Western Breeds at Equitana a few years back and that was a highlight.

“He will be 13 this year and I have recently retired him from Western competition. His last show was the 2015 State Championships and he took out four buckles. At the time I did not know I was going to retire him or I might have savoured the experience more. I decided to give him a year off, because I had a new horse I wanted to bring along and after that, I decided that Tex had just done enough; there were enough garlands and buckles. He is not performance bred, he has halter breeding, but he still excelled and was rewarded by the judges. He could go on competing, but what for? We might try something different with him, but he is finished in the Western arena. I have some young horses here and he is a great horse to pony off. I wrap the lead around the horn of the saddle and he will convince them to come with him and they very soon get the idea that travelling happily along beside him is the best thing to do. He has a lot of life left in him to do good things, but not in the pen. I will just trail ride him and enjoy him; I feel he has earned that. Tex doesn’t suffer fools; he is not an in your face sort of horse, he is quite aloof and is like ‘let me do my job and I will do it for you’.

“I want Tex in my paddock for another 15 years and I want him to be ponying those babies up and down the road for as long. He shares a paddock with a mob of roos that come up every night and life is good for him. Tex took me where I never thought I would ever go. He is the horse of a lifetime and there never will be another Tex." 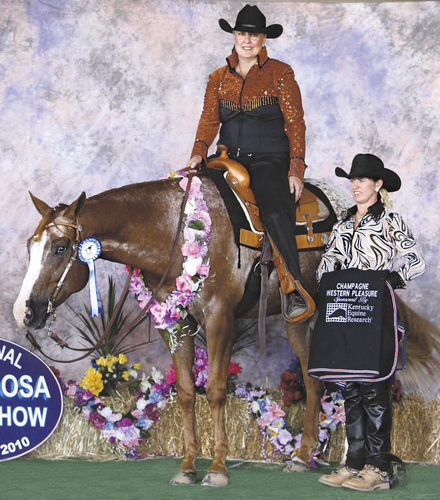