Tribute to a Champion - Jive Magic

Rozzie Ryan is known for her ablilty to create a wonderful partnership with any horse she rides, and none more so in the new millennium than her partnership with the charismatic stallion, Jive Magic. From the age of six weeks until he was 23, Rozzie worked with the breeding stallion, giving the dressage public frequent glimpses of what true dressage was all about; that degree of connection and training that only comes from a partnership that truly clicks. With all the talent required, Jive Magic was ear-marked early for international team selection, but luck was just not on his side and he died on the 23rd September 2019 with Rozzie by his side, as she had been for most of his 23 years. There is no doubt that he was a Champion, and this is his tribute. 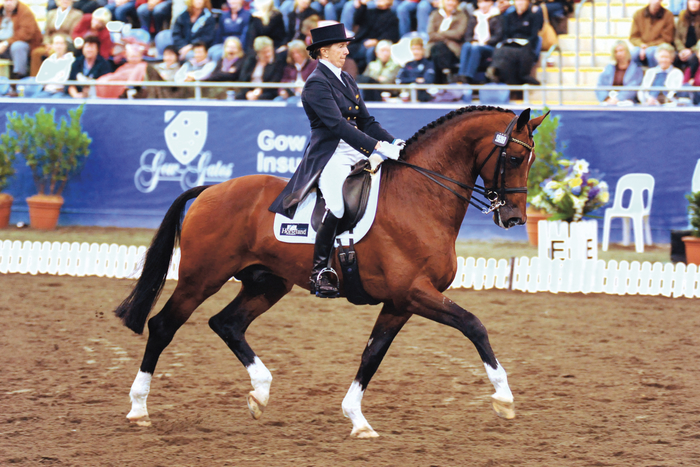 “In 1996 I was in Holland with Exellent and training with Tineke Bartels,” begins Rozzie. “She was riding Jazz that was just a youngster at the time and I said, I would like one of those, because I really liked Jazz. Tineke said I should talk to Jazz’s owner, Nico Witte. He took me around to see a few foals and I really liked Jive’s dam lines, (Fruhling, Aktion). I negotiated with Nico and at that stage the Jazz foals were all really new, and there is no way I could have bought another later on for the same price. I did not have a lot of money, but offered what I had and got him. To be honest, I was not looking to buy a foal, it was a purely economic decision, because I could not have afforded Jive at three or four. I knew the only way I could get a young horse, any young horse over there was to buy a foal. Jive and his mother were in a paddock with some cows, so I had no idea what his temperament was like. It was a complete gamble; I bought him on breeding basically; I wanted a Jazz and I could afford him. He was a tiny fella and just six weeks old when I bought him. (His dam was Kind of Magic, so we came up with Jive Magic).

“He stayed in Holland with Nico beyond being weaned and spent a winter there. At the time, I didn’t have the money to ship him home, so he went to my brother-in-law, Matt in England, as he had generously offered to take him. So both Jive and Regardez Moi, who is the same age, were at Matt’s and grew up in the paddock together. They were great buddies then, but hated one another when they were rival stallions. We went to see him at Matt’s when he was a two year old and he was pretty plain. Even my mother, who never says anything bad about anyone or anything, struggled to find something good to say about Jive. She would say to me; I saw your young horse today and he has a lovely expression! You could not even say he had a nice tail, because he always had a rotten tail. When Heath saw him he said; oh, God! I said, fine, let’s geld him, as I do not want a stallion, I want a gelding, a riding horse. No no, said Heath, let’s not be too hasty here. But I said, if I have to ride him and manage him and take him by myself in the float etc, he has to be good, or he gets gelded. But he was always really, really good. He was a beautiful horse and very gentle with humans; never a nipper, dominant or aggressive. But with other horses however, he was aggressive and that’s how he ended up hurting himself by kicking the stable walls, even though they were rubber lined. But for me and anyone else, he was a delightful horse to handle.

“I’m not really a Young Horse class sort of person, but he did one in Queensland and won it. I remember going into the presentation and with a baby horse, you don’t really know what their reaction will be and he was just as steady as a rock and I thought, this is nice. He was always like that actually, he was really good. I did a few Novice tests and he won a Novice Championship at Werribee and did a few Elementaries and Mediums, but he didn’t really travel around much until he was Prix St Georges.

“He was very powerful to ride and I don’t think I have ridden anything else that was so powerful. He was quite strong, but he became a beautiful horse to ride and he was a wonderful combination of self-motivation without too much adrenaline. If mistakes were made, they were genuine mistakes and not made from tension or excessive adrenaline. He was the first horse I had that found the passage and piaffe easy. At that stage, Harry Boldt was coming over to train us and I felt very honoured to be coached by him and he was really helpful with Jive. He was about five or six at the time and Harry said this is the time to start piaffe and Jive just picked it up amazingly quickly.

“Jive also had the ability to injure himself and just as we were thinking that the 2008 Olympics might be a possibility he injured his eye which required two operations and nine months off. He had a successful 2009 and won the Grand Prix at the Sydney CDI in 2010. That same year at the final Australian trial for the WEG in Kentucky, and Jive was a fancied contender, he did a really bad Grand Prix test. It was really sad, because I remember someone saying; oh, he let you down. But I never felt he let me down, and as I said to Heath at the time that Jive looked very unhappy in the stable and he never looked unhappy. There is definitely something wrong with him, as he never behaved like that. And that, I think was the beginning of the end.

“I took him to the vets at Randwick and they told me his injury takes a while to present and it would have been there for some time. That explained quite a lot. It was basically ringbone on his near hind, a bony change between his short and long pastern bones, possibly, probably a consequence of his kicking habit. After that, I struggled to keep him sound and I just thought, no, I would stop competing him, because I did not want to half do it, so I pulled the plug in 2011. He was not rideable, but he was fine and went out into his yard every day and enjoyed his stud duties.

“He was a gentleman of leisure here for eight years. He had never had any problems with tendons or ligaments or his four white feet, but he was always a bit injury prone and had a dramatic reaction to antibiotics and that in the end was what happened to him. He got a little cut from his kicking habit and got a chronic infection in it and when we gave him antibiotics, he would always have a reaction to them. I managed to get the infection and reaction under control and then I went away to Boneo with Jarrah and Adonie. The day after I left it had blown up again and he was really sore and it was really bad. They waited until I got home and when I did, his leg had blown up incredibly and our wonderful long term vet, Peter Tabak, who is so kind and gives the horses every opportunity, said, you are not really going to get him better from this. It was then we decided to put him down.

“It was very sad, but it was actually peaceful. Jive had a mouth full of carrots and he had all his friends around him. He wasn’t frightened, he was perfectly at ease. I actually said to somebody, maybe someday, someone will do this for me. We were all there with him and he was calm and peaceful. It was a terribly emotional event, but not a terrible event and certainly not a tragedy. Twenty three years is a long time to have a horse and I had built up a great connection with Jive over those years. He did not quite make an international team, but, really, how many do that? I feel a bit sad that he did not have that honour, but I don’t think he gave a damn about that. He had a nice and interesting life and there was always something going on here for him to attend to.”

Jive Magic will be well remembered through his many successful offspring in both the dressage and showing arenas. 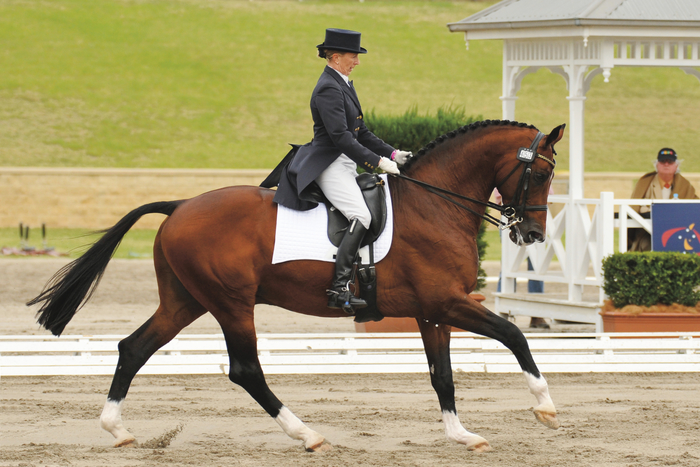