Victories for Ijsbrand and Boyd

Legends Ijsbrand Chardon and Boyd Exell both won events in a busy weekend in the FEI Driving World Cup™...

It was an exciting weekend in FEI Driving World Cup™ action with not one but two events at Budapest and Stockholm.

Legs 4 and 5 of nine saw some of the world’s best four-in-hands Driving teams gathered to see who will qualify to advance to the Finals in Bordeaux next February.

At Budapest on Sunday, Dutch Driving legend Ijsbrand Chardon beat his son Bram Chardon, defending FEI Driving World Cup™ champion, by just two tenths of a second in a thrilling drive off. Third place went to local favourite József Doborovitz of Hungary, who has been a force in the increasing popularity of Driving there.

Saturday’s competition at Stockholm put eight-time World Cup champion Boyd Exell of Australia on the top of the podium for the fourth time in as many events this season. Former World Cup champion Koos De Ronde of the Netherlands took the silver medal, and the bronze went to Glenn Geerts of Belgium.

Fans in the Hungarian capital were treated to two father-son rivalries on Sunday.

In addition to the Chardons, the Dobrovitz family also had two Driving teams in the competition, with József Doborovitz Jr. giving his father good chase in Round 1.

After the first seven teams had their turn around the course, which featured two sets of marathon obstacles and a bridge, only three made it through to the drive off.

Up first, the senior Dobrovitz had the crowd cheering and clapping as he negotiated the tricky indoor track. His time of 138.49 was five seconds faster than his first round, but with 4 penalty points for a ball down, he finished on 142.49 seconds and would have to wait to see where that put him.

Ijsbrand Chardon was up next, his 58 years and dozens of titles showing what experience brings to the ring. Unlike the first round, he went clear this time, finishing in 134.11 seconds. Would his son pip him?

Sadly for the younger Chardon, who won the Budapest leg last year, he would have to give the honours to his father this time around. With a faster time of 130.11 seconds, he would have taken the victory, but a cone down added 4 points to his score for a total of 134.11 seconds and the silver medal.

Jérôme Voutaz of Switzerland finished fourth, followed by Chester Weber of the USA, Doborovitz Jr., and József Vida, also of Hungary. Vida, who by day runs a bank in Budapest, was inspired by the Dobrovitz dynasty and has been working with Dobrovitz Sr. to go from eager World Cup spectator to competitor in just a year! 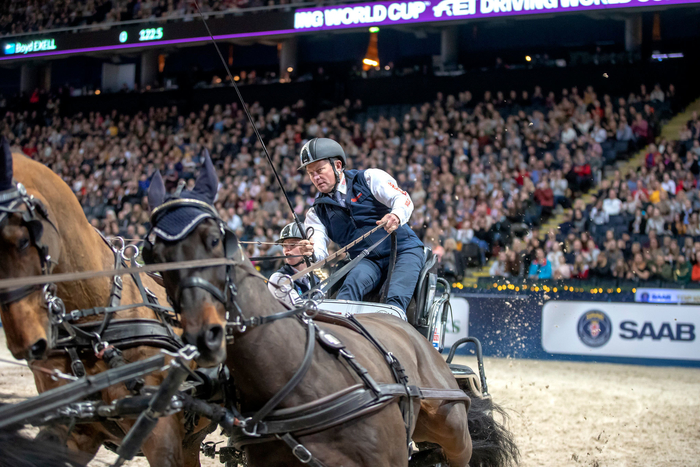 Competition in Sweden on Saturday was no less exhilarating. There, the course, festively decorated with Christmas trees, also included a speed box to test the precision of the Driving teams.

Koos De Ronde was brilliant in the second round, whipping through the last tight marathon section to finish clear in 140.30 seconds. Would it be enough for first?

Boyd Exell’s round demonstrated why he has so often been FEI Driving World Cup™ champion and stands at the top of the leaderboard so far this season. Finishing clear in 134.15 seconds, he topped his own first round time by four seconds for another win and a repeat of his Stockholm victory last year.

Mareike Harm of Germany took fourth place, with fifth going to Benjamin Aillaud of France and sixth to Fredrik Persson of Sweden.

Who will punch a ticket to Bordeaux in 2020?

The door is still wide open, with legs remaining in Geneva, London, Mechelen, and Leipzig. Follow all the FEI Driving World Cup™ fun on FEI TV!