Yorkshire donkey with overgrown and twisted hooves is rescued

A donkey, whose hooves were so overgrown they had twisted, is now on his journey to recovery, thanks to international animal welfare charity, The Donkey Sanctuary.

Following a call from a concerned member of the public in March 2021, Donkey Welfare Adviser Adele Crompton arrived at an address near Huddersfield in West Yorkshire, where she discovered the nine-year-old donkey called Puzzle, suffering with extremely overgrown hooves. 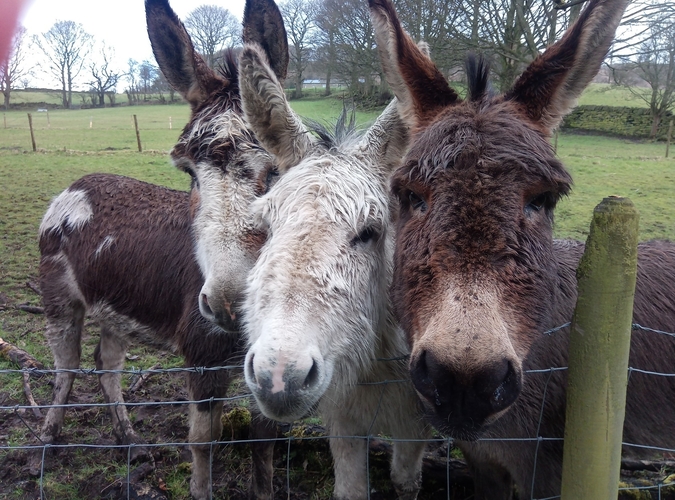 Puzzle, Wizard and Quiz at the time of rescue - Image - The Donkey Sanctuary LR

Puzzle lived with two other donkeys named Quiz and Wizard, who were also suffering from long overgrown hooves. They were living in a muddy paddock, surrounded by broken fencing and barbed wire.

The neglected donkeys were cold and wet due to the lack of adequate shelter, and the Donkey Welfare Adviser could see that they all need urgent veterinary and farriery care.

Adele Crompton said: “The first thing I noticed was the state of Puzzle’s feet. I could not believe how he was moving around with such overgrown and twisted hooves.

“They had grown so long, especially his hind feet. I noticed when he was moving, he was walking on the backs of his heels.

“Quiz and Wizard’s hooves were also in poor condition. Wizard had a big chunk of her hoof missing and the hoof looked deformed.

“Quiz’s front feet were starting to twist inwards, and he appeared to be in discomfort when standing.

“I knew we needed to intervene quickly to get the donkeys the pain relief and treatment they so desperately needed.”

It was clear that the donkeys, had been suffering for some time for their feet to be so overgrown and that all three needed urgent veterinary and farriery treatment.

Donkeys require regular farrier care to ensure their hooves are kept in good condition. They also need access to adequate shelter to protect them from the elements, as their coats are not water resistant, like those of horses.

Once Adele had assessed the health and welfare of each donkey from outside their paddock, she enlisted the help of the RSPCA to make contact with their owner.

The Covid-19 pandemic had affected the owner’s circumstances, and other priorities meant they had only been able to only provide the donkeys with food and water. It was agreed that it was in the best interest of the animals to relinquish them into the care of The Donkey Sanctuary.

The donkeys were transported to one of the charity’s holding bases, where they were provided with a warm, dry shelter, nutritious food and much-needed veterinary and farriery attention.

Adele Crompton said: “Despite all they had been through, two-year-olds Quiz and Wizard were still so trusting and friendly, whereas Puzzle was a little nervous.” 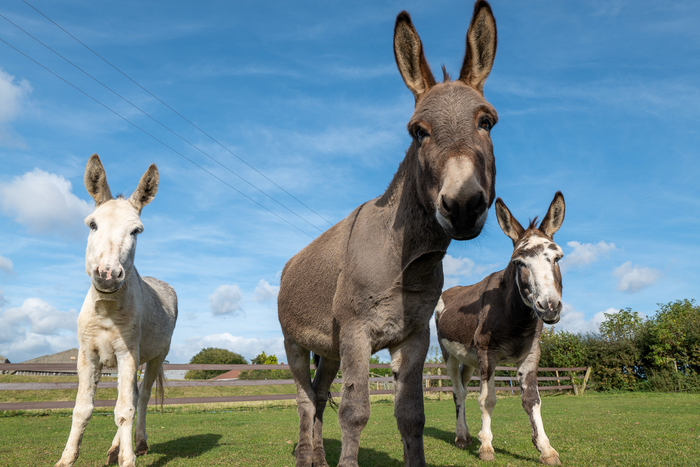 Wizard, Quiz and Puzzle on road to recovery - Image- The Donkey Sanctuary

“This case underlines the importance of seeking help as early as possible. This would have prevented the donkeys’ suffering and helped us be there to provide advice, promote the importance of good welfare and look into potential solutions.”

The charity has a team of Donkey Welfare Advisers across the country, who are on hand to provide free guidance to donkey owners and to support donkeys in critical need of help.

The donkeys’ condition has since improved, but it will be a long journey until they are fully recovered.

A spokesperson for the holding base said: “Puzzle, Quiz and Wizard are doing very well and have become interested in their surroundings and are keen to interact with people.

“Since their feet have undergone farriery treatment, their characters are really shining through. Quiz has a heart of gold and is very gentle and patient with the grooms.

“All three donkeys certainly seem happier in themselves, and their feet are looking in much better shape.

“However, they still have a long way to go. Puzzle’s and Quiz’s hooves were very deformed, so it will take time for them to fully recover.

“They are still building confidence around humans, but with a lot of love and care, we are hopeful they will start to trust us more and begin to enjoy life to the fullest.”

The three donkeys now have a safe home for life in the care of The Donkey Sanctuary, either in one of its sanctuaries or a private home through its Rehoming Scheme.