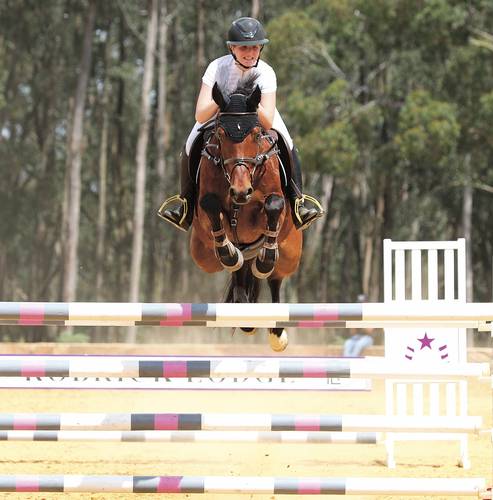 How would you best describe yourself? I think my personality is a mixture of being quiet and outgoing depending on the environment I am in.

Family history with horses? My family is not horsey at all! My family changed their whole lifestyle to accommodate my passion for horses. Dad is amazing with the horses and is my on-call groom. Mum on the other hand, is still a bit scared of horses. My older sister used to ride a lot when she was little but did barrel racing.

What age did you start riding? I was five when I first started riding but stopped when I was nine and got back into it.

Tell us about your first pony. My first pony was a very old rescue mare we called Anna. She was a sweetheart and lived the rest of her days out at our property.

What was your first competition and how did it go? I did lots of hack shows when I was very little so I don’t remember those ones. I did my first showjumping competition when I was about 11. It was at an agricultural show and I did the 60cm on my ex-polo pony Prince. From memory, it wasn’t very successful.

Why showjumping? I love the feeling of going clear and galloping through the finish flags knowing you gave 110% into the ride. Showjumping is never the same and every jump is different. It requires a certain level of letting go and not overthinking. No matter how nervous or stressed I am as soon as I canter into the ring I stop overthinking and enjoy the ride.

What are some of the highlights of your success?
• Being chosen as part of the NSW junior team and winning at Aus Champs.
• Winning both Boneo Classic World Cup and World Wetlands World Cup Juniors earlier this year on Diamont (Monty) back to back and getting Best Junior Rider over the two shows.
• Winning the 2019 Tamworth Junior Champion. 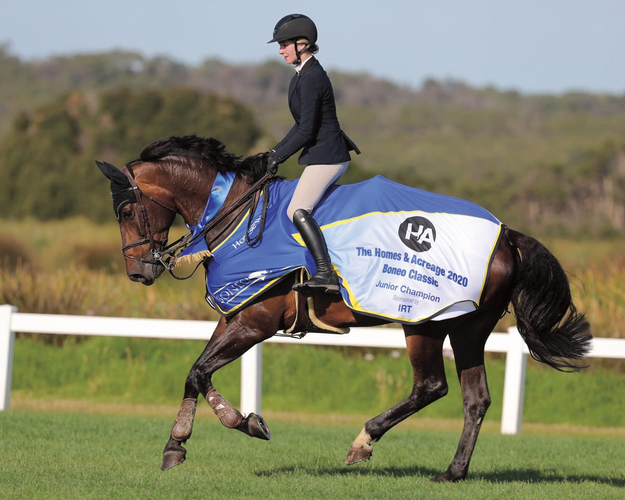 How did it feel winning your first Junior Championship? My first junior champion win was at Gatton World Cup last year on Diamont. I was the last one out in the jump off and came second in the first qualifier, so I was nervous to say the least. After going clear and fast in the jump off I got off Monty and the results were announced. I fell to the ground and cried! I never thought I was going to win and it made me want to keep winning. It meant a lot to me as I was putting in a lot of effort and not getting much out. It is one of my favourite wins still.

Can you tell us about your partnership with Monty? I’ve had Diamont for nearly two years so I think I know her well. She was my first very serious horse and I felt like I had big shoes to fill as Tom McDermott was jumping World Cups on her. Monty is a very nervous horse and needs a lot of reassurance. On top of that, she is a different horse in the ring, she knows her job and wants to go fast and clear. I had to learn how to ride her in a competition ring as well. It was difficult to ride her at first as she was used to a male rider and then went to a weak 15-year-old girl. We understand each other’s habits and she puts up with a lot on my end. Monty tries so much for me in the ring and wants to win as much as me. I think this is why we have such a good bond.

What is the secret to your success? I don’t think my method is different from anyone else’s. I worked very hard and sacrificed a lot to get to a level I’m proud of.

How did Quero Quero come into your life? I loved watching Quero when he was jumping World Cups and Young Riders with Erin (Buswell) and thought what an amazing little horse he is. I remember asking about Quero well before we were even looking for a horse, he wasn’t for sale so I gave up quickly on him. Earlier this year we were meant to go to Europe to look for a horse but with COVID our plans changed. We asked again about Quero and they agreed to let me have a sit on him. I rode a couple of horses that day and Quero was last. As soon as I sat and jumped around on him I knew he was the one. It was a perfect match of horse and rider. I’m very thankful to Tom for arranging everything as if it wasn’t for him, I wouldn’t have Quero.

How many horses do you have in work at the moment? I only have two competition horses in work, Quero Quero and Diamont. We have a couple of younger homebred horses on the property which I’m excited to ride in the future.

Do you have a current favourite? I can’t choose! Both are very reliable and have their own little quirks. It doesn’t change even if one wins or is going good, they both are very special.

Which horse has taught you the most as a rider and why? Monty and one of my old horses, Dora. Monty was very complicated to learn how to ride as she is so educated and has taught me how to properly do flatwork. We bought Dora as she was just stepping up to Mini Prix. She was still green so she taught me how to handle and educate a green horse. She also taught me how to jump some bigger fences.

Do you have any bad riding habits? I have a few! A major one is my reins slipping and causing them to get longer. It becomes a big problem in the ring when they get too long and the horses become hard to control. 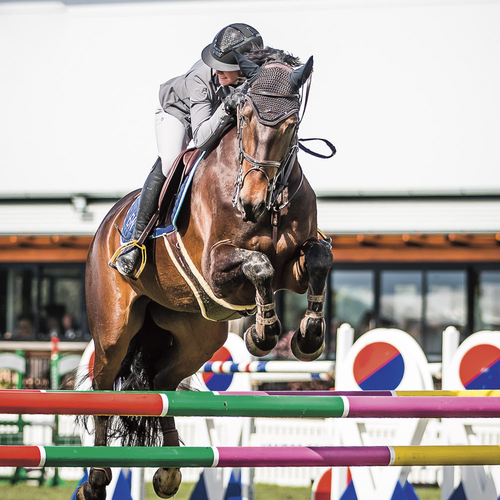 How do you juggle study and horses? It’s very stressful! My parents are very school-oriented so school comes before horses. I try to get most of my work done during school and at night so it fits in my schedule with riding. I’m also lucky that my family helps out a lot with the horses so it can all be done quickly and I can go back and study.

Share a typical day in your life. I get up at 6:30, get ready for school. Most days my dad lets the horses out of the stable and mucks out. He also feeds the other six horses. I get home around 3pm and rest for an hour then go ride. After riding both horses, I feed all the other horses and put Monty and Quero in their boxes for the night. I finish around 6pm and go back up to the house and study.

Who’s your idol? Internationally, Harrie Smolders and Darragh Kenny. Both are such classic riders and have a near perfect eye. Nationally Tom McDermott as he is an amazing jumper and taught me how to jump. Jess Stones also as she has an amazing position and is an overall great role model.

Who is your coach and what are their best words of advice for you? I train at J & R Equestrian and Jess Stones coaches me. Jess and the whole team are very encouraging so I often hear “don’t give up”. It sounds very simple but it’s something everyone needs to hear. “Stabilise your lower leg” is a close second!

How do you manage the highs and lows of the sport? It’s such a mental sport and the lows can really impact how you ride. Whenever I’m on a low I try to remember a high isn’t too far away. It’s also important to remember when you’re going well to keep yourself grounded as being overconfident isn’t always a good thing.

What are your future plans? I want to continue riding at a competitive level. Also, go to university and do a semester abroad.

What do you like to do outside of horses? I love relaxing so I watch TV, movies and go out with friends.

What is your advice for young up and coming riders? Don’t compare yourself to others! Be happy for everyone’s success and yours will come.

Can’t live without? My dad! He is the best groom and is always helping.

3 things we don’t know about Lucy Locke?
1. I’m learning Korean.
2. I played Rapunzel in a musical.
3. I love reading. I’m always reading three books at once. 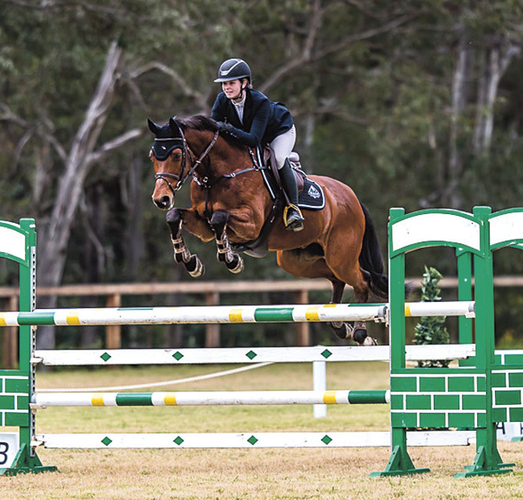