A jumping lesson with Rory Hovell 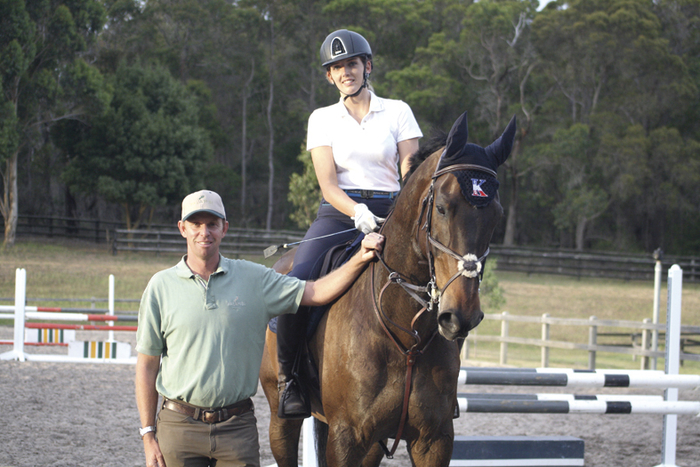 The Coach: Rory Hovell is the Stud Manager of the successful Yalambi Stud in WA. He is also an international jumping competitor and trainer. He was selected for the Australian Elite Jumping Squad for Normandy WEG 2014 and was shortlisted for the 2004 Athens Olympics. He enjoys coaching horses and riders of all levels.

The Student: Paige Dallywater and her horse Yalambi’s Olympick. “Rory has been giving me guidance in my riding for a year and a half now,” explains Paige “and I have grown from jumping 50/60cm to starting 110cm tracks. He has taught me that the adjustability, balance and straightness of a horse is so important in any training. In this lesson I wanted to work on finding better distances, getting a better canter and riding a better line to the fence.”

“My big thing in seeing Paige ride, both in lessons and competition,” explains Rory, “is that I want to work on her maintaining a strong balanced position, and then really ‘riding’ her horse much more around the course and especially in between the jumps. Not just being a passenger on a speeding train or in Olympick’s case a cargo ship drifting unguided towards port!

“I come from the more simple American equitation approach. Get the riders and horses in a good balance, maintain an even rhythm and ride a nice straight approach to the fence as this normally fixes most issues.

“Paige tends to take all the weight through her seat,” explains Rory, “pivoting around her knee, which in turn causes her lower leg to come off and swing. I want her to support herself more through her lower leg with a deep giving heel, and really use her abdominal muscles to keep her body upright and in line. When I asked her to stand up in her stirrups, she would either fall backwards or forwards and grip in with her knees, which in turn takes her lower leg away from the horse. We spent a lot of time getting Paige to stand up in the stirrups, relax her knee, and allow her heel to come down, then sit down and again stand up. What also helped was to get her to stand up a bit taller, try to relax her shoulders down, as she would hold a lot of tension through her shoulders and neck. Also keeping herself straighter in her body and not twisting to the inside. 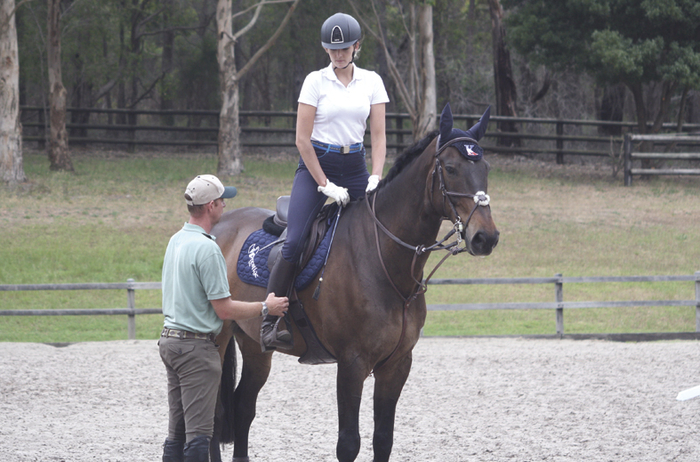 Paige stands up in her stirrups and works on relaxing her knee off the saddle and pushing all her weight into her heels.

“Before we can actually ask a horse to do anything, we first of all have to be able to sit on top of them in perfect independent balance and do nothing.

“Olympick is a horse that finds it hard to stay connected from back to front and maintain an even contact. In this way he is very quick to drop behind the rider, his hind legs don’t then stay underneath him and we then lose the quality of the pace and therefore his adjustability. So together with working with Paige’s independent balance we also worked on Olympick in the walk, trot and canter, trying to maintain the same line, whether it be on the straight or the circle, keeping him in the same rhythm, and then getting Paige to bend Olympick left or right, which then went on to turning him to the left or right. This was to make sure that Olympick was always balanced on his own four legs. When Paige started to do this exercise, Olympick would slow his rhythm and then drift off the line as Paige tried to change the bend. This is really important when we are riding a course, as the horses have to maintain a very good quality of stride and balance, especially through the turn on the way to a jump. 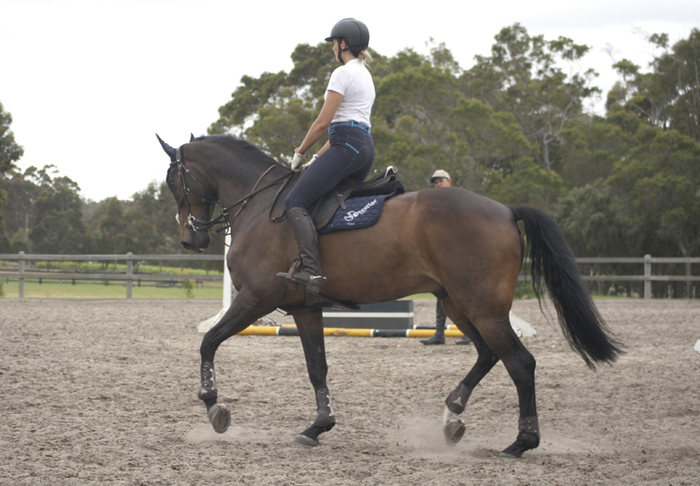 “Once Paige felt like she could keep Olympick balanced and supple on the line that she was riding, we then worked on being able to lengthen and shorten the stride. Again making sure that the line, rhythm and balance didn’t change through the transitions. With Olympick he tends to worry when asked to change in any way. So the answer was to just keep asking and repeating the exercise. This repetition helped to ease his worry out and to keep Olympick much more on the aids.

Adjusting the stride over poles

“We started cantering over 2 rails on the ground which were placed a fair way apart on a straight line. Paige was to approach them off the left rein and to count how many strides she did between the rails. I asked her to come in a 2 point position (i.e. standing up in the stirrups). Initially Paige came to the rails in a very unconnected, weak canter, letting Olympick drift out through the left turn, which resulted in Paige having to pull to a very tight distance at the first pole where she also slammed her seat down into the saddle and then riding a tight 8 strides to the second pole.

I suggested next time around she allow more canter to happen, and make sure that she could bend Olympick a little to the outside or inside all the way through the turn to help keep him straighter and more balanced on the line to the pole. This then resulted in a very comfortable distance to the pole and a nice 7 strides to the 2nd pole. As Olympick was more balanced, straighter and therefore more adjustable, Paige was also able to be stiller in her position and could maintain her 2 point position right through the exercise.
We did this exercise on both the left and right rein and also played with the amount of strides in between the poles. So in order to do the 8 strides, Paige came with a slightly more collected canter that was again balanced and straight, right the way through the turn, and it became very easy to do either 7 or 8 strides.

“If riders can deliver their horses to a pole in perfect balance and distance every time then no fence will ever cause them a problem.”

I like to use poles on the ground to teach riders about the importance of an adjustable canter, riding a good turn and taking a straight approach to a fence without the added pressure of a jump. Horses also don’t really see a pole on the ground so they don’t help us like they would when approaching a spookier jump. A jump will cause the horses to look and pay attention to where they are going. Riders can jump poles every day without over jumping the horses or getting them into trouble. If riders can deliver their horses to a pole in perfect balance and distance everytime, then no fence will ever cause them a problem. The rest is the horse’s job! 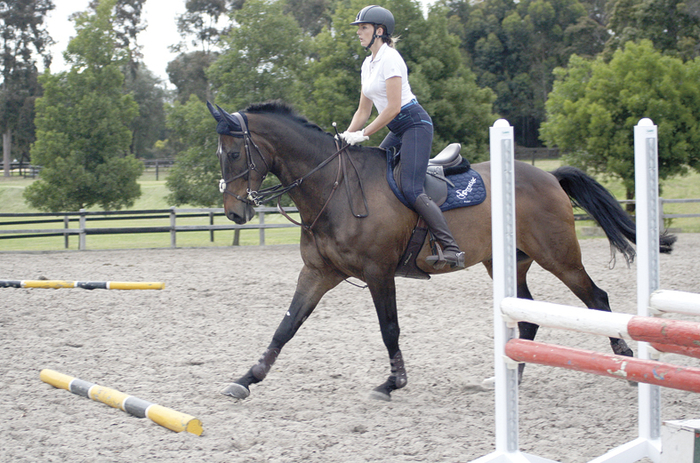 Paige maintains her 2 point position as she canters to the pole.

“We then moved onto jumping single fences. I asked Paige to ride it exactly the same way as she did the poles, staying out of the saddle and keeping a nice balanced straight canter. She made a similar mistake of cutting the turn with not enough canter and jamming her seat down in the saddle before the fence to make the distance work. Paige threw her upper body forward over the fence. The first fence was a simple cross pole. It does seem that when you put even a small fence suddenly in someone’s way, all their flat work seems to go out the window and the aim suddenly becomes ‘stay in between the flags and just get to the other side of the jump no matter what the cost!’

“We tried it again in a more relaxed thoughtful way as we had in fact made it safely over the first time successfully. This time with a better canter and straighter approach, which resulted in a better distance, however Paige collapsed in her upper body again at the fence. We kept working on her upper body position throughout the lesson. I find what helps with a collapsing upper body is getting riders (once they have found their distance) to put their eyes up to something in the distance, behind the fence, whether it be a tree, sprinkler, post or the next jump. With their eyes up it seems to help keep their focus and body upwards and forwards, rather than looking down and anticipating the jump. This is also very useful in keeping the horse straight in the air and also on landing, as well as finding their distance quicker to the next fence.”

“Once we had mastered some individual fences, we put more fences together in a course. The jumps were only 1m in height but I wanted Paige to work on her position and always keeping Olympick in a good balance, straight, supple and with an adjustable canter.

“The reason the top riders are so good in my opinion, is that they always keep their horses in such good balance with powerful connected canters, and that they are able to jump a fence out of every canter stride they take. This is what we worked on with Paige. On landing after every fence and especially on her way to the next jump, I wanted her to feel that she could bend Olympick to the left or right while staying on the same line, that she could speed up or slow down, and also lengthen or shorten his stride. Could she adjust Olympick now, or now, or now? Secondly, could she do this while staying out of the saddle? Most riders when they are in a 2 point position find it hard to just stay in that position, let alone actually ride the horse while being there. A sensitive horse like Olympick, sometimes prefers to travel with us off their back. We have to be able to ride them in this position and not just be carried along as a passenger. You need to be able to really ride with an independent seat, so the horse responds immediately to aids from our legs, upper bodies and hands, not just off our seat. 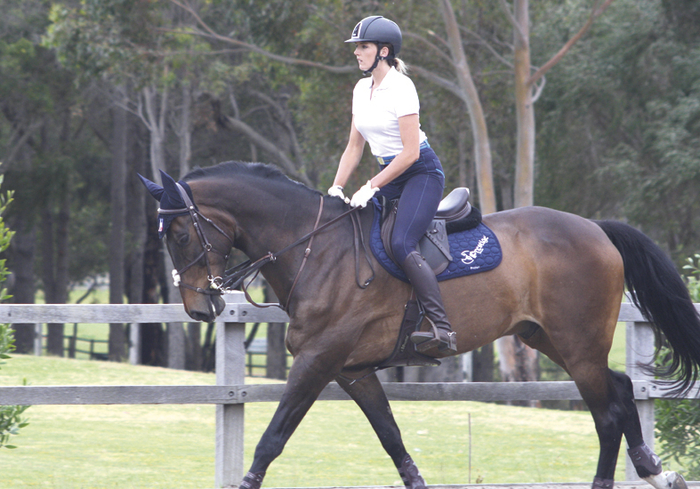 On landing after every fence and especially on her way to the next jump, Paige was asked to play with the adjustable canter, and could she do this while staying out of the saddle?

“Once Paige became more in balance with Olympick, she allowed him to travel in a more relaxed canter. Once he was relaxed he was more willing and able to respond to Paige’s aids, which resulted in a better distance, as the canter stayed more the same, as well as straight and balanced. When Paige really concentrated on keeping her eyes up and forward, it resulted in her maintaining a better upper body position in the air as well!”

“We carried on to jumping combinations and lines,” explains Paige. “At first I would panic at the last minute and throw my upper body at the jump and push Olympick to jump when he still had a stride left. Rory told me just to work on getting that adjustable canter, by maintaining a straight approach and letting the distance come from the canter. I was so happy with the difference from where I started to where I finished today! I feel more confident about my distances and ability to maintain and create an adjustable canter. thanks to Rory.” 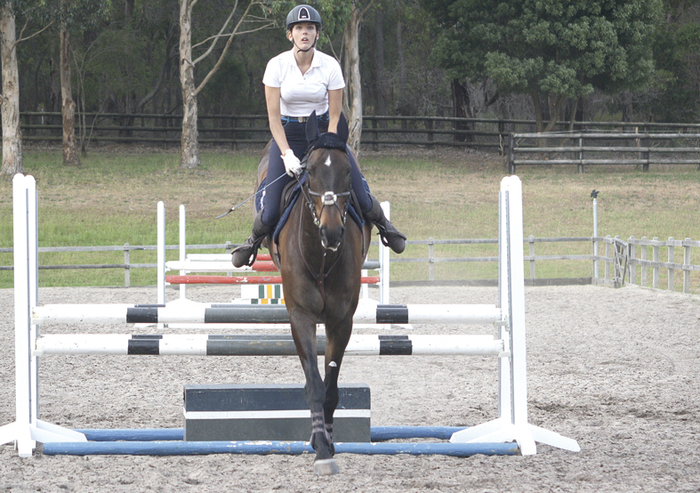