The birds were singing so loudly in the background that I though Lucia Montanarella was out in the countryside when I called her last week. She wasn’t though, she was in her apartment in the city of Lausanne, Switzerland where she has been based since being appointed Head of Media Operations by the International Olympic Committee (IOC) in January. Like so many others she was working from home that day.

The new IOC headquarters at Olympic House, described as one of the most sustainable buildings in the world, opened its doors a year ago to mark the 125th anniversary of the organisation that was founded on 24 June 1894 by Pierre Coubertin. Previously the 500 staff were spread across four different locations in Lausanne, but the new building has brought them all together under one roof. However only 30% of the staff are permitted to gather in the office on any given day at the moment due to pandemic restrictions.

I have called Lucia to talk about the career that has taken her from her early years in the world of equestrian sport to the very top of her chosen profession. I begin by asking how she is finding Swiss life? “For someone like me who enjoyed living in Brazil and comes from messy Rome it’s a big change. I’m the sort of person who gets intimidated when everything works, so I don’t fully enjoy all of this perfection all around me, although the lifestyle is brilliant!”, she says with a laugh. “Switzerland came out as the number one country through this pandemic and the reality is we’ve been very privileged, we’ve never been contained”, she explains. 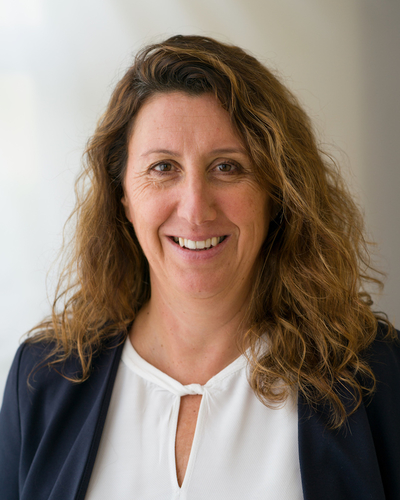 We reflect on the fact that her daughter, Agnese, is now a teenager and that her son, Pietro, was only a four-week-old baby when we both worked at the FEI European Eventing Championships at Burghley (GBR) in 1997 where she was Press Officer. He has just graduated from his Masters in Management at the London School of Economics this summer. The years pass so very quickly…..

Lucia’s equestrian credentials go all the way back to her childhood on the family farm in the north of Rome. Her parents, who first met at the Socieda Hippica Romana, a riding centre near the Olympic Stadium in the heart of the city, bought a property close to the farm owned by the family of Italy’s most famous equestrian press manager, Caterina Vagnozzi of Equi Equipe, and that would prove pivotal in many ways.

Lucia’s father bred horses, and she rode the young ones and competed in Eventing at Junior and Young Rider level. “When I was at University, Caterina invited me to help her in her office. I was just 17 and it really all started from there. I always had a passion for writing, I was obsessed with it from when I was very little. When other children were playing with dolls I was asking for a typewriter”, she says.

She went on to write for a number of equestrian publications along with Rome’s daily newspaper, “Il Tempo”, and also did some radio reporting. “Being an equestrian journalist is a tough job and it was a tough job in those days as well”, she recalls. That led to a position with the Italian Equestrian Federation (FISE) which in turn led to her being appointed Press Officer for a number of events.

“I was Press Officer in Pratoni for the World Equestrian Games (the third WEG, staged in Rome in 1998) and then for a few of the Italian legs of the FEI Jumping World Cup including Verona, and the Final of the World Cup series in Milan. I was also hired by Simon Brooks-Ward for a few years, so I worked at Olympia and Royal Windsor and Burghley and some shows in Spain including Oviedo and Seville”, she says.

Her link with the Olympic Games began when the FEI recommended her as Equestrian Press Manager to SOCOG, the Organising Committee for the Sydney 2000 summer Olympic Games. “I moved to Sydney for a few months with Pietro who was only three at the time, and when I came back I was hired as Director of Communications for the WEG in Jerez (ESP in 2002). Then, a bit out of the blue, in January 2003 I was contacted by the Organising Committee of the Torino Games (Winter Olympics 2006),” she explains.

She laughs now when she recalls her first telephone call in response to the approach from Torino. “I said I didn’t like winter sport, I wasn’t a Juventus fan, I didn’t want to move to Torino and that I was wasn’t really interested! But still they called me back and at the same time my partner Flaminio, who is now my husband, was living in the North of Italy so it was a way for me to be closer to where he lives. So in the end I went for the interview and I was hired!”, she says.

Looking back, Lucia believes she owes a great deal to the experience gained during her time in various roles in the world of equestrian sport. “Torino was a big jump into a different environment, but no matter what area of sport you work in the job is much the same. Whether it’s grabbing someone at Badminton and bringing them to the press conference or doing the same thing at the Olympic Games, there is one goal - to make sure the media gets the stories. The good practices of media services in equestrian sport taught me a lot”.

She made history at the Vancouver Winter Olympics in 2010 when appointed the first-ever female Press Chief in the 114-year history of the Olympic Games, and the first-ever “foreigner” to take up that position. She found herself in a dilemma however, because the day after she was offered the job she discovered she was pregnant with her daughter. She offered to step back in the circumstances but VANOG didn’t blink, encouraging her to travel to Vancouver and take it from there. It was a really big move further up that Olympic ladder.

She says that making that piece of history made her very proud, but that she was “scared to death about the job and then I didn’t know how I was going to manage with this baby that would be born - but it all worked out well!”

Clearly Lucia’s determination to make things work, under any circumstances, is pretty unique. “I was hired by a woman, and her boss was totally against me. He said oh, she (Lucia) will never come back from Italy after she has the baby and she will let you down, but somehow she managed to keep me there”.

While she was in Vancouver, Lucia was contacted by the Bid Committee for the Rio Games to consult with them on the bid for the media services, which she did. When they won the bid in 2009 Lucia found herself in a funny situation. “Chicago was also going for the Games and everyone in Vancouver wanted the US to win because it would be a good transition from Canada to the US. So the morning of the announcement I was the only one supporting Rio. And I remember at 10 o’cock in the morning I had to hide with my friend Cassie under the desk to celebrate, because I was the only one who was happy that Rio got it!”

When she returned from Vancouver, she became a consultant in Media Operations for the IOC and a mentor for the Young Reporters Programme. “Then I did the London (2012) Games, and just beforehand Rio 2016 offered me the same job I had in Vancouver as Head of Press Operations and we moved to Rio (BRA) with the kids in January 2013 and stayed there until December 2016”, she says.

I’m staggered that anyone can cope with such constant upheaval in their lives. “You just have to take it one day at a time!”, Lucia says. “If you look at it then it’s a huge thing, but if you don’t look at it and take one day at a time it’s easy. Although as I’m talking to you now it feels like I am talking about someone else, I can hardly believe I’ve done all this, but I have!”

While she was in Rio, the IOC decided to turn the Olympic News Service into the Olympic Information Service (OIS) and Lucia was appointed Editor in Chief of the new service which successfully operated during the PyeongChang Winter Games in 2018. “Then my predecessor, Anthony Edgar, decided he wanted to retire to Australia and I was offered the position of Head of Media at the IOC starting in January 2020”, Lucia explains.

So what about Tokyo 2020? “I have a big calendar in my kitchen showing all the travel for this year including Tokyo, and now it’s all erased! I don’t want to sound cynical about what has been happening around the world and still is - it’s such a tragedy. But it’s super-interesting to work on the re-planning of the Games because it’s a one-off, and it gives us the opportunity to really look in depth at prioritising what is really needed”, she points out.

"I can picture a lot of tears at the Olympic ceremony in Tokyo, because the opening of those Games will have such a strong meaning for all of us."

But with so much uncertainty can the Games really go ahead? “I can tell you from the inside that we are really working with our heads down, looking at all kinds of different ideas, like what if we have to limit the number of people in the Mixed Zone, how to manage access, what if you have to take out every other seat in the tribune, everything has an impact. It’s a huge piece of work as you can imagine, and also re-confirming and re-negotiating because all the contracts are gone out the window”. It is indeed a mind-boggling scenario, but apparently most media are sticking with the prospect of travelling in 2021 when the Games are scheduled to run from 23 July to 8 August, and the Paralympic Games from 25 August to 5 September.

“We’ve been conducting a few surveys and nobody is saying that they will cut numbers. However there will be only five months between the Closing Ceremony in Tokyo and the Opening Ceremony of the Beijing 2022 Winter Olympics, so we feel Beijing may be more affected from a media perspective. We are looking at introducing some tools that could help remote reporting, such as following press conferences online, but we are not yet convinced that we will have to introduce it for Tokyo. In the survey we conducted about offices in the Main Press Centre all of the companies that booked an office said they still want it” she points out.

Looking back, Lucia says “all my career has been life deciding for me rather than me deciding my life!”, but it’s been a very successful formula for her. Despite her absence from it for quite some time she has managed to maintain many of her contacts in the horse world, and she treasures that.

“Equestrian sport was the perfect springboard for me because it gave me confidence and great experience. When I’m at the Games I make sure to catch up with everyone I can. The equestrian part of my life was, and always will be, very important to me”, she concludes.