The 2019 Gold Buckle Campdraft can only be described as a roaring success. Saturday saw 4000 people come to Willinga Park in Bawley Point, NSW, to watch Australia’s finest campdrafters battle it out for the World Championship Gold Buckle and the $100,000 grand prize, the richest purse in campdraft history. Spectators were treated to three beautiful days of weather, fine food and great entertainment culminating in the hotly contested final.

As the final competition opened, the cattle were so tough that the first three competitors could only get a score for cut out. Kimberley Sammon was the first of the riders to complete the course, creating an electric atmosphere and proving that the cattle could be beat.

When the dust settled, the top of the leader board was extremely tight with the final coming down to the wire and only 1 point between the top four scoring riders. 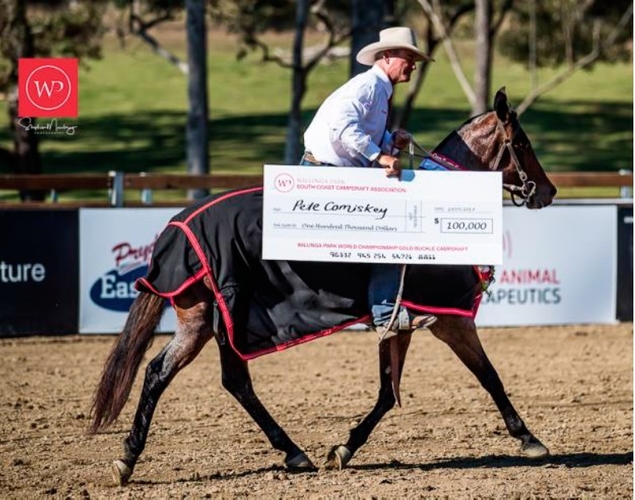 • Peter Comiskey, riding Brittany, all the way from Nebo in north Queensland, once again proved that he is Australia’s leading rider to secure the top prize and his second World Championship Gold Buckle, with a combined aggregate score of 178.67.
• Josh Barnett, riding Duckreygeous from Singleton, NSW, proved to the campdrafting world that he is a force to be reckoned with, finishing the final with 178.3, just 0.3 of a point behind Peter Comiskey.
• Hugh Miles also proved he is an elite competitor finishing in third place, riding Two Timing Chic.
• Kimberley Sammon, one of the most talented Australian women in campdrafting, not only broke through to have the first completed course, but she also hung on to that score and finished fourth on Juliette’s Romeo. She put on a brave face while more than 25 riders tried unsuccessfully to better her score.

"Willinga Park allowed the cream to rise to the top with some of the best cattle that we have seen in campdrafting. This year, the cattle made the riders work for their money. Out of 30 finalists, 60 per cent completed the course, and less than 5 points split our top ten riders. While it’s been a struggle for campdrafts around the country to get great cattle, Willinga Park’s competitors continually commented on the quality of cattle drafted for the year’s event."

“We are pleased so many riders came out to join us, and we were able to showcase the competition at Willinga Park on live free-to-air television,” says Terry Snow of Willinga Park. “Once again we achieved our goal of changing the way that equestrian sports are viewed in Australia and now campdrafting has an even more impressive reach.”

So after much success, the team is already planning the 2020 Willinga Park World Championship Gold Buckle Campdraft.

Willinga Park is a world-class equestrian centre set on 41 Hectares of the NSW South Coast.

Combining stunning architecture, sculptures, and a native botanical garden, it houses the latest in equine technology, has been home to numerous equine sporting events including the first-ever CDI 4* Dressage competition in the Southern Hemisphere. It has been used as a film set and for photo shoots. Its facilities include luxury stables, commercial cattle stud facilities and extensive facilities for the agistment and training of horses. Willinga Park also has Hereford cattle with some of the best breeding in the country. Each year, Willinga Park hosts several community-wide events and premier equine sporting competitions across dressage, showjumping and campdrafting. Willinga Park fully supports Australia’s athletes across equestrian disciplines and aims to fully support past and future Australian Olympians.