Ryan was the last rider to perform before a full house in SIEC's indoor arena tonight, scoring 72.955% to narrowly snatch the lead from New Zealand rider Wendi Williamson on Don Amour MH who had scored 72.565% just two riders earlier.

Accepting the winner's trophy, Ryan thanked all those involved in the event and said riders were lucky to have a facility like SIEC at which to compete. 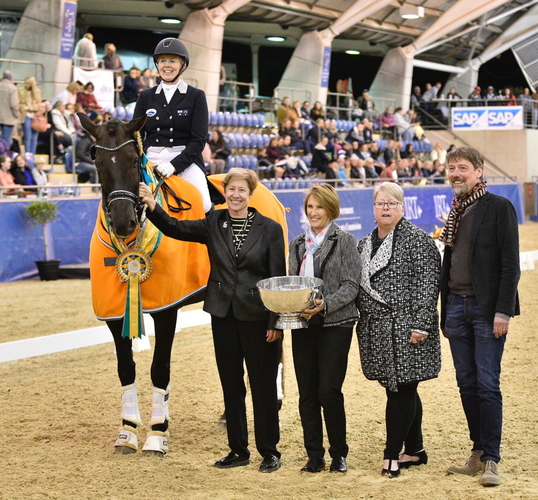 “We're so lucky to have this wonderful facility as a legacy left to us,” she said of the Sydney 2000 Olympic venue. “We love competing here.”

She also paid tribute to the New Zealand riders who had traveled to Sydney to compete at this year's Sydney CDI.

“It's been great to have them here and to have this opportunity to compete in this atmosphere,” Ryan said. “It's been a wonderful atmosphere, [and] a great audience.”

Winner of this year's John Lieutenant Memorial Trophy for the best three scores in the PSG, Inter I and Inter Freestyle was Brett Parbery and the Sir Donnerhall stallion Sky Diamond, owned by Terrance Snow.

The Kohnke's Own NSW Young Dressage Horse Championship was also decided in the indoor arena today, with the stand-out performance of this year's young horse crop being the six-year-old Bluefields Dankeschoen, ridden by Lisa Janke and owned by JJ Fuchs.

Judges Stephen Clarke (Great Britain), Mariette Sanders (Netherlands) and Susan Hoevenaars (Australia) awarded the impressive young Desperados stallion a 10 for walk in today's final, with New Zealand guest rider, Wendi Williamson, scoring him the highest of the eight horses she rode on the day at 9.5.

Bluefields Dankeschoen had been undefeated through the rounds at the Sydney CDI, and Williamson ranked him as among the best horses she had ever ridden.

“I would take him home in a heartbeat! He was just amazing to ride,” she said. “He was so electric, but so with you and really easy to balance.

“He was exceptional, really, probably the nicest horse I've ever ridden.

“[All the young horses] were all really rideable. I was pretty lucky, there was nothing that felt scary. They all felt really, really rideable, some exciting horses.” 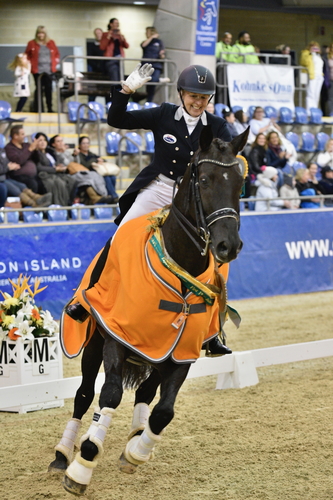 Bluefields Dankeschoen was also the first-ever horse to be awarded the new Amanda Shoobridge Young Horse Memorial Trophy Award for the horse or pony obtaining the highest two aggregate scores across two rounds.

The award is named in honour of well-known dressage rider, breeder and veterinarian Amanda Shoobridge, who passed away suddenly last year.

Young riders were also in the spotlight today, with Queensland squad rider Lucy Alati and CJP His Lordship performing a delightful test in the Flexible Fit FEI Junior Freestyle (CDI-J) to come out on top with an impressive score of 69.442%.

The 15-year-old – who comes from a horsey family and has been competing since the tender age of five - has owned “Hudson” for about three years, and said he warmed up very well prior to the morning's performance in the indoor arena.

“I was really happy with my freestyle,” she said. “He just flowed with the test and it was just perfect.

“I made the pattern up myself and then we tried a few different music people but we found Patchwork Equestrian, she was amazing. I loved it straight away.”

Lindsey Ware followed up her win in the Agnes Banks Equine Clinic FEI Young Rider team test on Thursday with victory in today's young rider freestyle with a super score of 73.835% on Aristede.

The combination's solid performances saw them also take out the Young Rider Award, sponsored by Longvue, for the highest two aggregate scores (team and individual) in the CDI-P, CDI-J and CDI-Y competitions.

Finally, Sally Rizzuto riding Diamond Star won the FEI CDI Amateur prize, open to riders from 26 years with no ranking on the FEI Dressage World Ranking list who obtained the highest percentage score in the FEI Prix St Georges and Intermediate I competitions.

Lucy Alati speaks about her win in the CDI-J Freestyle

Wendi Williamson speaks about riding this year's young horses, as well as her own success at this year's Sydney CDI.