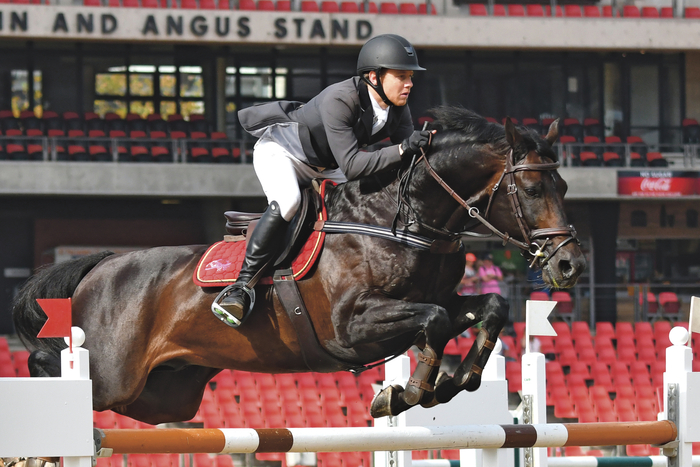 Aaron Hadlow and Easton at the 2018 Sydney Royal

If you thought of your ideal showjumper, your thoughts would stray no further than Twins Easton VDL. Beautiful, talented, willing temperament, he was even a great colour. Bred “in the purple” in Europe with the best modern jumping lines, Easton was on the cusp of becoming one of the best Grand Prix horses in the country under talented Dapto rider, Aaron Hadlow when tragedy struck.

This is his tribute.

In the first decade of the 21st century, the twins, Danielle and Greer Butcher were at the top of their game coming successfully through Junior and Young Rider ranks. The popular and competitive pair looked set to carve out a wonderful career for themselves in showjumping, but life intervened and their upward trajectory in the sport has been diverted for the time being.

In 2012 Danielle was selected as part of the Australian travelling squad with Twins Big Higgs vying for a place on the Team for the London Olympics. It was during this time that Danielle and her mother Matina Butcher found themselves at the KWPN Select Stallion Sale in Holland.

“I was travelling in Europe with Chris and Ros Hector and having a wonderful time,” begins Matina. “I was determined to buy a horse and when I got the catalogue, the only horse I was interested in was Easton. His pedigree was outstanding. He was by Indoctro, one of the world’s most successful jumping sires, out of one of the last Contender mares alive. He had Cor de la Bryere, one of the most influential sires in modern Warmblood breeding on both sides. When we saw him, he was magnificent; a beautiful conformation, a spectacular jump and a lovely attitude. You’re never going to get that horse, said Chris. We thought he had been sold to some Germans, so that was that. However, we heard that the deal was in discussion, so Danielle and I raced to his stable and after an inspection, bought him and we were thrilled.

“He was just three years old and we left him in Holland to be broken in and then brought him out to Australia in 2013. We sent him to Brett Parbery for some dressage training for about six months, then Greer started to ride him. When she developed some health issues, Danielle took over for a while, until she relinquished the ride. Andrew Inglis took over and he did a lot of work with him.

“Aaron Hadlow was a good friend of the girls, they had been through Juniors and Young Riders together and he always loved Easton and said that he would be thrilled to be able to ride him. So I gave him the ride and said I would never take the horse from him. Aaron loved Easton and really clicked with him. He put a lot of work into him and they were gathering some really good results. The journey with Easton was one of our biggest dreams and he was a beautiful horse. We got some semen from him before he was gelded and we have a mare by him. What happened was devastating and I am very disappointed for Aaron and us as well of course.”

“I started riding Easton for Twins Performance Horses at the end of 2016 or the beginning of 2017,” says Aaron, “and initially I would drive from Dapto to Pheasants Nest three times during the week and twice at weekends to ride him and I just fell in love with him. Then he would come to me to do a few shows and go back to Pheasants Nest. We later decided it would be better for the horse to stay with me. He was jumping 1.10m-1.15m when he came to me. He was the most wonderful horse to ride; he was very sensitive and very smart, so I started with a regime of stepping him up a class and then stepping him back down again and I did this to really establish his confidence and he just kept getting better and better. When he trusted me, we progressed really quickly.

“I didn’t over start him or over jump him, I concentrated on keeping him happy in the brain. He always watched the top rail and he was quick. If he jumped clear, he was very rarely out of the placings after the jump off. He was a one in a million horse and was confidently jumping 1.50m. He won two of the four Part 3 classes at Sydney in 2018, was fourth in the Mini Prix at the 2019 Australian Championships and won the 2019 NSW Indoor State Championship Grand Prix at Tamworth. He was rather a late developer and needed and deserved the time to mature and he was just so smart and so rideable. I was thinking that 2021 was going to be the start of his serious Grand Prix career.

“I was training at home in October. I had set up an exercise with a crossrail, two strides to a vertical, then one stride to an oxer. I had a placing rail at the three-quarter sides of the vertical rail. I had been through the exercise successfully about three times and on the fourth ride, something spooked him and he jumped sideways and came down on the placement rail. He damaged the collateral ligament in his foot and pastern and had a self-inflicted gash in the back of his pastern. He jumped the oxer on three legs and did not fall, I think because he was trying to save me. We called the vet immediately and after an agonizing consultation, we had to call Matina and tell her the vets gave us no option other than to euthanise him, as treatment and recovery were not an option.

“I have been struggling so much with culpability; If I didn’t jump him through the exercise, if I didn’t have the rails on the side? So many things go through my mind. I know it was a freak accident and I know it can happen, but it has broken my heart big time.” 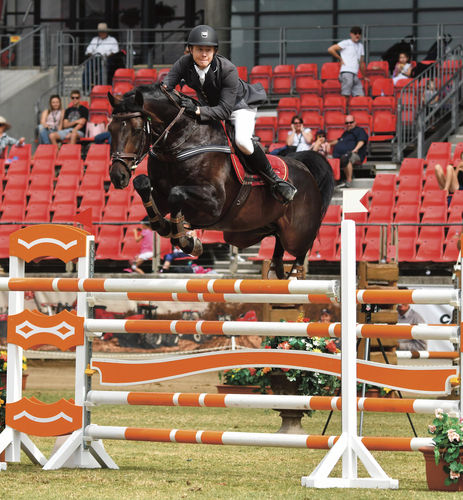 Aaron Hadlow and Easton at the 2018 Sydney Royal