The reality of being an equestrian in the vast land of Australia is that support isn’t always close by. I am sure we have readers around Australia that don’t have access to regular lessons or have to travel quite a distance to compete. This is the case to an extreme for Western Australian Jess Seiler, who gave up her life of equestrian convenience on the Sunshine Coast to live on a station in the Kimberley. But that won’t stop her from kicking her showing goals. 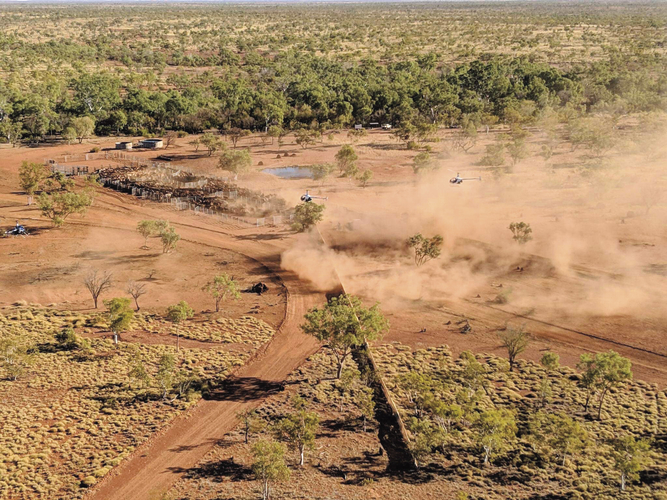 “My journey with horses began at a very young age in Grafton, New South Wales,” recounts Jess. “My parents leased me the hairiest aged pony they could find and said: If this horse is looked after, fed twice a day, rugged, groomed and ridden, then we will consider buying you one. That, I guess, was the start of my determination to never let my dream slip. Subsequently, I never missed a feed or a lesson and 12 months later my first, typically naughty pony was purchased for me. I think I fell off more than I stayed on some days, but I never gave up.

“I attended boarding school at New England Girls’ School (NEGS) with my horse in tow. It was here at the age of eight years that I started lessons with the late Vince Corvi. I hung on every word from Vince and never wanted to let him down. He was tough but always for the best, and I still keep his words in my head today each time I enter a competition ring.

“In 2006, I attended Gatton University studying a Bachelor of Equine Science while I also competed in eventing. From there I travelled to England to work in a para-equestrian yard and also got involved with fox-hunting, racehorses and steeplechasing. My passion for showing was always at the forefront though, and back in Australia I successfully competed at many ag shows, Brisbane Royal and the Police Games.

“In 2011, I met my now-husband, Rex, on the Sunshine Coast, Queensland. He was finishing his helicopter licence at the time and asked if I would like to go with him to a cattle station. Rex had a five-year flying plan and I had a great deal that I left behind in the Sunshine Coast; a beautiful show horse qualified for Sydney Royal, all my gear, float, arena, the lot.”

Nine years on and although that five-year flying plan should have been completed long ago, Jess and Rex still find themselves based in the outback…

“Where we are located now, Margaret River Station, is halfway between Halls Creek and Fitzroy Crossing in the Kimberley of Western Australia — about 1,400km to Darwin or 3,000km to Perth. We are part of the Yougawalla Pastoral Group where my husband and I look after eight cattle stations covering some 4,685,000 acres. It is harsh spinifex and sand with temperatures often sitting in the 40’s. These conditions do not seem ideal for a show horse, but after a seven-year hiatus, at the end of 2017 I decided to get back into it. I trucked a poor, unsuspecting galloway mare from Queensland to the Kimberley, some 4,000km. 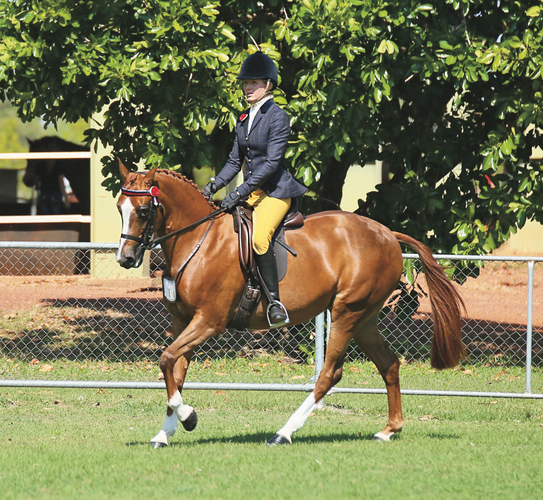 “Meeka was very well-bred by Shelley Penny; a beautiful chestnut galloway with all the bling, loads of success in the showring and best of all for me at the time, she had age. After having a child, as many riders would know, all my confidence went down the drain. What makes it tougher is that if I hurt myself, I am a very long way from any help. Meeka was purchased as my confidence builder to get back into it and that was exactly what she was.

“I’d found my perfect partner thanks to one very honest seller, but having a horse here is different. On the Sunshine Coast, my thoughts were always I’ll go to that clinic only ten minutes down the road, I’ll just grab a lesson next week, or I’ll just call the vet or farrier. Out here, my farrier is my husband, there are no instructors or clinics, no saddlery or local feed store. I order feeds months ahead to ensure delivery, which is extremely expensive. My vet flies his plane more than 500 kilometres one way to see me, and if something goes wrong, that is more than just a lame horse, then you have to know veterinarian help is often not an option. As for a place to ride, Rex and I used our station’s river sand and a tractor to build the only sand dressage arena from Kununurra to Port Hedland — a distance of over 1,600km. 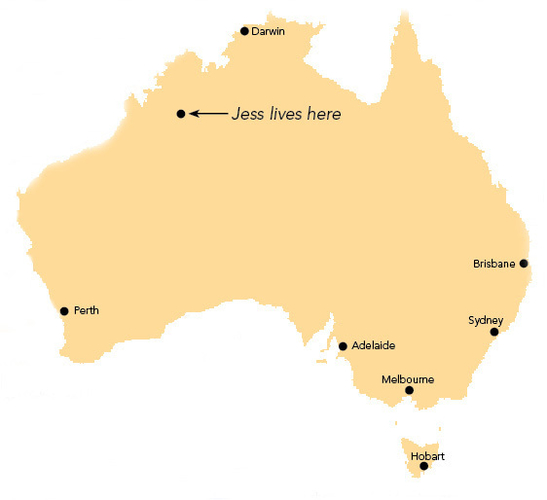 “Whilst the challenges involved in general horse care and pleasure riding in the outback are substantial, competition is a whole other level. Many competitors around Australia travel 1,000km or more to competitions, but picture travelling Brisbane to Melbourne for a lesson or ag show and then turning around and travelling home again. That was the amount of travelling Meeka and I did to attend a ‘wet season’ show in Darwin where we went from strength to strength.

“It wasn’t long before I decided I needed to get a young galloway, full of promise and aim for the top. I found a Lyndhurst mare called Lilly; young, green and never been out, but I liked her and purchased her sight unseen from New South Wales.

“Then I got thinking; how about I just enter EA HOTY and SHC HOTY in the NT and meet her in Darwin? Six weeks later while Lilly was making the great trip north to Darwin from NSW, I was making the trip from the Kimberley across to Darwin. Given our massive distances and competition season which lasts for four weeks, you just have to dive in headfirst.”

It sounds easy, right? A horse coming from one place, rider travelling from another, but the sacrifice is real for me to compete; the 3,000km plus trip would require three to four weeks off work, and with a toddler in tow who participates in School of the Air in the horse float while they camp in it… all for a horse that I hadn’t yet seen.

“Lilly arrived and was lovely, so her first-ever outing was Darwin Royal where she won the Riding Pony class, only a few days after our first ride together. The following weekend we competed at EA HOTY in Darwin and she won her Newcomer Galloway. She was qualified and ready to head South.

“I drove Lilly back to the station on a high, super excited of what was to come. Only three weeks after being home, Lilly cut herself across her rump to the point that her insides were hanging out. I was home alone on the station with my then two-year-old son. My husband was over an hour away in the helicopter and my nearest vet was away on the East Coast. We had no means of stitching, the infection was already in place, the wound was huge.

“After the success and highs of our wins, I had to put my beautiful mare down. It was this day that the realisation set in of just how easy it was for something to go wrong and how hard it is to rectify because of my location. 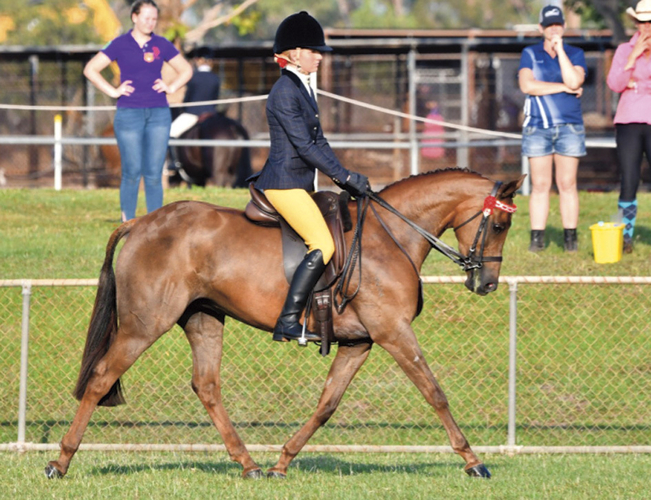 Lilly who Jess unfortunately had to personally put down on the station only 4 weeks after qualifying for Grand Nationals the first time. Photo: Julie Wilson

“I called Paul Austin the next day to give him the horrific news. Only four days later Mark Lilley rang me and said: it is probably too soon but there is a lovely galloway mare for sale who I think will suit you. I still laugh when I think back to Paul explaining her quiet nature while he was viewing her; he said there were kids, bikes and animals everywhere and he thought of me straight away.

“I took Paul and Mark’s advice and purchased Tyra (Westlake Top Secret) from New South Wales, sight unseen, and trucked her the 4,500km to Katherine, NT. I then drove the 2,000km round trip to collect her from the transport company
in Katherine.”

Having a rest stop somehwere on the side of the Great Northern Highway. 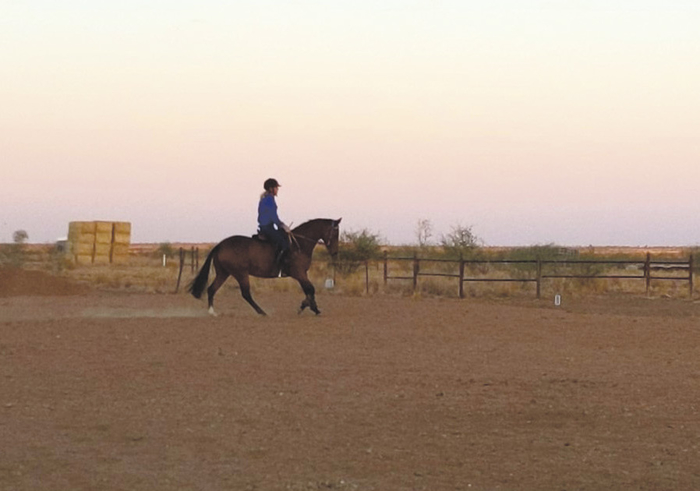 Working Tyra in the early hours at the station. Photo: Rex Seiler

This was in November 2018. Flash forward to 2020 and Tyra and Jess are preparing to compete at the Grand Nationals like no other; “My day starts at 4am where I set up my floodlight on generator power and work Tyra in the dark. I start work at about 5am, or earlier if needed, and my day consists of anything from mustering, drafting, loading-trucks or fixing bores. Tyra is often used to muster under a helicopter or walk weaners, all the while kept in peak show condition, under lights, with supplements mailed in and rugged from head to toe. It’s quite the sight to see in such a harsh environment, surrounded by old station horses and station folk who wonder why I have a rugged horse. 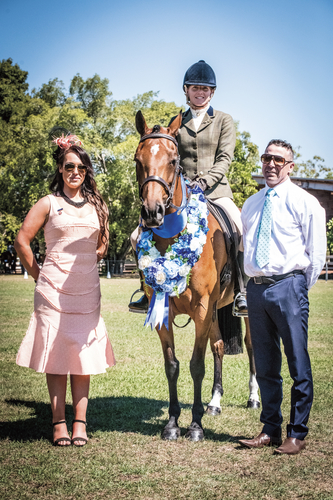 From remote station mare to show hunter - The beautiful Tyra who is now heading from the Kimberley to Grand Nationals in 2020. Photo: Valley Photography NT

“After taking another four weeks away from the station in June 2019 to travel to Darwin, Tyra is qualified for the Grand Nationals with wins at both the ENT HOTY and SHC HOTY. Rex, my son, Tyra and I will be making the 10,000km round trip to Sydney for Grand Nationals with everything crossed to represent the North in the best way possible. Most show horses at this level would be prepped in some pretty impressive facilities and conditions, but Tyra has been prepped in one of the most remote places in Australia, on rocks and spinifex.

“I’ll be based in Brisbane a month before, filling my time with as many lessons and competitions as possible. I want to enjoy every part of the journey and learn all I can along the way. It would be great to make top ten at Grand Nationals — but win or lose I’m just so excited to have done what no one else before me has done.

“I reflect now on my mindset when I was on the Sunshine Coast; I had access to everything imaginable at my fingertips; lessons, clinics and competitions every weekend. I took it all for granted and I never thought I’d get to the Grand Nationals. It seemed too hard, but what it comes down to is that where there is a will, there is a way. No matter where you live, or how limited your resources are, it’s possible to achieve your goals. If it’s something you want badly enough, it will happen and you won’t take no for an answer.” 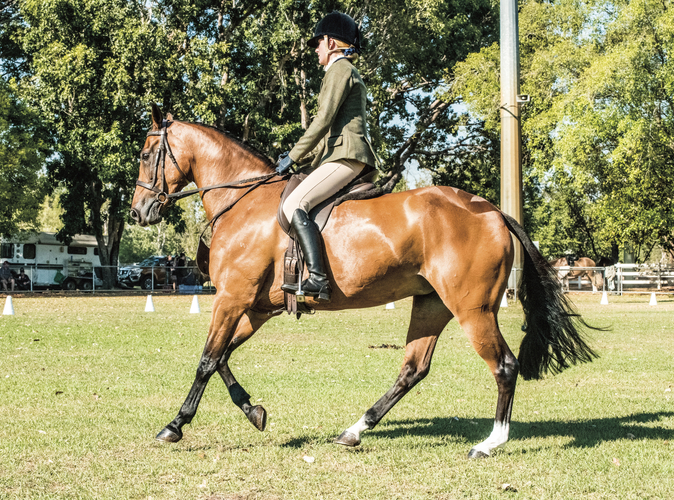 From remote station mare to show hunter - The beautiful Tyra who is now heading from the Kimberley to Grand Nationals in 2020. Photo: Valley Photography NT