Home > News & Stories > Another Win for Exell at Stuttgart

Another Win for Exell at Stuttgart

Boyd Exell of Australia won the FEI Driving World Cup™ event at Stuttgart on Saturday, taking the gold at the German Masters for the second year in a row...

This makes the third win this season for the eight-time World Cup champion and his team of Emma Olsen and Hugh Scott-Barrett.

Second place in Stuttgart was awarded to Chester Weber of the United States, who has been US champion 16 times and was eager to finish on the podium at an indoor World Cup Event.

Mareike Harm of Germany, who trains with Exell, thrilled the home crowd when she took third place, driving on a wild card that landed her in the drive off for Leg 3 of 9 this season.

Heading into Saturday’s event, Exell was at the top of the overall rankings on 20 points, having won both the Lyon and Maastricht legs...

After Day 1 of competition on Friday, the lightning-fast Exell was again in the lead at Stuttgart, despite having racked up 12 penalty points. Ijsbrand Chardon was eliminated after going off course, which left six teams to vie for points to qualify for the FEI Driving World Cup™ Finals in Bordeaux next February. 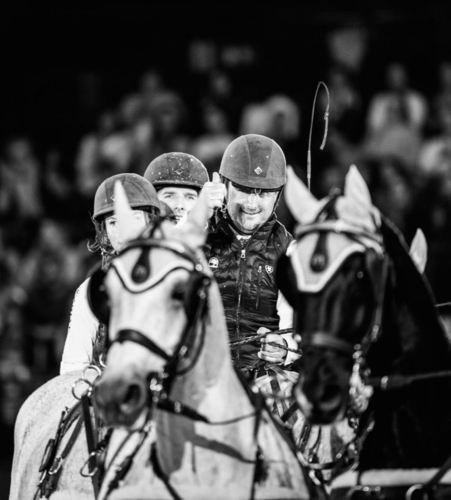 Driving fans at the Hanns-Martin-Schleyer-Halle were in a festive mood, clapping and enjoying the music in the arena as teams lined up to have their turn around the challenging course set by Hungarian Gabor Fintha.

Whilst this track also contained a bridge like the last two Driving events on the circuit, Fintha’s course included a tricky speed box and a carriage wash water element that got the better of several teams.

After the first round, the three fastest went through to the drive off, and it came down to Exell, Harm, and Weber to see who would be victorious.

Up first, Harm showed a cool head and brilliant handling of her four horses, finishing the course in 152.80 seconds, with no penalty points--the first clear of the entire event.

Chester Weber was up next, excited to be in the drive off after just missing the podium at Stuttgart last year. The American champion has taken the last few years to build up a team of indoor horses specifically for the World Cup and has been training with Ijsbrand Chardon to get an edge this year.

Alas, Weber would have to settle for silver, once Boyd Exell had his turn around the course...

Flying through the arena with no mishaps, the Australian and his team crossed the beam in an amazing time of 135.19 seconds for yet another series win, six seconds faster than Weber.

Benjamin Aillaud of France finished in fourth place, with fifth place going to József Dobrovitz of Hungary, and sixth to Glenn Geerts of Belgium.

Saturday’s victory for Exell gives him a commanding margin in the standings, as he is now on 30 points. Dobrovitz is second in the season rankings on 8 points, having finished on the podium in Lyon, chased by both Chardons and Chester Weber in a three-way tie on 7 points.

Berths to Bordeaux are far from decided, however, with legs still remaining in Stockholm, Geneva, London, Mechelen, and Leipzig.