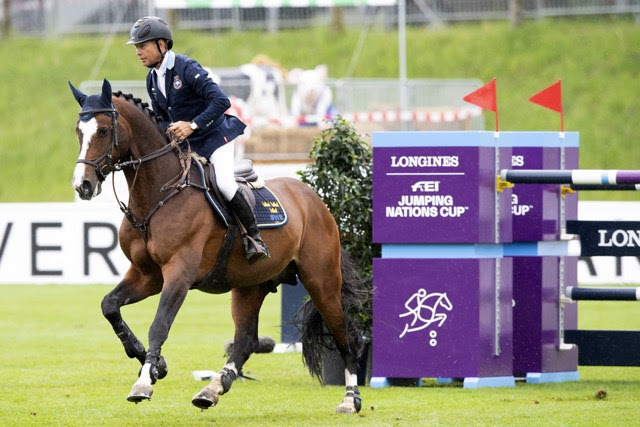 Sweden pipped Germany in a third-round showdown against the clock to win the opening leg of the Longines FEI Jumping Nations Cup™ 2021 Division 1 series at St Gallen in Switzerland today.

On a dramatic day of top sport in the Grundenmoos Arena where the tradition of wet weather conditions once again played its part, it came down to a face-off between Sweden’s Rolf-Goran Bengtsson and Germany’s Christian Kukuk. And super-cool Bengtsson sealed it with a brilliant run on his 12-year-old stallion Ermindo W.

From a starting field of 10 nations, only nine returned for the second round when the British opted to withdraw. And on a tough afternoon, when many of the teams finished with big scores, the closing stages turned into a cliff-hanger.

Swiss course designers Gerard Lachat and Reto Ruflin set them a testing track on which nothing could be taken for granted. Looping turns and dog-leg distances had to be accurately ridden, and the triple combination at fence four claimed plenty of victims. The bending line from the vertical at seven to the triple-bar at eight and the following water-tray oxer at nine also saw plenty of action, while the penultimate double at fence 11 was highly influential, with the flimsy white plank on top of the vertical second element falling time and again.

Team Egypt sprang a surprise when tying for the lead with Germany going into the second round with just five faults on the board, while the Swiss were in third carrying eight and the Swedes were close behind with nine at the halfway point.

Brazil, Britain, Israel, The Netherlands, Mexico and Italy were lying in that order as round two began, but the serious business of the day was played out between the leading four countries, and it went right down to the wire.

The Egyptians slipped out of contention when adding 20 faults despite very smart performances from Mohamed Talaat and his lovely stallion Darshan and just four in the second round for Friday’s Longines Grand Prix winner Nayel Nassar who brought out Darry Lou today, the gelding originally competed by American star Beezie Madden.

The unrelenting rain led to several breaks in the competition to attend to the grass footing in the arena, but the horses coped well and the tension increased as Germany, Switzerland and Sweden continued to slog it out.

Christian Kukuk and Mumbai matched their first-round score of eight but German hopes were bolstered by a brilliant clear from Maurice Tebbel and Don Diarado. However the troublesome water-tray oxer at nine hit for the floor for Andre Thieme and DSP Chakaria and when Philipp Weishaupt’s Asathir clipped the second element of the penultimate double then Germany had to add eight more to their scoreline for a total of 13.

Meanwhile the Swiss crowd, small in numbers due to pandemic restrictions but full of voice for their home runners, screamed with delight when their hero and individual European champion Martin Fuchs returned a double-clear with his exciting gelding Leone Jei.

Luck played its part however, the fabulous grey clearing the open water at fence five with another spectacular leap but creating heart-stopping moments along the way when hitting the back bar of the water-tray oxer at nine very hard, and also tapping the top of the plank at the second-last which had fallen so easily for many others.

When compatriot, Steve Guerdat, retired Venard de Cerisy after having two down, then the four faults collected by both Bryan Balsiger and Twentytwo des Biches and Beat Mandli with Dsarie had to be counted bringing their scoreline to 16. Assured of third place, the home team would now sit back and watch Germany and Sweden decide the final result.

First into the third-round jump-off, Bengtsson didn’t flinch, setting off with a determined run that saw him take a risky right-hand turn to the vertical second-last and clearing the final Longines oxer in a fast 43.50 seconds. It was vintage stuff from the man whose career highlights include the individual European title in 2011, team and individual silver at separate Olympic Games and fourth individually at the 2014 FEI World Equestrian Games™ with brilliant horses like Ninja la Silla and Casall ASK. And the 12-year-old stallion Ermindo W certainly gave his all today.

Germany’s Kukuk also set off with fire in his belly, but when Mumbai hit the third fence then he took his foot off the gas to complete the course with an additional time fault. Second place would have to be good enough for his country on this highly competitive afternoon.

Talking about the choice of Bengtsson for the jump-off, team-mate Douglas Lindelow said he was the right man for the job. “Rolf is very experienced and always very calm, and he performed splendidly and put plenty of pressure on Christian”, he said.

Swedish Chef d’Equipe, Henrik Ankarcrona, was thrilled with his team.

"We have never won the Nations Cup here and my riders were fantastic today. The Organising Committee did a great job for the second round, taking the time to have a longer break to take care of the footing and it turned out very well"

“My horse is still inexperienced at that level but he showed all his potential today. Sometimes it is not easy to handle his temperament, but today we managed it”, said Martin Fuchs. “I rode him here two years ago in the young horses classes at St Gallen, so it’s special to come back and jump a double-clear in the Nations Cup with him today!”, he added.

And it was a special day for Swiss team manager Michel Sorg too. “This was my first time as Chef d Equipe at a 5* show, and being at home made it even more special.

“We are so grateful that the sport could take place, and with some public it was even nicer and we are happy with our results this week. Next week we are going to La Baule and we will have Martin, Steve, Beat and Elian Bauman as Elian was so good here in the Grand Prix”, he said.

However they’ll have to face the Swedes again at the French fixture. And on current form, they’ll prove tough nuts to crack.